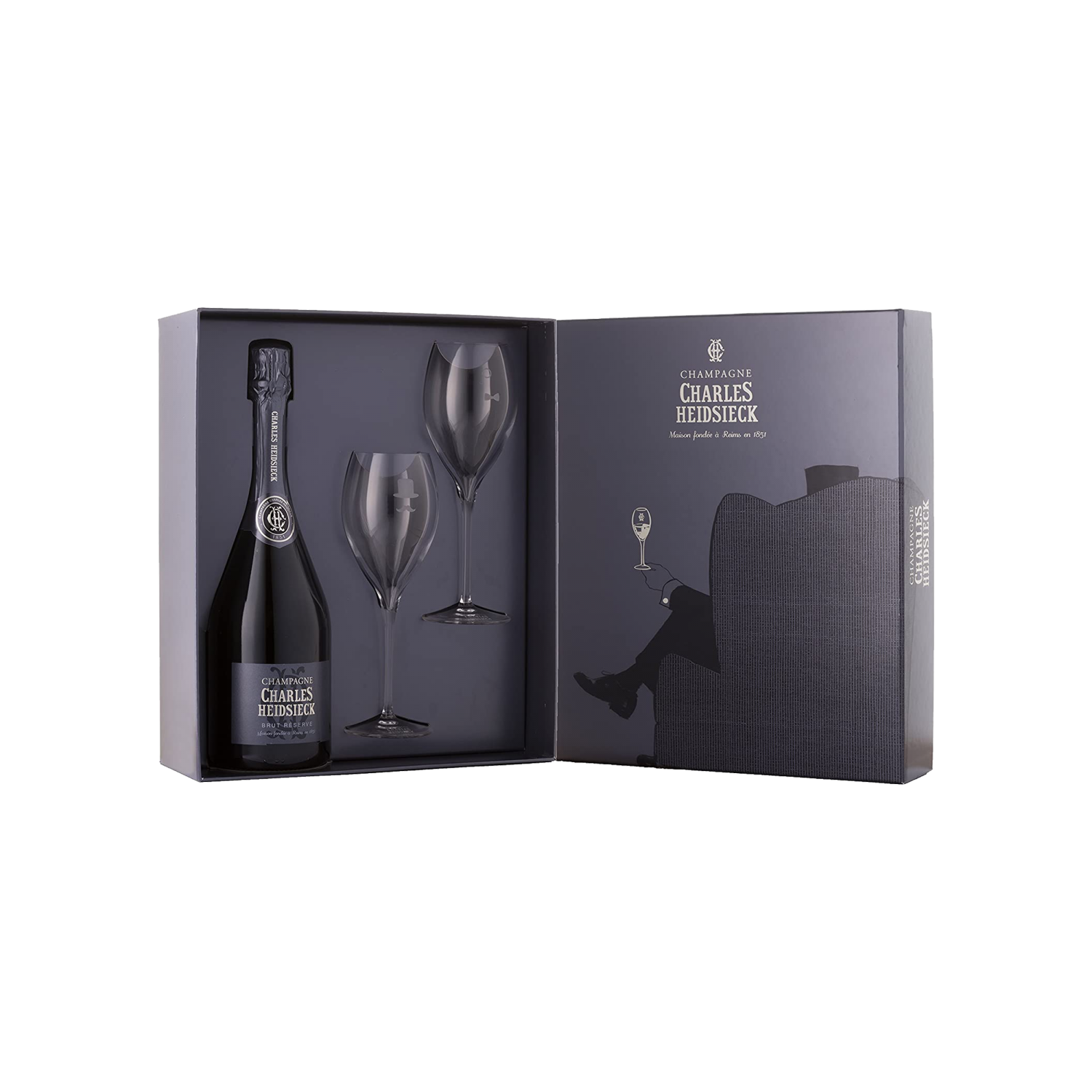 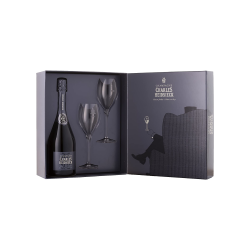 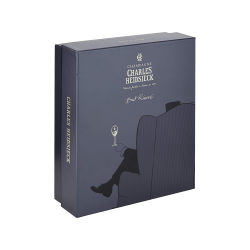 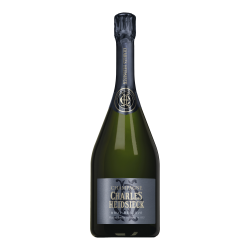 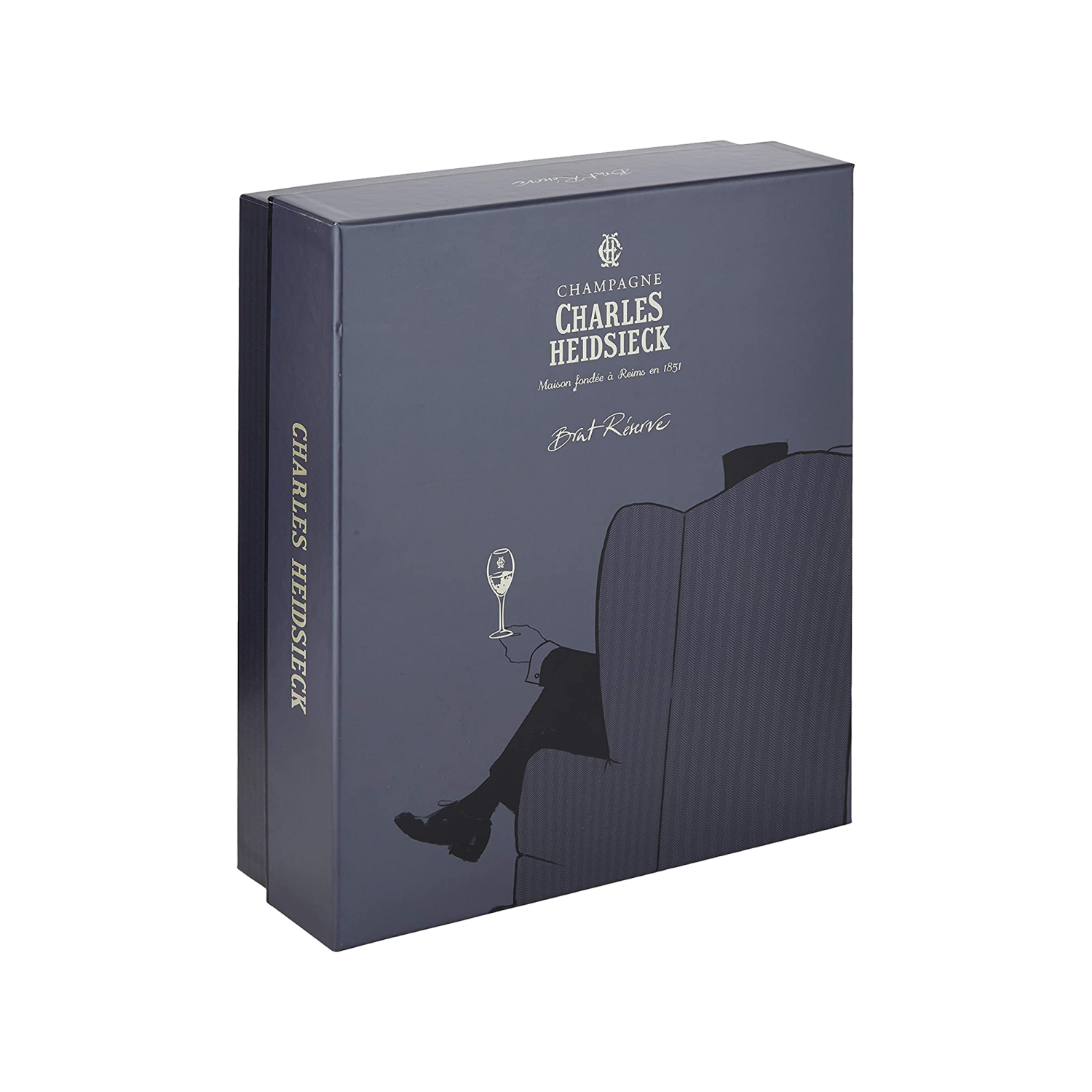 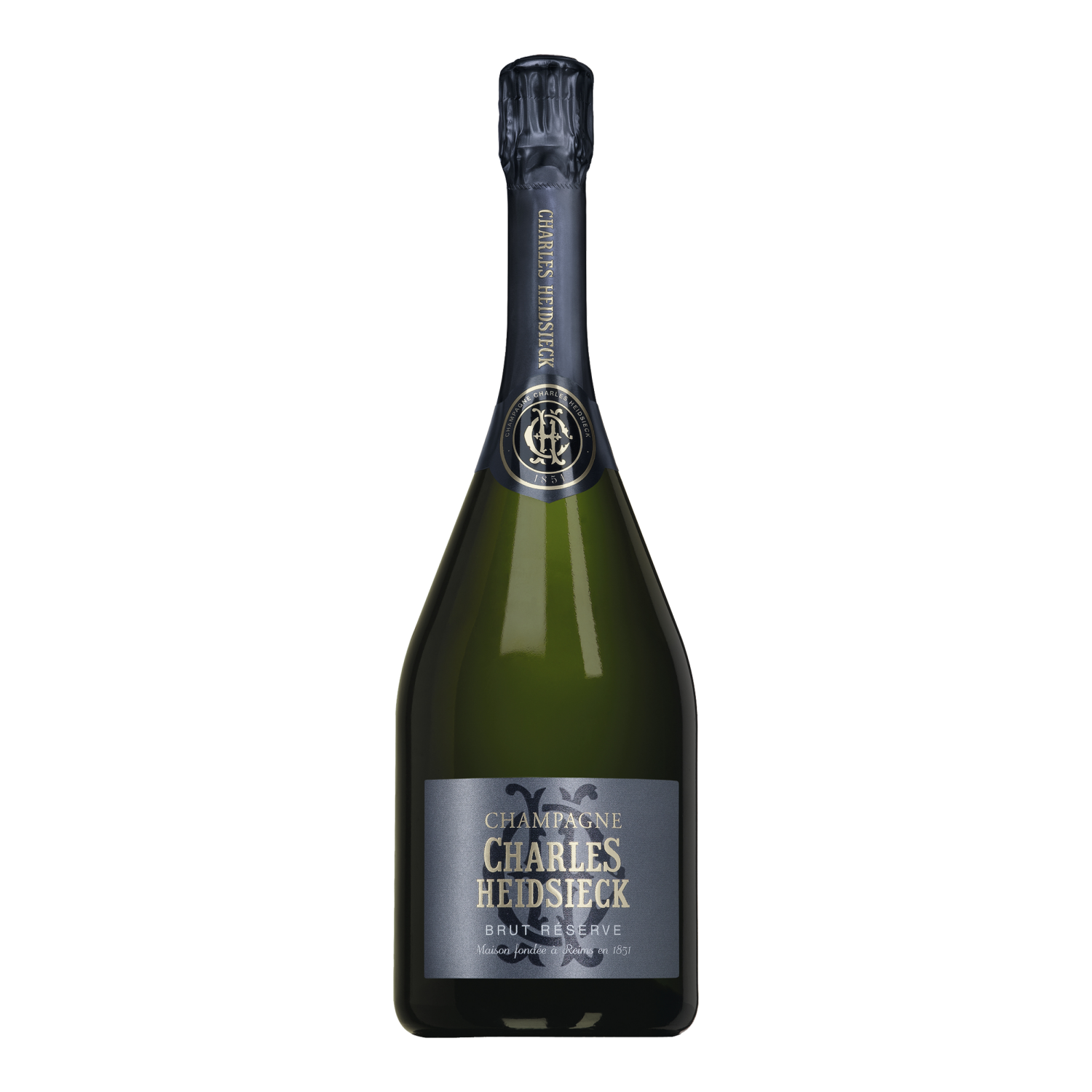 Bought directly from Charles Heidsieck's UK agent Liberty Wines, this is currently held in bond at London City Bond Eton Park, where it is cellared in ideal conditions and for same day deliveries small quantities are held in our London offices in a top of the range Eurocave
Factsheet
Description & Technical Information
-
Of the three Champagne houses named Heidsieck - all originating from families once related - Charles is the smallest and arguably, the best. Established in 1851 by the nephew of Piper-Heidsieck's owner, Charles Heidsieck himself was the original 'Champagne Charlie'. In 2011 both Charles Heidsieck and Piper-Heidsieck were bought by EPI Group headed by Christopher Descours, he has provided significant finance for both Houses allowing them to grow their vineyard holdings, grape purchasing and production. Today, production occurs alongside sister company Piper-Heidsieck in an ultra-modern functional wine-making facility on the southern outskirts of Reims. The Charles Heidsieck Cellars are a Unesco World Heritage site and comprise more than eight kilometres of chalk tunnels interlinking forty seven subterranean cathedrals called Crayères, reaching 30 metres high and believed to have been dug out in the 3rd century.

Charles Heidsieck Brut Réserve NV contains a blend of 46% reserve wines, with an average age of ten years and spends three years ageing on the lees. To achieve the depth and complexity of the House style, Chef de Cave, Cyril Brut sees the reserve wines used in the blending in two categories; 5-10 years old are added for fruit and freshness, whilst the older reserve wines, 10-20 years old are like spices, added for complexity and intensity and only needed in small quantities. It is this large proportion of mature reserve wines that makes Brut Réserve NV one of the world's best non-vintage champagnes.

The limited edition Armchair gift set features specially designed glassware branded with Champagne Charlie designs of a monocle and bow tie on one flute and a top hat and moustache on the other.

We are currently selling Charles Heidsieck Brut Réserve NV based on 2016 harvest, 54% of the blend is from 2016 and 46% are reserves wines. This is also the first time their NV contains barrel fermented wines, 6% have been added to broaden the texture and add a hint of spice.

Tasting Note: Pale gold with fine and persistent bubbles, this has wonderfully complex aromas of ripe apricot and almond. On the palate it's extremely creamy, rich and fresh and also surprisingly nutty - likely a consequence of the age and high percentage of reserve wines. This is without doubt one of the best non-vintages around.

This Charles Heidsieck Brut Reserve Glasses Gift Set includes one bottle of Charles Heidsieck brut Reserve NV 75cl and two elegant champagne glasses presented in a Limited Edition branded gift box.
Champagne Charles Heidsieck Overview
+
Of the three Champagne houses named Heidsieck - all originating from families once related - Charles is the smallest and arguably, the best. Established in 1851 by the nephew of Piper-Heidsieck's owner, Charles Heidsieck himself was the original 'Champagne Charlie'. He gained the nickname during his travels around America in the mid-19th Century - a country whose introduction to Champagne is credited to Charles. In 2011 both Charles Heidsieck and Piper-Heidsieck were bought by EPI Group headed by Christopher Descours, he has provided significant finance for both Houses allowing them to grow their vineyard holdings, grape purchasing and production. The brands are now growing their sales quite fast after many decades of decline. Today, production occurs alongside sister company Piper-Heidsieck in an ultra-modern functional wine-making facility on the southern outskirts of Reims.

Suitable for Vegans - no animal derivatives are used in the making of Charles Heidsieck Champagnes.
Charles Heidsieck History
Expert Reviews
92/100
Essi Avellan MW
“This 2016 based Brut Réserve is the first release to include a small proportion of oak-vinified wines. The proportion of reserve wine has crept up to 46%. Its softly and deeply fruity nose comes with refined, subtle toastiness and sweet coconut, vanilla and candied fruit aromas. There is still tightness on the fresh and vivacious lemony palate that harnesses both power and richness, but its best feature is the already caressingly smooth texture.”
Club Oenologique
Jan 2021
18/20
Julia Harding MW
“Based on the 2016 vintage. 40% Pinot Noir, 19% Pinot Meunier, 41% Chardonnay. Dosage 10 g/l. This is the first MEC that has some oak influence: 6% barrel-aged for texture. 46% reserve wine, the oldest is Cramant 1996. Average age of reserve wines is 10 years. Disgorged January 2020 and the first vintage to be bottled using the jetting technique and Diam Mytik closure. Full malo as on all these wines, though current winemaker Cyril Brun is keeping some no-malo reserve wines as a weapon against climate change.
Subtle lemony nose. Stony, too, with the merest hint of white blossom, holds up really well in the glass. The smoky, reductive character is very slight but highlights the mineral/stony aspect. The citrus fruit and peel are ripe but there is masses of tension. The mousse is fine and gentle and also lasts really well in the glass. Becomes a little more toasty with air. Deep yet extremely refined, pulling in to a precise finish.”
JancisRobinson.com
Feb 2021
93/100
Essi Avellan MW
“Age-complexed, plentiful coffee and cream, vanilla-laden super toasty nose with dried fruit sweetness. Yeasty fullness charms on the mellow, complex and concentrated palate. Velvety without losing its vitality. Blockbuster style with immaculate freshness and seamlessness. Beautiful. A guaranteed crowd-pleaser and many-fold award-winner - Gold at the 2014 CSWWC.”
EssiAvellan.com
Apr 2016
93/100
Tom Cannavan
“For the fourth year myself and my colleagues presented our Ultimate Champagne Evening that truly was an embarrassment of riches with magnificent wines like the Krug Grand Cuvée, the Cristal 1995 and the Dom Pérignon P2-1998 just brilliant. But as each costs £100 or considerably more, I've plumped for my value for money star of the evening: with up to 40% of old reserve wines, the nose is mature and nutty, with so much toasty brioche richness and a fat, ripe nectarine fruit too, but then the palate shimmers with elegant and delightful acid balance. A great Champagne.”
Wine-Pages.com
Dec 2015
93/100
Alison Napjus
“A rich and toasty style that’s framed by vivid acidity, this shows lovely integration and an expressive palate of coffee liqueur, baked peach and roasted hazelnut.”
WineSpectator.com
Sep 2015
93/100
Alison Napjus
“Rich and creamy, this harmonious Champagne is expressive, with brioche, crystallized honey, black currant and toasted marshmallow flavours, accented by hints of verbena, baked peach and chopped nut. Vibrant and focused through to the lasting, saline tinged finish.”
WineSpectator.com
Sep 2015
17/20
Jancis Robinson MW
“2010 base. Disgorged March 2017, to be released at the end of 2017. No 2009 base was made so they jumped to a 2010 base.
Extremely powerful nose powers out of the glass! A certain sweet creaminess on the nose. Really quite rich. Very much more rounded and welcoming than the blend based on 2008. Not that many houses have a seven-year-old NV on the market! Real bullseye for the Charles style. Tastes readier than the 2008 base – a real standout.
Drink 2017-2022”
JancisRobinson.com
Sep 2017
88/100
Richard Juhlin
“From a hundred or so villages and 40% reserve wines Daniel Thibault makes one of the very best non-vintage champagnes produced by a large house. With a couple of years extra storage in the bottle it develops a high-class nose of toasted bread and a long complex fruitiness with a smooth aftertaste of toffee.”
ChampagneClub.com
May 2015
89/100
Stephan Reinhardt
“Blended with a high percentage of matured reserve wines, this NV Brut Reserve is based on 2008 and was disgorged in 2014. Clear and complex on the nose, this is a round and elegant, highly finesse-full and lifted cuvée with a silky texture ,and delicate nougat and herbal flavors. The minty finish reveals a remarkably good structure.”
RobertParker.com
Jun 2016
91/100
Josh Reynolds
“Light, bright orange. Intensely perfumed scents of raspberry, orange zest, white flowers and chalky minerals. Juicy and precise in the mouth, offering vibrant red berry and blood orange flavors and a complicating hint of brioche. The floral quality comes back strong on the very long, incisive finish, which features a subtle anise quality and smoky minerality.”
VinousMedia.com
Jan 2015
17.5/20
Jancis Robinson MW
“Complex nose and very well balanced palate. Seems definitely ready.”
JancisRobinson.com
May 2014
93/100
Roger Voss
“Fresh and fruity while also rich and full in the mouth, this is a superbly balanced nonvintage selection. It is not quite dry with its apple and citrus fruits both given some softness. Disgorged in 2012, it already has two years bottle age that has rounded out the wine.”
winemag.com
Dec 2014
90/100
Gilbert & Gaillard
“Beautiful light gold. Endearing nose intermixing fruity, brioche and biscuit notes. Fleshy, full and melted palate showing lovely refined bubbles and freshness. Closely-integrated and harmonious. A nicely crafted dry Champagne.”
gilbertgaillard.com
Oct 2012
86/100
Antonio Galloni
“A fresh, floral wine with attractive pear and apple fruit, and an accessible personality”
VinousMedia.com
Oct 2008
See All Reviews
+
Customer Reviews Log in to write review Write a guest review
News Articles
See All Related Articles
+
More Charles Heidsieck Champagnes