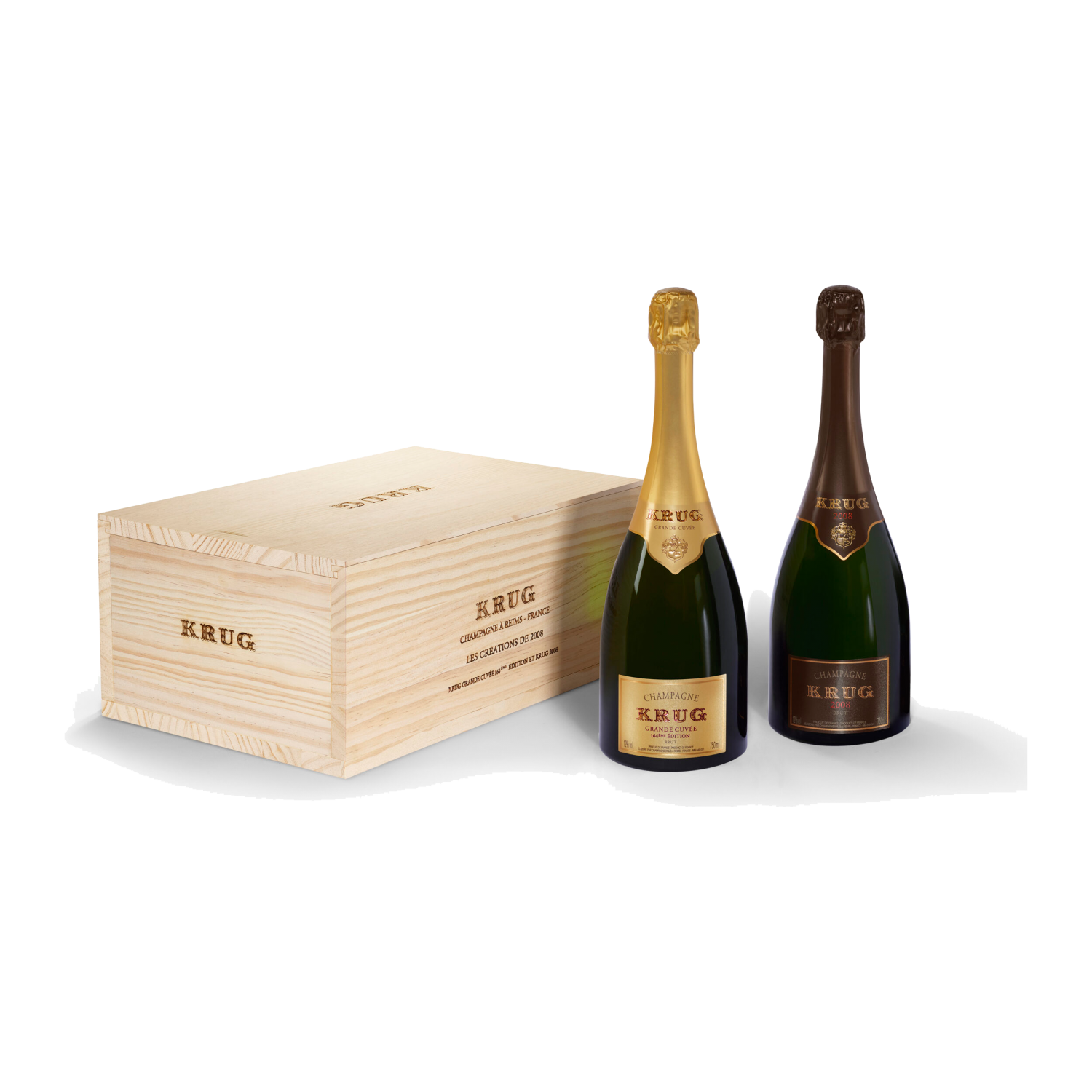 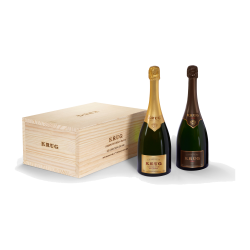 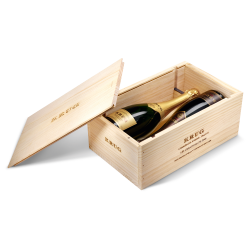 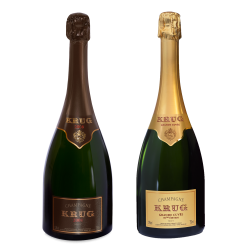 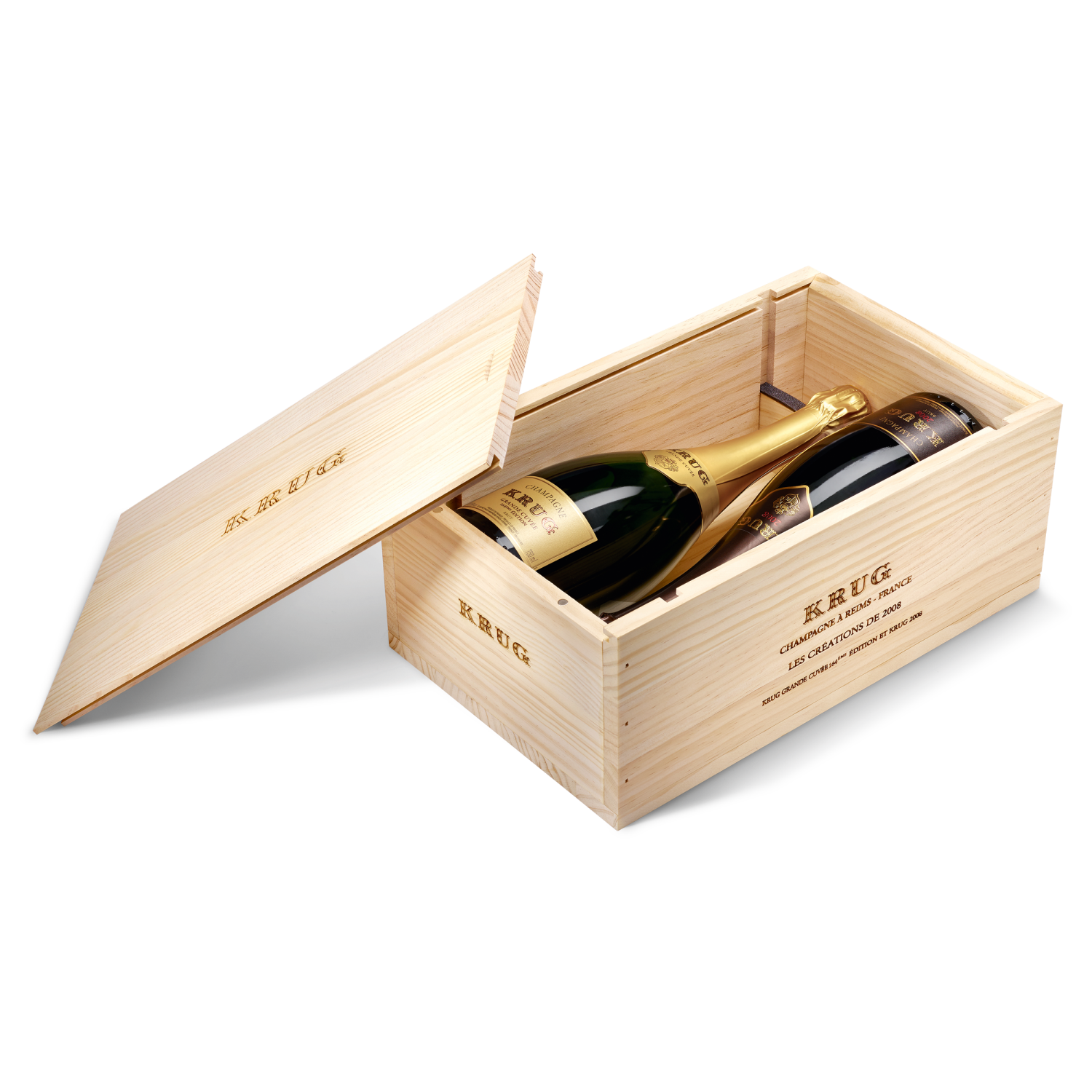 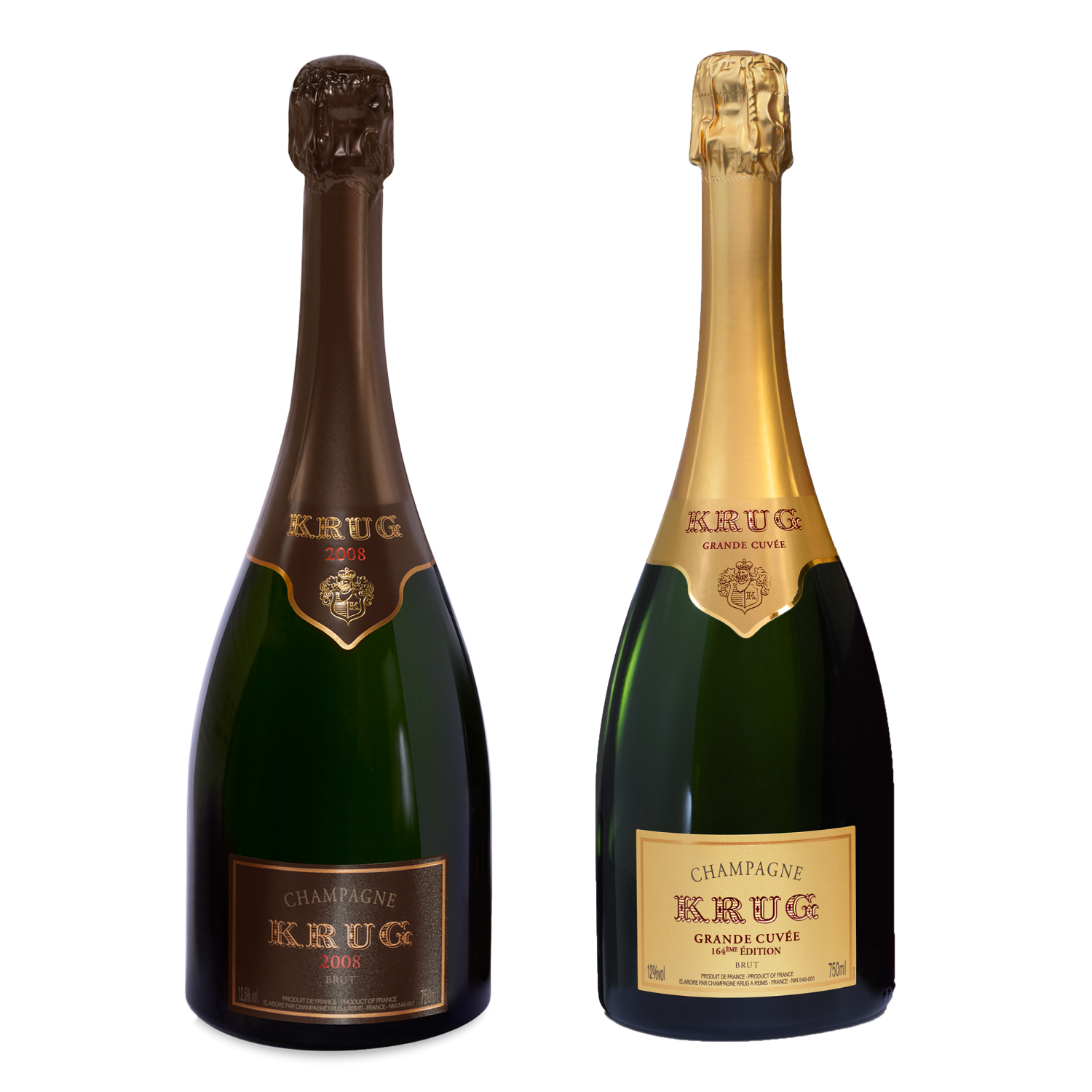 Bought directly from Moët Hennessy, this is currently held in bond at London City Bond Eton Park, where it is cellared in ideal conditions and for same day deliveries small quantities are held in our London offices in a top of the range Eurocave
Factsheet

In Stock
Delivery Requires up to 2 Working Days Stored at our Out of London Warehouse
Description & Technical Information
-
This Limited Edition Krug Les Creations is a decadent celebration of one of Champagne's superb vintages. This case includes one 75cl bottle of Krug Grande Cuvée Edition 164 NV (based on 2008) and one 75cl of Krug 2008.

Weather: 2008 was one of Champagne’s coolest in 14 years, and also one of the region’s least sunny in almost half a century. It was a classic northern climate, one that has not been seen much since. Rainfall was normal, the summer was dry, and temperatures were constant throughout the growing season. This absence of extremes resulted in slow and steady grape maturation. Under these circumstances, the fruit was intense, elegant and beautifully structured. Heterogeneity in the vines brought great complexity, with a full spectrum flavours and aromas observed upon harvest.

Each bottle of Krug has a Krug ID on the back label which enables you to discover the story of that very bottle. You can do so using the smartphone App or on the Krug website.

Krug Les Creations 2008 includes two 75cl bottles as described, presented in a beautifully crafted and branded wooden case (as shown in the picture on the left).

See expert reviews below for tasting notes.
Champagne Krug Overview
+
Just five years after Joseph Krug founded his eponymous Champagne House in 1843, he documented his great vision for Krug in a cherry-red leather notebook. In it, he revealed the principles of creating a champagne of incredible richness yet great elegance, of selecting only the finest elements from the greatest terroirs, rejecting mediocre fruit and making both a non-vintage and a vintage cuvée - revolutionary at the time. Discovered in 2010 by current House Director and sixth generation of the founding family Olivier Krug, the ideals in this notebook and Krug's resolute commitment to them have secured their position as the most luxurious and exclusive of all Champagne producers.

Cellar Master: Julie Cavil
Winery Location: Reims | Champagne, France
Champagne Region: Montagne de Reims
Annual Production (bottles): 760,000
Krug History
Expert Reviews
100/100
James Suckling
“Exceptional freshness with aromas of flinty white stones, flowers, almonds and lemons. There’s hazelnut and strawberry here, too. Complex. The palate has a long, powerful and smooth-honed feel with very assertive citrus flavors, driven by long acidity. A perfect 2008.”
Jamessuckling.com
Oct 2021
94+/100
William Kelley
“Krug's 2008 Brut is slated to be released at the end of 2021, but any readers who purchase the wine will need to exercise considerably more patience if they are to enjoy it in its prime, as it is very tightly wound out of the gates. Unwinding in the glass with a youthfully discreet bouquet of clear honey, dried fruit, walnut oil, Meyer lemon and rock salt, it's medium to full-bodied, deep and incisive, with a racy spine of acidity, a pretty pinpoint mousse and a penetrating, saline finish. The polar stylistic opposite of the rich, demonstrative 2006, the 2008 is a rather understated, taut vintage from Krug that isn't as liberally endowed with the house's characteristic toasty patina as its immediate predecessor.”
robertparker.com
Sep 2021
97/100
Antonio Galloni
“The 2008 Vintage is a nervy, electrifying Champagne, the likes of which has not emerged from Krug's cellars since the magical 1996. Bright and sculpted, with tremendous precision, the 2008 dazzles from start to finish. Stylistically, the 2008 doesn't have the toastiness or explosive breadth often found in young Krug, but that in no way detracts from its magnificent beauty.”
vinous.com
Aug 2021
18+/20
Jancis Robinson MW
“Pale greenish coppery colour. Intense evolved nose. A certain nuttiness and lots of lime flavour. Masses of acidity still but real depth too. Light bitterness. Lack of flesh. Structure dominates the filling. Mineral, almost wet cement on nose! Very dry finish. This one should run and run. Extremely zesty. Krug 2008. ”
Jancisrobinson.com
Apr 2021
97/100
Antonio Galloni
“A stellar Champagne, Krug's NV Grande Cuvée 164ème Édition, (2008 base vintage) is painfully tight. The 164 is a fabulous wine, but readers should not fall into the temptation of opening a bottle anytime soon. Crushed rocks, slate, mint, sage and white pepper lend striking aromatic brightness. The 164 is just as compelling as it has always been. Even so, it needs time to be at its very best. The 164 is a blend based on 2008, with reserve wines back to 1990. Krug ID: 316031.”
Vinous.com
Nov 2021
98/100
Essi Avellan
“Deep, brilliant gold-hued colour. Expressive, stylishly oak-lined, brioche, apple, and honey nose with luscious vanilla and perky spicy complexity. Voluptious and intense the palate is particularly firm and feisty with beautiful vivacity and tight acid line. Elegant, detailed and packed with life.”
essiavellan.com
Apr 2017
18/20
Jancis Robinson MW
“Based on 2008. Very dense mouthful with a significantly dry finish. Decidedly intellectual rather than a wine for glugging.
Drink 2017-2025”
JancisRobinson.com
Sep 2017
95/100
William Kelley
“Based on the 2008 vintage complemented by some 22% reserve wines, Krug's NV Grande Cuvée 164ème Édition opens in the glass with notes of warm bread, crisp yellow orchard fruit, mandarin, buttered toast and smoke. Medium to full-bodied, fleshy and textural, it's rich and vinous but incisive, with fine depth at the core, tangy acids and an elegant pinpoint mousse. More complete than its vintaged sibling in 2008, it does share some of the latter's reserve and is still a few years from its peak, even if it's already approachable with great pleasure now.”
RobertParker.com
Sep 2021
See All Reviews
+
Customer Reviews Log in to write review Write a guest review
News Articles
See All Related Articles
+
More Krug Champagnes 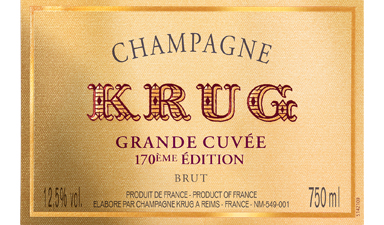 A must have in your cellar based on the 2014 harvest! 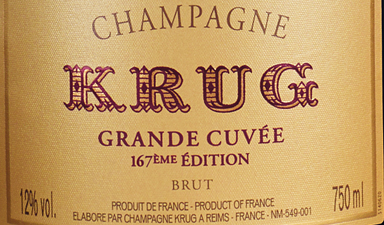 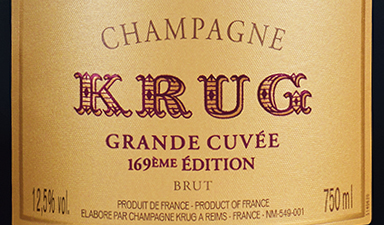 A must have in your cellar based on the 2013 harvest!
See All Krug Champagnes
+