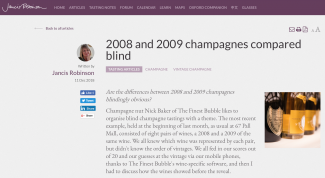 “Champagne nut Nick Baker of The Finest Bubble likes to organise blind champagne tastings with a theme. The most recent example, held at the beginning of last month, as usual at 67 Pall Mall, consisted of eight pairs of wines, a 2008 and a 2009 of the same wine.

These two vintages have very different reputations and profiles. In theory, 2008 conforms to the pattern of several French vintages ending with an 8, being rather tight and slow to unfurl â€“ although in the case of champagne in particular, this is accompanied by an extremely high reputation.

Much more expressive already are the 2009s, made from a noticeably easier, riper vintage. Indeed several houses have decided to launch their 2009s before their 2008s, including Dom PÃ©rignon, which usually launches its wines in strictly chronological order.”