We visited Champagne Palmer & Co in Reims last week to catch up with Managing Director Remi Vervier, discuss the recent harvest, and have a snoop around the cellars. After the pandemonium of an abundant harvest 2018Â – one that will no doubt go down in history as one of the greatest ever (check out a video here)Â – the house was unusually quiet, basking in a glorious Friday-afternoon serenity.

“We have seen big harvests before… but harvests so big, with such good quality all over the region… this is very rare,” began Vervier. Edible grapes during harvest is usually a positive indicator of the quality of the resulting wines. At Palmer & Co, the grapes weren’t just edible, they were delicious. “You could eat the grapes with lots of pleasure; they were very, very tasty,” Vervier told us. “With such high quality, high volume and no pressure regarding the weather, everyone was relaxed and smiling.”

At Palmer & Co, the policy is to pick the grapes at a potential alcohol level between 10 and 11%. “After 11%, you lose a lot of acidity, Vervier said. “We aim to pick at 10.5% with a high level of acidity. The average in the winery this year is 10.3% potential alcohol.”

Although the first tasting of the still wines is another month away yet, expectations are sky-high at Palmer. “When near the press, you can smell the aromas… it is a powerful year,” Vervier said. Asked for a vintage comparison, he commented: “I am too young! With lots of intensity, purity and freshness… 2018 is not similar to any recent year.” He did add though, that the oldest members of the Palmer team were reminded of 1970 and 1959. Comparative vintages aside, 2018 is sure to delight.

Moving down into the cellars, we were surprised to find several carvings on the chalk walls (pictured right). Vervier explained that, being between 18-20m deep underground, the cellars had provided a safe refuge for soldiers during the wars. Some soldiers took to carving images on the walls and since then, other significant associates of the house have left their marks as well, lending the cool, dark cellars an atmosphere steeped in rich history.

Art sculpture aside, our underground mission in Reims was to locate the huge bottles that Palmer & Co famously ferment in. To produce bottle sizes above magnum (1.5L), most houses will ferment the wine in regular bottle size and transfer the champagne into a larger bottle post-fermentation. However, Palmer & Co are one of only two houses to conduct secondary fermentation in bottle sizes above magnum, from Jeroboam (3L) all the way up to Nebuchadnezzar (15L). Bottles of this size are incredibly rare; we managed to find around 100-150 Methuselah’s (6L), including Palmer & Co Vintage 1996 and 1999, and around 50 Nebuchadnezzar’s, including Palmer & Co Vintage 2015.

Our taste buds now fully whetted, Vervier was kind enough to share a selection of late-disgorged Palmer & Co Vintage Collection, including 2000 and 1999. As we tasted, Vervier explained the genesis of this fascinating range: “Palmer Collection was not originally for the consumer. It was for the winemakers to come back to the style and see the evolution over the years. When you see how the evolution goes, you can understand the wines, see how vintages will evolve, and, ultimately, feel the style.”

Vintage Collection 1999 had all the signatures of a warm vintage: very tropical, lots of chalky character and freshness, but the Vintage Collection 2000 had unfortunately succumbed to its cork somewhat. In response to the growing propensity of technological corks in champagne, Palmer & Co have been experimenting with Mytik corks for the past year. “We conduct triangular tastings [the objective of which is to spot the odd one out] each month, assessing their effects at various stages post-disgorgement,” Vervier told us. Although they are currently up to 9 months post-disgorgementÂ with no differences observed, Vervier is not convinced that it suits the Palmer style. “Absolutely no oxygen… I’m not sure it’s a good thing. We will see.”

Looking forward to our Vintage 208 vs Vintage 2009 tasting with Jancis Robinson MW in two week’s time – during which guests will compare both Palmer & Co Vintage 2008 andÂ Palmer & Co Vintage 2009, Vervier commented: “Personally, I think 08 is better than 02 because of the concentration of the 08â€¦ 02 is more on the eleganceâ€¦ 08 is such a strong vintage, lots of character. And 2009 is a great wine… greater than we expected.” Anyone wishing to discover which vintage they prefer can purchase tickets to the tasting here. 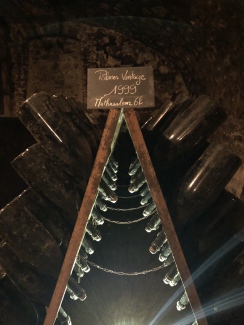 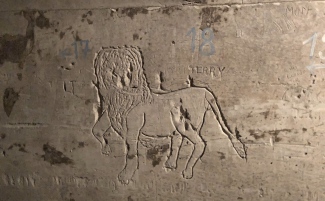 A carving in the walls of the underground chalk cellars 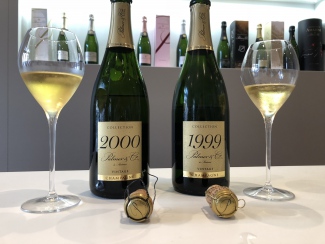 A combined lees ageing of over 30 years!