There is a biodynamic revolution happening in Champagne and Leclerc Briant are one of the producers leading the charge. Having undergone their own rebirth and renovation since being bought by American investors in 2012, Leclerc Briant are now a prominent and utterly unique force in the region.

Thanks in part due to the unconventional belief system of renowned winemaker HervÃ© Jestin – whoÂ advocates a bioenergetic approachÂ to winemaking (transferring natural energy through living systems into the wine) – Leclerc Briant are known for doing things a little differently. During a recent trip to Champagne with Jancis Robinson MW, we visited HervÃ© Jestin and general managerÂ FrÃ©dÃ©ric Zeimett at the house in Ã‰pernay to learn more about their current practices and their distinct range of champagnes.

Walking through the cellars, one can’t help but spot the many different types of vessel that Leclerc Briant use to ferment their wines – most notably a gold-lined barrel which “allows more connection with cosmic activity”. Concrete eggs however, which have become popular for fermentation in Champagne of late and which Leclerc Briant store horizontally as there is “too much lees movement in the vertical position”, will be phased out. The transfer of potassium is apparently too high when using the eggs, thus Jestin and his team are looking at experimenting with other materials, such as sandstone, glass and porcelain.

Another technique set to change is the use of taille in their blend. The taille de cuvÃ©e is the 500 litres of juice pressed after the coeur de cuvÃ©eÂ (the first 2,050 litres of juice) and was previously fermented and discarded by Leclerc Briant. Going forward however, Jestin has decided to use 10% of the taille in the blend, as it adds favourable characteristics.

Currently, Leclerc Briant own 14 hectares of vineyard, which supply 50% of their production needs. The other 50% is bought from 12 grape suppliers, all of which farm organically, some of which farm biodynamically. When spraying their own vineyards, Leclerc Briant use a small amount of wine from the previous harvest, to “introduce last season’s wine to this season’s vine”.

Our tasting began with Brut RosÃ©, which although not labelled as a vintage champagne, is produced entirely from a single harvest. Alongside the current 2016 release, we tasted the completed 2018 blend, which has 10% Pinot Noir red wine from Les Riceys. It has many years of ageing to undergo before release, but showcased wonderful hints of red wine tannins and looked very promising at this early pre-bottling stage.

The grapes used in the Blanc de Meuniers blend, a rare 100% Pinot Meunier champagne, hail from the Premier Cru village of Chamery in the Montagne de Reims. While it is a zero dosage champagne, it has some natural residual sugar and a really meaty, smoky character; a result of its 100% oak fermentation.

The second edition ofÂ much talked-about underwater-aged champagne Abyss 2013Â will be based on the 2018 vintage and produced slightly differently than the first. Though other champagne producers are experimenting with underwater ageing, Jestin believes the difference with Abyss lies in its blend, which has been perfected for the second release. “The idea is toÂ choose vineyards sitting on pure chalk… Abyss 2018 has Pinot Noir from Mareuil-sur-AÃ¿, Chardonnay from Montgueux, andÂ Pinot Meunier from Chamery.” Jestin also mentioned they have done analysis to ensure that “zero seawater” is coming into the bottles.

MillÃ©sime 2014, another zero dosage but one that will have “2-3 grams of residual sugar”; La Croisette 2014, their local single vineyard from Ã‰pernay; Grand Blanc MillÃ©sime 2013, containing fruit primarily from Avize and Cramant; and Les Basses PriÃ¨res 2014, a tiny single vineyard in Premier Cru village Hautvillers, are all powerful examples of different champagne styles produced in connection with nature, with little or no dosage added.

We concluded our visit with a top-secret project, declassified for our lucky palates. A personal project of Jestin’s, the champagne is a Vintage 2008Â made entirely from biodynamic fruit, with zero sulphur and zero dosage added. The blend is 50% Chardonnay, 25% Pinot Noir, and 25% Pinot Meunier. It was vinified in both barrel and stainless steel, before being bottled in June 2009. Only 2,800 bottles were made and the one we tasted was disgorged the morning of our visit.

Despite there being zero sulphur dioxide, Jestin believes it will age for “several years”. The bottle we tasted certainly had no sign of oxidation and was fresh and ripe, with all the finesse and texture of the vintage. A very interesting project to watch out for in the future. 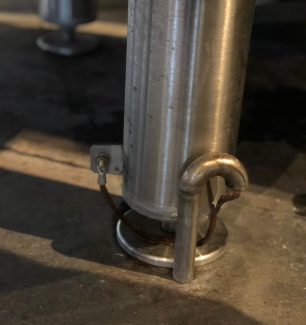 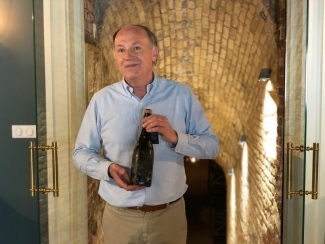 HervÃ© Jestin advocates the production of champagne in connection with nature 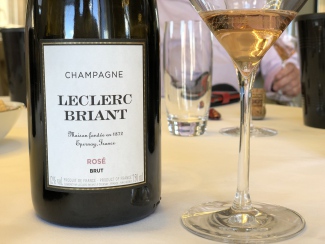 Although not labelled as such, Brut RosÃ© is a vintage champagne (the vintage is displayed on the back label, however) 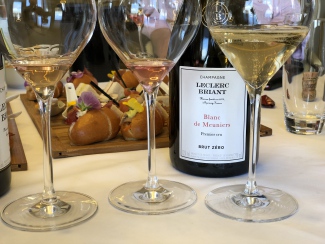 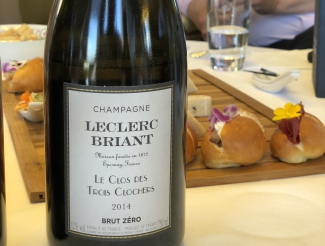 Produced from a tiny 0.3 hectare plot in Villers-Allerand