We visited Billecart-Salmon twice this year. Firstly in the spring, for a vins clairs tasting with new chef de cave Florent Nys; and secondly in the summer, for a more comprehensive tour, tasting and lunch with recently appointed chief executive and seventh generation family member Mathieu Roland-Billecart.

If Billecart-Salmon were a school, our first visit would have been a science class. Taking place in the all-white laboratory/office/tasting room of ex-pharmacist ‘Professor’ Nys, we sampled the component ingredients that make up the blends, learning about the importance of sugar levels, pH, and malic acid.

Our second visit then, was a merge of history, geography… and physical education. Scurrying around beneath Mareuil-sur-Aÿ with our teacher Mr Roland-Billecart, we seemed to cover most of the village’s expansive network of tunnels, resurfacing at various backstreet cellar doors only to descend back down again across the road, like moles in a very elaborate, expensive, effervescent molehill.

Though they share the land with three other houses and countless other growers, the Billecarts appear to practically own Mareuil-sur-Aÿ. It’s 1,200 inhabitants must by now be accustomed to their numerous visitors: we encountered at least three tour groups on our whistle-stop adventure (Mathieu told us they have an experienced multilingual team dedicated to the task) and every back alley seemed to end in a Billecart-Salmon cellar.

Beginning at their modern reception rooms and offices in the original house, Mathieu led us through a beautifully trimmed garden that sits above the original cellars, befit with a grand old tree that apparently outdates even the most elderly buildings and, Mathieu assured us, has been tested for strength. “We don’t want it falling on the house”.

From there it was a short stroll to their most prized holding, the now-famous Clos St-Hilaire. A smidge under one hectare (0.98), the Clos was formerly an orchard until the family realised it would make an excellent vineyard, planting it with Pinot Noir grapevines in 1964. Initially, the vineyard was used to make red wine for the rosé champagnes, before eventually forming the first vintage of its own eponymous single-vineyard cuvée in 1995.

After a quick glance at the newly refrigerated press building that has been built next to the Clos (an acknowledgement of the warming climate and increasing frequency of August harvests), we ventured down the street and through a particularly impressive antique cellar door to a cavernous hall filled with 24 brand-new foudres, or oak casks. Currently, these 80 hl, thermo-regulated, hyper-modern Burgundy tanks are being domesticated with taille (the second, and inferior, pressing of the grape juice) and will be ready for use in 2-3 years.

This significant investment highlights the importance of oak in Billecart-Salmon’s winemaking approach. Clos St-Hilaire is always aged in oak, as are some of the ‘founders’ cuvées’ (an affectionate term they use for the prestige champagnes named after the founding family members), the reserve wines (although aged only, not fermented), and, more recently, the Brut Réserve.

From here we visited several other barrel rooms, passed through an inox winery, and somehow (we must confess to having lost total track of our bearings at this point), reached our final destination: a modern design tasting room and dining space located underneath the original house, or, at least, somewhere near (we think).

Our tasting began with the five non-vintage champagnes, all of which we are pleased to report, are bottled under Mytik corks. The long-term effect of these technological corks is really the only question mark remaining over their ability to eradicate TCA and ensure bottle-to-bottle consistency, thus the founders’ cuvées are still bottled under traditional cork. “People don’t buy the non-vintage for laying down, so why not use the Mytik,” was Mathieu’s logical explanation.

Two notable qualities about the NV range are their age (Billecart-Salmon are known for taking their time to release champagnes) and their reserve wine content. The newest blends are based on the 2015 harvest and they all have a minimum 30% reserve wine content; though in fact, most are more like 40% and the Brut Réserve NV is a whopping 55%(!), perhaps raising a case for it to be classified a multi-vintage rather than a non-vintage.

Over the last five years, they have steadily been introducing some oak fermentation to the Brut Réserve, for just 3-5% of the wines. Typically, the reserve wine content is mostly the previous two vintages, with some solera. The bottles do come with a QR code on the back, though it doesn’t yet tell consumers the age of the cuvée, as Mathieu does not currently “have the marketing resources to do this”.

Their Extra Brut NV is the same champagne as Brut Réserve, but treated to an extra year of lees ageing and given no dosage. Although therefore technically a non-dosé, it is labelled Extra Brut as the “tasting in the glass is more important” – presumably, than any label. The famously pale colour of the Brut Rosé NV comes from adding just 6-7% red wine, always Pinot Noir, which “allows purer fruit than Pinot Meunier”.

Blanc de Blancs NV, always produced from the same four Côte des Blancs Grand Crus – Avize, Cramant, Chouilly and Le Mesnil – utilises younger reserve wines: “we don’t look for older wines as we need freshness and salinity”. Brut Sous Bois NV is the real quirk in the range. An equal parts blend of all three grape varieties, as the name suggests it is entirely vinified in oak and aged for 2-3 years longer than the other non-vintages. It has also recently received a stylish new oak label to replace the iconic, impossible-to-miss, spirographic label of previous releases.

Billecart-Salmon’s vintage champagnes are also a few years behind most other houses. The current release is Vintage 2008, though they like to have two vintages on the market at once. With 65% Pinot Noir from hometown Mareuil-sur-Aÿ, Ambonnay and Verzy, and 35% Chardonnay from Avize, Cramant and Le Mesnil, they are looking for “cardamom, spiciness and more tension”.

There are no strict winemaking rules and decisions such as dosage, malolactic fermentation and cork vs crown cap lees ageing are made on a wine-by-wine basis. Though unconcerned with the amount of dosage added post-disgorgement, one particular tool they like to experiment with is the type and mixture of liqueur d’expedition added. Cellar master Nys views the available ingredients as “a spice rack” and the combination of reserve wines and sugars he adds varies by champagne.

They chose a dosage of just 4 g/l for the latest vintage, to “preserve the freshness of the Pinot Noir”. While they try not to focus too much on figures and fashionable trends, Mathieu acknowledged that perceptions about what consumers want can render such decisions as dosage difficult to make. He described an ever swinging pendulum between meeting consumer expectations and doing what’s best for the wine, noting that, ultimately, “you have to stay true to what you know is good”.

The vintage Blanc de Blancs has recently been renamed Cuvée Louis Salmon Blanc de Blancs, in tribute to founder Elisabeth Salmon’s brother, who was heavily involved in the creation of the house. The grapes come primarily from the Côte des Blancs: Le Mesnil is chosen for longevity and salinity; Chouilly for its delicate floral notes; Avize for the heat it brings to the blend; and Cramant for those lemony, citrus, tropical hints. The current vintage, 2006, had less than 5% oak barrel fermentation as it was “a sunny year, so didn’t need the oak”, whereas the soon-to-be-released 2007 underwent 50% oak fermentation.

Remarkably, their prestige cuvée Nicolas François Billecart has only recently transitioned from vintage 2002 to vintage 2006. “With lots of lees ageing, the wines last a lot longer at Billecart-Salmon,” said Mathieu. Although the new vintage is widely available and “ready for consumption”, there is still plenty of NFB 2002 on the market, so that consumers can “still drink 2002 if [they] like the tertiary aromas”.

The prestige cuvée rosé Elisabeth Salmon Rosé 2007 has a similarly characteristic pale pink/salmon hue to the Brut Rosé NV. The 8-9% Pinot Noir red wine blended in for colour and tannins comes from Valofroy, a south-facing vineyard of very old vines located on the slopes of Mareuil-sur-Aÿ. Apparently, it looks at first “like a very deep, red ruby colour, like Ribena … then the ageing and contact with the lees over the years gives it a much paler colour”.

Our jam-packed afternoon at Billecart-Salmon concluded with Clos Saint-Hilaire 2002 – the “best vintage on release” according to Mathieu; and some truly rare older vintages of the founders’ cuvées, each masterfully paired with an individual dish from a splendid buffet-style lunch.

Billecart-Salmon currently occupy a niche in Champagne. “We are too big to be called small and too small to be called big”. However, in Mathieu they have an ambitious and dynamic chief executive at the helm, who believes the region is currently undergoing a “revitalisation” – with the opening of luxury hotels such as Royal Champagne Hotel & Spa and an influx of enterprising restaurant and bars – and is keen to align his family business with this upward trend. 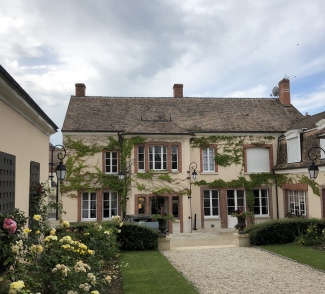 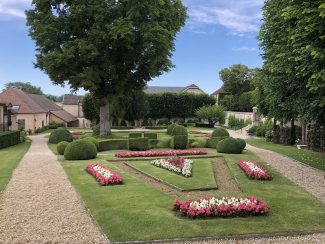 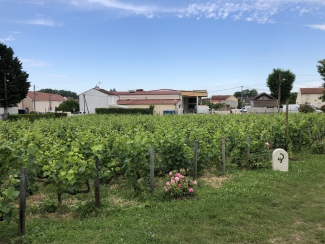 The 0.98 hectare Clos St-Hilaire is named after the village church 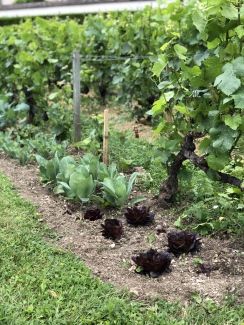 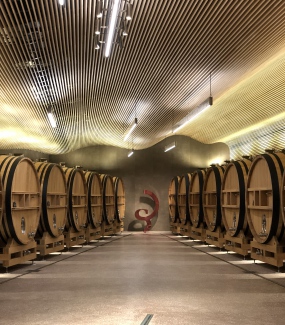 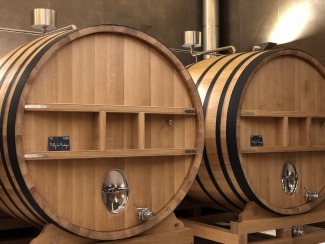 Each new 80hl foudre is thermoregulated, allowing the winemakers to manipulate the temperature 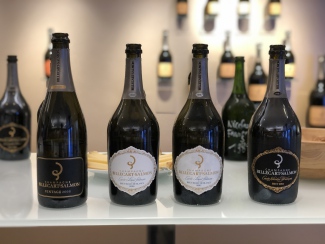 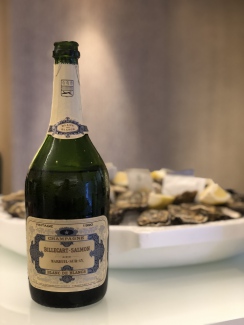