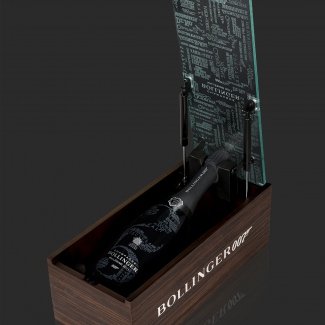 The glass panel opens to reveal the jet-black Bollinger 2011 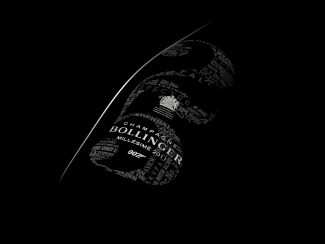 To mark the release of the upcoming movie No Time To Die, the 25th instalment of the James Bond series, the House has created a limited edition wine dedicated to 007, with a 2011 vintage inspired by the world of Bond. The jet-black 75cl bottle is adorned with the number “25”, formed from the titles of the previous films, which are similarly etched on the glass of the wooden box. The engineering of the wooden/glass case is to replicate the scene in GoldenEye when 007 opens the compartment in his Aston Martin DB5 to reveal Bollinger. The 2011 vintage, an atypical year, inspired Cellar Master to produce a unique champagne, created entirely from Pinot Noir from the Grand Cru village of Aÿ, where the House was first established in 1829. This is the first time that both the vintage and village have been used exclusively by Bollinger to make a dedicated wine. The excellent 2011 harvest in Aÿ, produced complex, powerful and harmonious Pinot Noirs, fully expressed in this characterful wine.

Alongside the new film release, 2019 marks forty years since the release of Moonraker, which featured James Bond whose mission took him on an outer space adventure. It was also the movie on which the Bond and Bollinger partnership began. To celebrate their 40 year partnership, Champagne Bollinger and 007 pay tribute to their shared heritage and revisit the space shuttle created by legendary production designer Ken Adam. Champagne Bollinger enlisted designer Eric Berthes to re-imagine the Moonraker space shuttle. Crafted from pewter and wood veneer, encasing a Saint Louis crystal ice bucket and a magnum of Bollinger 2007, the Bond vintage par excellence. Each numbered piece has been crafted and finished by hand, making it unique.

Only 407 Limited Editions have been created, please call us for availability. 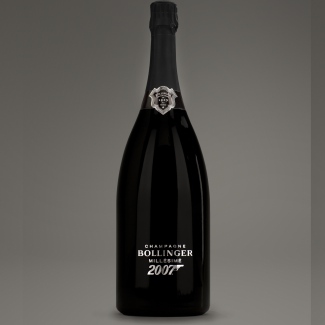 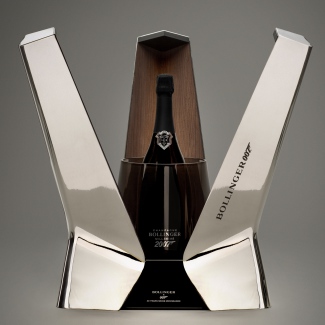 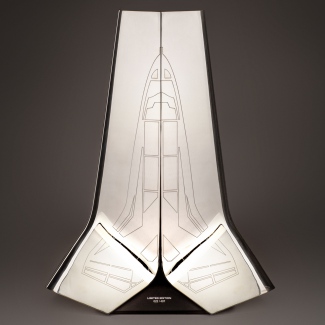 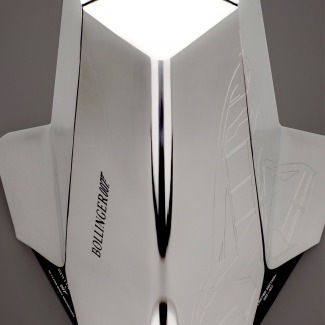 Top view of the Moonraker