In early March every year, Champagne Bollinger invite guests to their house in AÃ¿ to tour the vineyards and cellars and taste a selection of vins clairs from the previous vintage. We managed to find time with Chef de Cave Gilles DescÃ´tes during this busy period to talk (and taste) all things 2017. Our visit concluded with a magnificent champagne lunch. 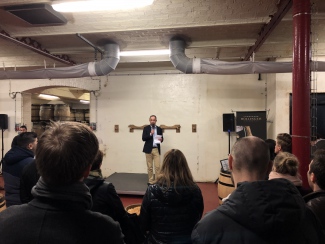 “The vintage started well,”Â DescÃ´tes began. “We had dry weather in the winter and although we lost 10% of the vineyards to spring frosts, there was still potential for it to be a vintage harvest.” However, despite a positively uneventful June and July, the weather in August eventually determined the fate of 2017. “It was one of the worst Augusts,”Â DescÃ´tes said. A rainy and cold climate prompted the spread of botrytis throughout their vineyards. “Usually we have a ‘Champagne Miracle’ – the sun comes out and its perfect for ripening. Instead we had warm and wet weather… which is worse in terms of botrytis,” he added.

By the time harvest began, much of the damage was done. Bollinger typically pick their vineyards in around 21 days. In 2017, they picked in 9 days. Particularly affected was their hometown, the Grand Cru rated village of AÃ¿ in the east of the VallÃ©e de la Marne. Normally picked in 12 days, AÃ¿ was last year picked in just 4 days. “We had to stop picking everywhere else and bring all our pickers to AÃ¿ to try and save the best of it,”Â DescÃ´tes told us.

Unfortunately the complications were evident in some of the vins clairs we tasted. The Pinot Noir from AÃ¿, usually fruit forward, generous and rich, had just a touch of those characteristics and fell quite flat in the middle. Because of their reliance on Pinot Noir, Bollinger decided quite early on that 2017 would not be a vintage year and emptied the barrels quickly. “Most of our barrels are empty. This is one of the very rare years at Bollinger where there is more Chardonnay in barrels than Pinot Noir,”Â DescÃ´tes said.

However, it wasn’t all bad news. Bollinger have been experimenting with some of the older grape varieties rarely seen in Champagne, something DescÃ´tes is clearly quite proud of as he couldn’t wait to show us the wines they produced in 2017. Although Chardonnay, Pinot Noir and Pinot Meunier are often considered the only three grape varieties in the region (they cover 99.9% of the vineyard surface), there are actually four other grape varieties permitted to be grown – Arbane, Petit Meslier, Pinot Blanc and Pinot Gris. Once quite common in Champagne, they are now all but extinct, with just a few hectares remaining today.

Of these other varieties, Bollinger are experimenting with Arbane, Petit Meslier and Pinot Gris – all white grape (‘blanc’) varieties. They planted vineyards as long ago as 2004, however the severe frosts in 2010 destroyed many of the vines and they had to be re-planted in 2011. Now, more than six years later, they are starting to see some promising results.

DescÃ´tes noted that these other varieties are known for their particularly high acidity, which is an interesting component in light of the changes global warming is having on Champagne viticulture. Many believe the warming climate has produced a pattern of earlier ripening periods, higher levels of alcohol and lower levels of acidity. Arbane and Petit Meslier appear to be ripening slightly earlier, although DescÃ´tes acknowledged it is difficult to be conclusive with such young vines. It will be very interesting to see what these vineyards produce in the future.

According to DescÃ´tes, the last vintage as difficult for Bollinger as 2017 was 1893. What with the troublesome year and the Pinot Noir dominance of their non-vintage champagne, Bollinger had to use nearly 50% reserve wines in the Special CuvÃ©e blend this year. Typically in years when vintage champagnes are not made, the non-vintage blend is strengthened as all the best wines can be utilised. This certainly seems to be the case with the Special CuvÃ©e 2017 base vintageÂ blend – rich and oaky as ever, it was tasting impressively fresh and elegant. One to watch when it hits the market in 3-4 years. 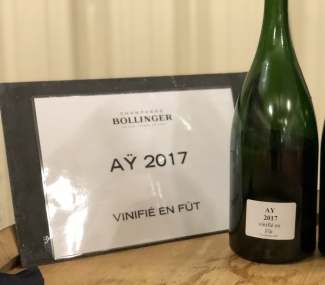 A difficult year for the village of AÃ¿ 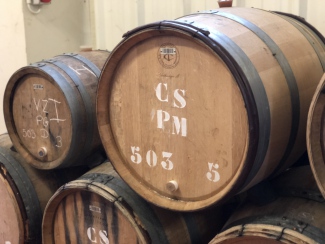 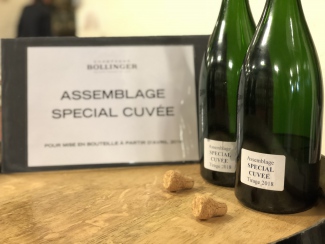 With 50% reserve wines, the special cuvÃ©e blend is as declicious as ever 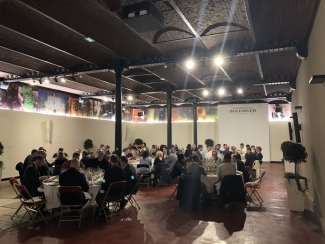 A marvellous champagne lunch at the Bollinger winery 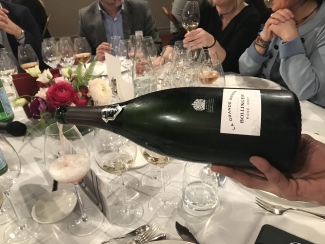 To conclude our base wine tasting, we sampled a range of reserve wines. Bollinger are famed forÂ their extensive store of reserve magnums – one of the ‘five pillars of Bollinger‘. Given the higher percentage of reserve wine in the 2017 Special CuvÃ©e blend, it was interesting to taste some of the reserves that contributed to it. A particular standout was the Verzenay 2006 aged in magnum, which had all the ripe fruit freshness to be expected from such a warm and generous vintage.

A truly splendid morning at Bollinger ended with a grand lunch at the winery, paired with a fitting selection of grand champagnes. The occasion was a celebration of 2017 – although not the best for the vineyards, it marked the tenth vintage since newly promoted COO JÃ©rÃ´me Philippon joined the house and was the first vintage for new General Manager Charles-Armand de Belenet. Appropriately, the lunch also coincided with the launch of newÂ Bollinger La Grande AnnÃ©e RosÃ© 2007, which we were fortunate enough to taste from magnum. This is the first time La Grande AnnÃ©e RosÃ© has been released in magnum and a jeroboam is also now available.