Champagne Bollinger have had much to celebrate recently. After a difficult 2017 harvest – which, being particularly challenging for Pinot Noir, hit Bollinger even harder than most – the abundantly ripe, rich and healthy crop of the record-breaking 2018 harvest was met with jubilation by chef de cave Gilles Descôtes, who described it as “the best harvest of my life”.

On top of that, the house launched one of their very best vintage champagnes, La Grande Anneé 2008, earlier this spring, and, after several filming setbacks, the latest instalment in the film franchise of their biggest fictional fan, James Bond, finally has a concrete release date. Alongside the film the House has created a limited edition wine dedicated to 007, with a 2011 vintage inspired by the world of Bond. The jet-black 75cl bottle is adorned with the number “25”, formed from the titles of the previous films, which are similarly etched on the glass of the wooden box. See the spectacular special edition Moonraker and the 007 Limited Edition 2011.

The lavish LGA 2008 launch event at The Ledbury in London therefore, had an especially joyous feel to it and was attended by the UK wine trade’s finest – including Jancis Robinson MW, whom we travelled to Champagne with this summer. Between sips of the brilliant new vintage (from bottle, magnum and jeroboam!), Jancis and Descôtes pondered interesting tasting topics for our forthcoming visit to the Maison and settled on the idea of exploring wines from classically ‘hot’ vintages, in view of the scorching growing season just gone.

Unfortunately, Descôtes couldn’t attend our appointment in Aÿ and we were instead greeted by his capable deputy, Denis Bunner, and Bollinger’s general manager, Charles-Armand de Belenet. As promised, the winemaking team had prepared a remarkable tasting of wines from the region’s most sizzling seasons (dating as far back as 1947!); preceded by an interesting comparison of different base vintages of the house NV, Special Cuvée; and rounded off with a hat-trick of R.D.’s.

Before any of that however, we had to locate our tasting room. We’ve tasted all over their premises in Aÿ: in the winery during vins clairs week; in one of the many finely decorated reception rooms of the main house; and direct from barrel with Descôtes. On this occasion though, we were invited into the private chambers of the chef de cave. Directly above above the cellar master’s office lies an intimate tasting room, accessed by a narrow, wooden spiral staircase hidden behind an unassuming oak door. The arching stained glass windows on all sides lend the room a sacred, almost holy, ambience.

Bunner began proceedings by showcasing a few of their special ingredients: the reserve wine magnums for which the house are so well-known. At any one time Bollinger have around 700,000 reserve wine magnums, representing around a third of their total reserve wine stocks. They are kept solely for Special Cuvée, to which they typically contribute 5-10% of the final blend, usually from five or six different years and five or six different crus (the remainder of the non-vintage reserve wine content comes from tanks, which are kept for a maximum of four years). Around 3,000 of these magnums are kept in La Réserve, a recently renovated gallery in the cellars that houses some of their most prized vintages and crus.

These magnums are a winemaker’s dream, opening up endless blending possibilities when creating the all-important non-vintage champagne. They are stored under cork closure (rather than crown cap), with the lees still in the bottle (they were kept upright for 24 hours before our tasting so that the lees settled) and just a hint of fizz (1.4 bars). Remarkably, the team taste test around 80,000 of the reserve wine magnums every year, which, stored as they are under traditional cork and agrafe, is a significant undertaking. “The reserve magnums are like a spice rack … like adding a little touch of salt during cooking,” said Bunner – the third such reference to a ‘spice rack’ by a chef de cave of our summer Champagne trip.

Verzenay (the “atomic bomb”) and Aÿ (the “backbone of the Special Cuvée blend”) make up more than a third of Special Cuvée each year. As a demonstration of their influence on the final blend and of the difference in general between each annual release, we were shown four different base vintages of Special Cuvée, from the current (2015) release, back to 2011.

As each was an original disgorgement having undergone three years of lees ageing, much of the variation we saw was also attributable to the differing periods of post-disgorgement ageing, upon which Bunner places considerable importance. “The difference comes from the disgorgement date, it’s not just the contact with the lees. The wine has started a new life [post-disgorgement] … you have cork and oxygen. The more time you wait after disgorgement, the more phenolics and creaminess you see.”

Our exploration of hot vintages and their potential for ageing covered four of the region’s warmest years: 2003, 1989, 1976 and 1947. It is somewhat of a cliché in Champagne to say that August is the most important month for grape development (it even comes with its own saying: août fait le moût), however cichés survive for relaying at least some truth, and Bunner was keen to remind us of the key role that exceptionally warm August weather played in the evolution of these ‘solar vintages’.

The first, 2003, a year in which picking started on 25th August (making it the earliest harvest since 1893), was so different from the typical house style that it wasn’t released under the La Grande Année label. Simply called 2003 by Bollinger, it was so unique the team wanted to “celebrate this astonishing year in [their] own way”. There were just 80 days between flowering and harvest in 2003 (typically the growing season takes around 100 days) and the grapes were picked at 10.5% potential alcohol and 5.5 g/l sulphuric acid. Although the dosage given was just 7.5 g/l, the high acidity makes the sugar seem much more prominent.

Prior to 1990 Bollinger did not control malolactic conversion in the winery, hence the following three vintages would had around 1 g/l of malic acid left in the wines. Apposite to 2003, La Grande Année 1989 is “very much the Bollinger style … very dense and savoury.” The harvest began on 13th September and the grapes were picked at 7.3 g/l sulphuric acid. No R.D. was produced in 1989.

R.D. 1976 (“one of the driest vintages ever”) had a much different nose, all tertiary aromas: chocolate, coffee and a touch of tobacco. The year just missed out on being an August harvest, with picking commencing on 1st September. When our final solar champagne, R.D. 1947, was produced, the Maison was still operating under their previous title: Bollinger Renaudin. The grapes were picked at an astonishing 11-13% potential alcohol on the 5th September (“the houses must have been on holiday in August,” Bunner mused) and the champagne was still very much alive and kicking. If these vintages are anything to go by, the warming climate may not be such a bad thing after all.

Interestingly, Bunner explained how they can measure the level of pressure left in a given bottle with the use of specialist equipment. He had tested each of the older bottles that we tasted and found a consistently decreasing level of pressure: 3 bars for the 1989, 2 bars for the 1976, and just 1 bar in the bottle of 1947. “After 100 years there is almost no pressure left in the bottle and boosting it [by adding CO2] is forbidden,” he told us. 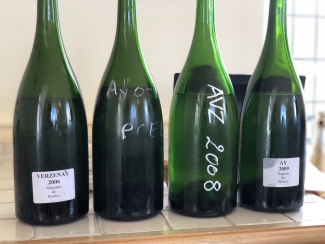 Bollinger keep over 700,000 reserve wine magnums at any one time, using them to add a touch of spice to Special Cuvée NV 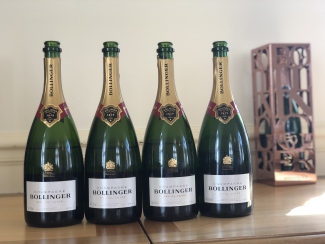 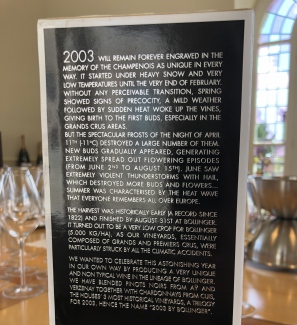 Bollinger released 2003, but not under the La Grande Année label, since it was so different from the house style 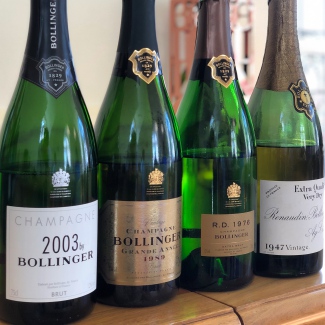 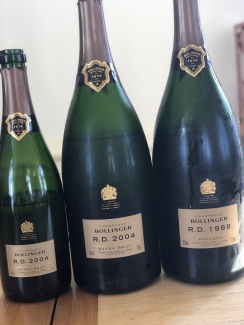