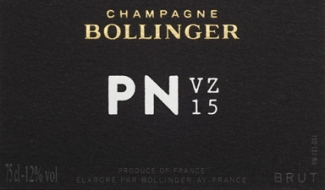 Written by Anne Krebiehl MW for The Buyer 7th July 2020

The new Bollinger PN VZ 15 was born from a challenge to his fellow three winemakers, when chef de cave Gilles Descôtes asked them to make a Blanc de Noirs across vintages and villages. The wine had to have affordability and as much volume as Grande Année so that keen consumers can actually get some. The result is “exquisitely beautiful” writes Anne Krebiehl MW, a real deep-dive into Champagne’s terroirs with Pinot Noir coming (interestingly) from Verzanay rather than Aÿ and 20% of the reserve wines coming from Bollinger’s réserves de magnum from 2009 and 2010.

“With its focus on grape variety, provenance and pure pleasure, the PN VZ 15 hits a sweet spot between geekery, craftmanship and approachability that seems finely attuned to contemporary sensibilities,” writes Krebiehl.

If there is such a thing as afterlife, if our souls really are eternal, the soul of Lily Bollinger must have smiled today. In the first permanent addition to its range in more than a decade, Bollinger presented a new cuvée that is designed to showcase origin through the prism of Pinot Noir: the new PN VZ 15.

PN VZ 15 is the first wine in a new series that will be reproduced every year from now on, always with a focus on one of Bollinger’s Pinot Noir crus, or villages. The first one happened to be Verzenay with most of the base wines from 2015 – hence the VZ 15 moniker. Most of the base wines are from Verzenay, with additions from Aÿ, Bouzy and Tauxières, and reserve wines from 2009 and 2010. Unusually, 20% of the reserve wines come from Bollinger’s réserves de magnum, i.e. reserve wines stored in magnum bottles. But let’s start at the beginning.

With Bollinger’s chef de cave Gilles Descôtes still on sick leave, it fell to general manager Charles-Armand de Belenet and deputy cellar master Denis Bunner to launch the new release. They had chosen to present this from Bollinger’s headquarters in the Pinot Noir village of Aÿ, straight from the “historic desk” of Madame Elizabeth Bollinger who ran the house from 1941 to 1971.

Armand de Belenet walked over to the window to show that Lily’s desk overlooks some of Aÿ’s best plots. One of them is the south-facing Côte aux Enfants, another the Clos des Terres Chaudes where Bollinger’s exceptional own-rooted Pinot Noir cuvée Vieilles Vignes Françaises is grown. He explained that the new cuvée was conceived as “a little brother” to Vieilles Vignes Françaises, a wine with very limited production and the only other Blanc de Noirs in the range.

It was then Bunner’s turn to recount the making of this first cuvée in the new series. Cellar master Descôtes set himself and his three fellow winemakers a challenge: each had to create a Blanc de Noirs across villages and vintages and the decision of the winning blend would be made by blind tasting. “As we worked on this project,” Bunner said, “his idea was based on the revelation of one specific terroir.

What really led us to the final choice was the taste because we were looking for the best expression of Pinot Noir for Bollinger.” He also noted that there was a sort of expectation that the new wine would be centred on the house’s home turf of Aÿ, “but it was Verzenay which won the blending session.” This exercise will now be completed every year: “Each year we will create a new cuvée, but the taste will not be constant, so we open today a new line in the Bollinger range, composed of 100% Pinot Noir which will evolve over time.”

Of the 178ha of vineyards owned by Bollinger, 104ha are planted to Pinot Noir, so the team will have a sizeable array of parcels to play with. But Bollinger also wanted to make a point of showcasing the different winemaking approaches. Thus, alongside a sample of the PN VZ 15, three mystery bottles were sent, labelled 1, 2 and 3 and sealed with a white crown cap. We had been asked to take these out of the fridge and open them about 10 minutes before the start of the launch – a set of Bollinger’s Elizabeth glasses had also been supplied. 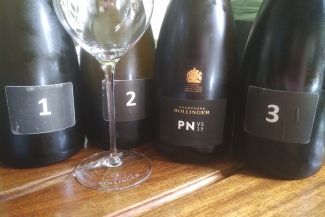 The new release and three mystery bottles for the launch tasting

Bunner asked us to taste the first two wines: clearly two base wines, fairly youthful, but strikingly different: the first one luminous with freshness, yet buffered with beautiful fruit; the second creamy and emollient. Bunner told us that both wines were 2019 Pinot Noirs from Verzenay; the first fermented in stainless steel, the second in a 10-year-old barrel. Oak fermentation is a cornerstone of Bollinger’s style and Bunnet explained that the 4000 barrels currently in use were on average 20 years old. The oaky creaminess in the second vin clair sample was down to the fact that a barrel of merely ten years of age had been used. The difference between the two base wines was immense.

The third wine, also a base wine, showed a slight mousse as it was being poured and the slightest prickle on the palate. One whiff announced that it was a reserve wine – it had none of the youthful esters of the first two samples but was strikingly sonorous. My notes read ‘lovely density, sinuous, smooth, the tiniest prickle of carbon dioxide. Creamy, concentrated, bold but effortlessly elegant.” Bunner revealed that this was a 2009 Verzenay Pinot Noir that had been kept in magnum, with a limited prise de mousse to produce just one quarter of the usual pressure and then aged under cork. This wine fascinated me: I loved its absolute suppleness and concentration, its pervasive freshness imbued with richness. It had the resonance of age but a yeast-given youthfulness. Yes, it is a base wine, but it could be drunk in its own right at the table.

“This was on lees for 10 years already,” Bunner said. “All magnums are made to enhance the intensity of our Pinot Noir and to add another layer of fruit.” He then revealed that the PN VZ 15 unusually had 20% of these réserves de magnum– usually a lot less of these precious reserves is used in blends. De Belenet calls these magnums “a kind of aromatic bomb.”

Then it was time to open the new cuvée: it turned out to be exquisitely beautiful, a lovely take on Pinot Noir that is clearly out to please with expressive fruit and convince with inherent depth. Bunner noted that the vineyards, on the mid slope of Verzenay’s two hills, were ideal for Pinot Noir, rooted in chalk but with 80cm of topsoil. Not being south-facing as Aÿ, the cooler vineyards of Verzenay are usually harvested one to two weeks later than Aÿ, giving them a longer ripening period. 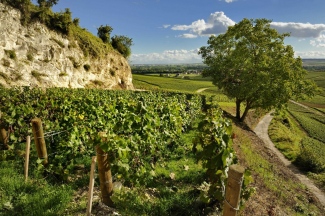 De Belenet explained that PN VZ 15 and its yet unlaunched successors were a “real deep-dive into Champagne’s terroirs.” While not disclosing the production volume, he emphasised: “The objective was to be really ambitious about this wine and to have a global distribution. It is not a limited edition, there is at least as much volume as our Grande Année. It is going to be available. The price will be in between Special Cuvée and La Grande Année. The idea is to be accessible –the starting point was that we have a wine that is affordable and accessible.”

With its focus on grape variety, provenance and pure pleasure, the PN VZ 15 hits a sweet spot between geekery, craftmanship and approachability that seems finely attuned to contemporary sensibilities. There is the acknowledgement of the land and the changing climate and the recognition that curious drinkers want to know and taste without breaking the bank. There is also a wholesome absence of pretence or bling. Very refreshing indeed. Knowing that future editions of this imaginative Blanc de Noirs are already maturing in Bollinger’s cellars is exciting. If that is not in the very spirit of Madame Lily Bollinger herself, I do not know what is.

Even the first, citric whiff conveys the famous Bollinger creaminess. This is a lemon-edged, plum-toned veil of subtlety. A little more air reveals a gorgeous edge of white pepper and rye, highlighted by lemon zest and the full-fruited juiciness of red apple. This is firmly anchored in richness but not weighed down, made supple and sinuous by glorious creaminess. It is a joyous, even hedonistic Champagne that shows the inherent richness, grace and structure of Pinot Noir – which here is lightly worn – its enduring, rounded fruit and its vivid, poised freshness. Right now this is at a beautiful and fortuitous intersection of luminous freshness, emollient texture and voluptuous fruit.