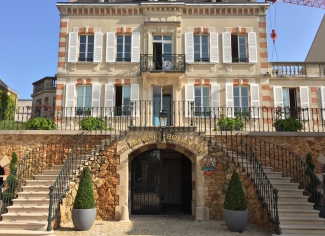 Bollinger’s decadent estate in the special village of AÃ¿

Champagne Bollinger are one of the oldest and most famous producers in the region, with a distinctive full-bodied and savoury style that is truly unique. Our visit over August bank holiday with Jancis Robinson MW was a testament to all of the above: taking in both the old and the distinctive, it was an afternoon to remember. Our appointment with COO JÃ©rÃ´me Philippon, Cellar Master Gilles DescÃ´tes and his deputy Denis Bunner began underground, in the depths of the cellars.

After discovering an abandoned room containing a stash of extremely old bottles and magnums during an inventory check in 2010, Bollinger undertook an extensive restoration project which produced two stunning showcases of treasured wines, unveiled in 2016. The first, La RÃ©serve, contains more than 3,000 magnums, spanning some 45 vintages and 16 different crus. Unlike other houses, Bollinger keep reserve wine magnums to be re-blended back into their non-vintage cuvÃ©e – the very old reserve wines discovered would have been kept for exactly that purpose and provide an unprecedented insight into how wines from different crus have aged. Wandering through this treasure trove like children in a candy store, we stumbled across a magnum of Verzenay 1893, potentially the Champagne region’s first ever magnum – just two remain, both safely guarded within the walls of La RÃ©serve. 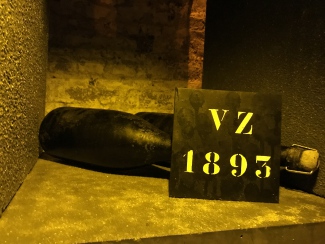 The second showcase has been named Galerie 1829, a nod to the year Champagne Bollinger was founded. This remarkable cellar contains more than 7,000 bottles (all formats) from 65 different vintages, dating all the way back to the first ever vintage, 1830. Unfortunately, of the 54 bottles of 1830 unearthed, only 13 were found to be in good condition – and after two were opened for the launch event tasting last year, just 11 now remain. The team were kind enough to volunteer a bottle of the incredible 1914 champagne to our tasting, as well as a 1928 red wine from Bouzy. All in a day’s work!

Back above ground, Gilles began our tasting with an introduction to the ‘five pillars of Bollinger’, spelt out below:

1) Vineyards: Their 170+ hectares of land supply over 50% of their total grape requirements. In 2012, the house shifted their focus to environmentally friendly winemaking and were the first producer to receive the CIVC’s sustainable viticulture certification in 2014. Earlier this year, they moved the whole company to ISO14001 – one of the greenest management systems available.

2) Pinot Noir: The red grape is a staple of the Bollinger style and provides a minimum 50% contribution to all blends, which reaches 60-80% for La Grande AnnÃ©e and 100% for Vieilles Vignes FranÃ§aises.

3) Barrel Fermentation: With over 3,500 barrels and counting, oak fermentation is a Bollinger doctrine. All of their vintage and prestige cuvÃ©e champagne is fermented in barrels, meaning they have to decide early whether or not to declare each vintage as: “if the juice touches stainless-steel, it can’t go into the vintage.” 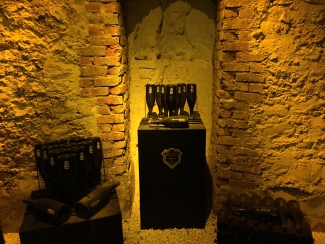 4) Reserve Magnums: A key difference at this unique house is their extensive store of reserve magnums (more on this later), with an age ranging from 5-15 years old. Eight lucky employees spend the first two months of each year opening the traditional cork and agrafe reserve magnum stoppers, so that they can be used to spice the latest Special CuvÃ©e blend.

5) Time: An important factor in Champagne that Bollinger strive very hard to capitalise upon. Their non-vintage is aged in lees for 3 years (twice the legal requirement), La Grande AnnÃ©e spends 6-10 years in the cellars and they have ongoing experiments that won’t be concluded for another 10-15 years. Time, as they say, is truly of the essence at Champagne Bollinger.

First on the tasting agenda was research for ourÂ Prestige CuvÃ©e vs Vintage tastingÂ in October 2017, during which Jancis guided guests through a comparison ofÂ La Grande AnnÃ©e 2007Â from magnum andÂ R.D. 2002Â from bottle. Gilles also showcased two older vintages of La Grande AnnÃ©e and R.D., both serving as testaments to the outstanding ageing potential of vintage Bollinger champagne. 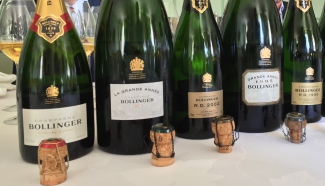 As we tasted discussion turned to the unique 2007 vintage, admired by some and dismissed by others. Gilles told us that other producers picked too soon, some as early as August 20th(!), over fears of botrytis. However, Bollinger delayed and their gamble was rewarded. Although not convinced at the time of harvest, “the first tasting was incredible” according to Gilles. Talking of the future for Bollinger’s prestige cuvÃ©e, we were told there would be no R.D. 2005, a warm year that simply had “too much fruit”. 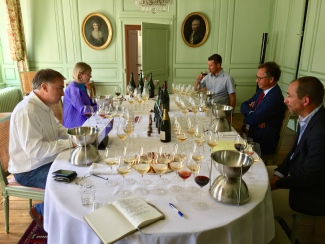 A beautiful room for an outstanding tasting

Bollinger La Grande AnnÃ©e 1995 Magnum
63% PN, 37% CH | Ageing: 7 years on the lees | Disgorged: 2003 | Jancis Score: 17.5/20
Beautiful amber golden yellow with very majestic golden bubbles, this is very alive. Has a lovely mushroom nose with creaminess and it all comes out on the palate. Seems to have a high dosage, but guessing that’s the weight of fruit. Loads of candy peel, lemon and orange and loads of that tertiary creaminess coming in and great length. 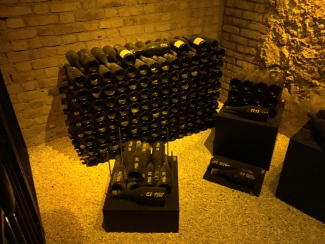 Gilles then shared with us three examples from the impressive La RÃ©serve cellar: all 2004 Pinot Noir’s from the prestigious Grand Cru rated villages of Avize, AÃ¿ and Verzenay. He explained that the reserve magnums are given a slight pressure (a prise de mousse, about a quarter of the usual addition), lending a gentle autolysis effect. When the magnums are opened, they do not do a disgorgement, so adding them to the non-vintage blend introduces some lees. Jancis was clearly impressed with Bollinger’s dedication, noting the “palaver of putting wine into magnums, ageing them and taking them out again.” Gilles simply smiled and said they couldn’t do it with jeroboams due to the logistics of moving the bottles.Â The three magnums we tasted were broad, luscious and fruit-driven, characteristic of the generous 2004 vintage.

Avize 2004:Â Lots of lemon sherbet and apple. Some reduction but adding to the complexity. Has freshness, zest and power.
AÃ¿ 2004:Â Very peachy and interesting. Lots of lovely passion fruit and mango flavours, this is very pleasant as it is. Great length.
Verzenay 2004:Â More classic Pinot Noir character and going slightly chalky. Loads of dried fruit and acidity.

We concluded our tasting in style with a bottle of the recently discovered 1914 – an iconic year in champagne during which the winemaking team were called to war in August, leaving the women to tend to the vines during the harvest – and two bottles of coteaux champenois; still red wine from the Champagne region. It was telling that the 1914 label, which was in remarkably good condition, was written in English (‘Extra Quality Very Dry’), where it was destined for sale. Still very much a wine, if we’d tasted it blind we may have assumed it to be from the 80s, but no older. Jancis commented that she had tasted “fewÂ still wines of this age”, let alone champagnes. 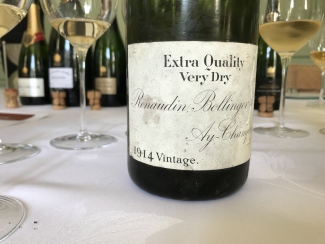 A Champagne that belongs in a museum: utterly stunning

Of the Bouzy 1928, Gilles simply said: “this is one of the top red vintages of the century”, a statement with which we weren’t inclined to disagree. Our final wine was a magnum of La CÃ´te aux Enfants 2012. Not sold between 2002 and 2009 as the house needed red wine for their rosÃ©, this is a rare creation – just 5,000 bottles were made in 2012. From a vineyard in AÃ¿ which produces very low yields, Bollinger are now selling this younger than before, after just 2-4 years of ageing.

Bollinger Renaudin Extra Quality Very Dry 1914
Jancis Score: 20/20
Beautiful golden amber with just a hint of spritz.Â Has a very distinctive nose, lots of oxidation and great texture on the palate. There is something here, a slightly spicy edge andÂ lots of orange blossom. Bundles of grapefruit on the finish and power of fruit and zestyness. Just incredible.

Bollinger Bouzy 1928
100% PN | Jancis Score: 17/20
Spiciness on the nose, some vegetal notes and what racy acidity! Has a round and sweet texture, soft tannins and cabbages, but not in a bad way. Seems very toasty, round and ripe.