Wine itself may go back many thousands of years, but the bottle we pour it from is only around three centuries old. Back when men were men and most wine was low in alcohol, the 75cl bottle was considered a suitable ration for one man with dinner; it quickly became the traditional bottle size, and has remained that way since. However, even back then, wineries would show their products in impressive, oversized bottles and for reasons unbeknown to man, these bottle sizes were given the names of Biblical figures like the evil King Nebuchadnazzar and the long-lived Methuselah.

Whilst these really large formats were fun for showing off, a popular alternative to the 75cl bottle became the 1.5L magnum; aesthetically pleasing, efficient for pouring and impressive to guests. Whilst the magnum’s boastful popularity has continued into the modern day (particularly with the night-club generation of the late twentieth century), the taste difference between wine aged in bottle and wine aged in magnum (sparkling wine especially) has been largely forgotten. And the extent to which this difference manifests itself can sometimes be very surprising… 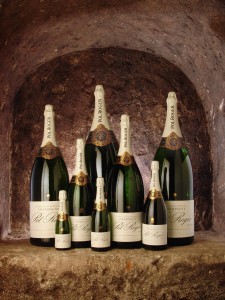 On October 8th 2014, The Finest Bubble attended Moët Hennessy’s Annual Autumn Tasting and experienced for ourselves this astounding taste difference. Although the main walkaround tasting was an enjoyable showcase of all of the LVMH brands’ new vintages, it was a small tasting afterwards that was to provide the day’s astonishment.

We were told that Cyril Brun, then senior winemaker at Veuve Clicquot (he will become chef de caves at Charles Heidsieck in May), had flown over and was hosting an informational tasting on a collection of Cave Privée’s and we were asked if we’d like to attend. Pushed for time, we almost said no….thank God we decided to stay.

Cyril began by explaining his preference for Champagne aged in magnum and commented, “People expecting a bit more from a bottle of Champagne should upgrade to a magnum.” He also added that he ‘loves’ 3L jeroboams and promised to show us exactly why. To illustrate his belief, Brun presented a series of older vintages of Veuve Clicquot Cave Privée (1982, Rosé 1979, and Rosé 1990) in standard 75cl bottles, alongside the same Champagnes aged in magnums. He also showed Cave Privée 1989 from 75cl bottle and 3L jeroboam. 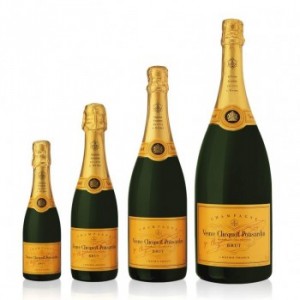 We all know that Champagne ages better in magnums and jeroboams, but the difference we saw was astronomical. The Veuve Clicquot Cave Privée 1982 was a particular standout; whilst the bottle was tasting quite mature and showing signs of oxidation, the magnum was incredibly youthful, tasting like a 10 year old!

Brun pointed out that magnums slow down the aging process as they hold twice the amount of wine than a standard bottle, but have the same ullage (the space between the bottom of the cork and the wine’s surface, a source of trace oxygen) – concurrently the magnums have an equal amount of oxygen exposed to a much greater volume of liquid. According to Brun, this reduced exposure to the effects of oxygen (which eventually will turn wine into vinegar), is the key attribute to the difference in aging. He also added that the pressure in a magnum is slightly higher, although the difference is ‘marginal’.

Interestingly, the same differences aren’t quite as pronounced in still wines; Champagnes and sparkling wines will age much better and longer in magnum than

any red or white wine. Some hypothesise that this is due to the carbon dioxide in sparkling wine, proposing that the carbon dioxide acts as a preservative, helping to keep it fresh. Another important variation with Champagne aging not to be ignored, is the matter of autolysis – a key component in creating sparkling wine. Autolysis – the gradual breakdown of yeast cells, known as lees, providing the wine with its bubbles during second fermentation – works differently in magnum. Not only can it take up to four weeks longer, but magnums also have proportionally more glass surface than bottles, allowing more contact between the lees on the inside of the bottle and the wine. This results in magnums displaying much more roundness as the wine ages and crucially, much more complexity. 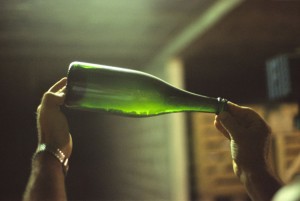 Taking this topic back to our tasting with Cyril Brun and the Cave Privée’s, when analysing our notes we noticed something very interesting on the tasting sheet provided. Highlighting the Cave Privée 1982 (the Champagne displaying the most surprising age comparison) stated that the magnum of Cave Privée 1982 had been disgorged in January 1988, whereas the bottle had been disgorged in June 2010, twenty two years later – they therefore weren’t exactly the same Champagne. However, rather than ruining the concept, this could actually enhance it – but there are two arguments. 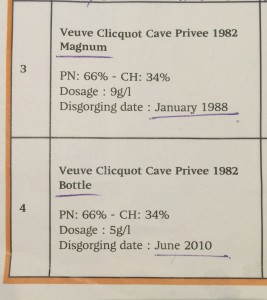 Very extended aging on the lees can leave a Champagne more susceptible to oxidation. Louis Roederer’s head winemaker, Jean-Baptiste Lecaillon highlighted this fact at a Cristal vertical tasting last year, commenting, “the more you keep it on the lees, the more sensitive it is to oxidation when you disgorge.” However, the process of autolysis during second fermentation consumes the oxygen in wine, and as explained above, the more time spent in contact with the lees, the more complex the evolution of the wine. So the bottle may have fallen foul to the extra time on the lees and displayed oxidative qualities as a result of this; or it may have developed and evolved into a much more complex Champagne with this extra aging, lending it an advantage over the magnum.

Annoyingly, we noticed this difference back at the office so couldn’t discuss the topic with Brun. It’s an interesting one though and begs two questions; if the bottle was disgorged 22 years after the magnum, does this make the difference in youthful taste more or less pronounced?; and how would a bottle disgorged in January 1988 taste comparative to the magnum? If only there were an endless supply of these Champagnes..!

One further topic worth considering in any Champagne aging discussion is the type of closure used during aging on the lees. Vincent Chaperon, winemaker at Dom Pérignon (who has notably debunked the belief that Champagne aged for an extended period on the lees is more susceptible to oxidation after disgorgement, stating that the oldest examples in Dom Pérignon’s cellars are the most stable), refers to a difference in the handling of Dom Pérignon destined for initial vintage release and Dom Pérignon intended for second or third plenitude release (P2 and P3) – and that is the choice of closure.

All the Champagne for the first release is placed under crown cap closure during second fermentation, whereas the P2 and P3 wine is sealed with a cork from the beginning. Explaining the decision, Chaperon has commented: “The crown seal is good for consistency

and better for avoiding any off-flavours, but the advantage of the cork stopper is that we have observed that after 10 years the cork is better at preserving the freshness and vibrancy of the wine, so we take the risk of greater variability.”

However, if you are going to purchase bottles for aging – a few words of caution. As the proportion of exposed wine to unexposed wine decreases exponentially as the bottle size increases, then surely the jumbo, super-sized bottles are best, right? Well, perhaps not. Magnums are usually the largest bottles in which Champagne is fermented; the larger formats have had finished Champagne decanted into them and therefore contain Champagne that is not as fresh as that found in a magnum, or even a regular bottle. So if you are buying larger bottles for aging, make sure the Champagne went directly into them, as opposed to being aged in regular-format bottles.

Further, with very young Champagnes, the regular 75cl bottle is the way to go. Too often in restaurants (and nightclubs especially), you will see young Champagne being poured from magnum – this is in fact detrimental and the magnums frequently taste fruitless and reticent at such a young age. Magnums are for laying down and should not be drunk for at least five years after disgorgement.

Another question we see coming up a lot is, how much longer is the aging process in magnum? For example if a 75cl bottle is recommended to be drank in the next 5 years, should a double-the-size magnum therefore be drank in double-the-time (10 years)? Apparently not; although it’s difficult to pinpoint an exact aging ratio, most predictions advise that magnums take around 1.5 times longer to age than the standard 75cl bottle.

Personally, we think magnum is the ideal bottle size for Champagne and so inspired where we by Brun’s showing, that we have developed the concept even further, and are putting on what promises to be the standout Champagne tasting event of the year: a bottle vs. magnum & jeroboam tasting. Hosted at 67 Pall Mall and presented by Jancis Robinson MW, we will be comparing older vintages of a range of prestige cuvée’s, such as Cristal 1996 and Krug 1998, from bottle, magnum and jeroboam where we can.

This is an exciting opportunity and should be a fantastic evening of discovery – you can find out more about the event and purchase tickets here.

We have also recently received new allocations of Krug 1998 magnums and Dom Ruinart 1998 magnums from LVMH to add to our exciting range of prestige cuvée magnums listed on the site:

There are lots of arguments to favour Champagne from magnum; there can be no doubt they age much better and much longer, they are less sensitive to temperature fluctuations, so the potential for damage due to heat or cold is decreased; they are aesthetically impressive and are great for gifting. Whatever your viewpoint, comparing your favourite Champagne from bottle with magnum is a must-do for any wine lover. Providing they have been stored correctly and are old enough to display significant age differences, you will most definitely not be disappointed with what you discover.