“In wine, location is the key ingredient. In fact, each bottle showcases an authentic characteristic of the soil, climate and temperature of the region, and the uniqueness of local growers and winemakers. When you pick a wine from Champagne, it means something to you. The word Champagne represents more than a name. It denotes a specific wine growing place.”

This statement from Comité Interprofessionnel du vin de Champagne (CIVC) leaves no room for debate: ‘Champagne’ must be from Champagne. In order to use the famous name, Champagne wines must be produced in accordance with strict criteria, but most notably they must be grown, harvested and produced within the Champagne delimited region. Since 2005 the CIVC has staunchly protected the Champagne appellation, preventing any misleading claims made by wines, retailers and even journalists (see Champagne Jayne case), that are deemed to be deceivingly dining off of Champagne’s reputation. 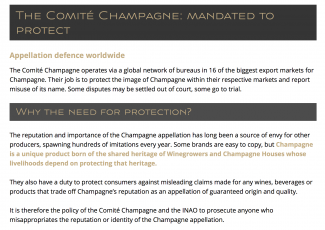 The Champagne appellation is legally protected and misuse is fiercely prosecuted

This has all been made possible by the European Commission, which granted ‘geographical indication’ (GI) status to 1,150 products across the EU’s 28 countries. This essentially means companies may only use the name of a locality if the product they are marketing is from that area. However, with Brexit looming there are concerns over the future of EU GI’s after the withdrawal of the UK.

Once the UK has left the EU, it will technically no longer have to abide by the directives, effectively paving the way for the potential renaming of goods such as ham as ‘English parma ham’ or sparkling wine as ‘English Champagne’.

The EU’s concern over the future violation of food naming laws was revealed in the latest leaked Brexit document, this time from the European parliament’s agriculture committee. The document – advising the chamber’s leaders on Brexit negotiations – states, “If no arrangements to another effect are made, the protection afforded by the above-mentioned legislation would normally cease to apply in the UK, which means that over a thousand European registered names could be exposed to violation in this neighbouring country of the EU27 [while paradoxically the 59 UK names would remain protected in the EU if the commission decisions granting this protection are not repealed].”

Most interesting is the last statement: the protected status of British foodstuffs such as Cornish pasties,

Cheddar cheese and Scotch whisky would be preserved. 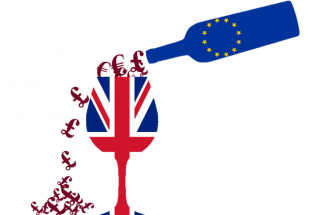 What will Brexit mean for the wine trade?

Ah, Brexit. First we were told to expect rising alcohol duty, then higher inflation due to the pound’s devaluation and now the potential loss of the protected status of foodstuffs. So what will this mean for the wine trade and for Champagne?

Rather than patriotic glee, our reaction is one of practicality: the likelihood of a new relationship being proposed to include the mutual recognition of GI’s is high. However for now, post-Brexit life is as uncertain for wine lovers as it is for anyone and only time will reveal the reality of its impact.

On the bright side, let’s hope this uncertainty over (and rising cost of) EU wine will allow English alternatives the opportunity to flourish outside of their niche and become real competitors in the wider market.