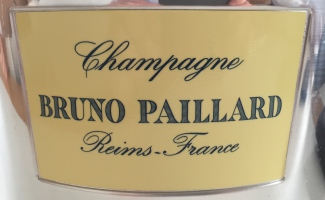 Driving into Champagne Bruno Paillard’s vast and expansive grounds just south of Reims city centre, the impressive modern winery exudes a confidence you’d expect from a house with centuries of tradition and legacy. However, this is not the story of the youngest house in Champagne. In 1981, entrepreneurial 27-year old Bruno Paillard – a descendant of a family of brokers and growers whose lineage dates back to 1704 – sold his beloved Jaguar and started a Champagne house; the first in nearly a century.

In a narrative normally reserved for Hollywood movies, Bruno’s story is equally remarkable as it is uplifting and inspiring. After following in the family’s footsteps and working as a broker for 6 years, young Bruno felt the overwhelming desire to create his own Champagne, one that would go beyond what was available in terms of purity and elegance.

In 1983, after a reclusive 3 years working like an alchemist in a rented cellar, Bruno finally reached the style of his dreams and created his first Champagne using carefully selected grapes from independent growers. Not content with an already astonishing achievement, Bruno then invented the first “ground-level” cellar – then unheard of in the region – which allowed him complete control of temperature , lighting and humidity. Soon after, the press took note and began ordaining him one of the best Champagne producers in the region. 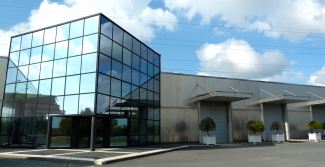 The revolutionary and ultra-modern winery

Not stopping there, Bruno built the current winery in 1990 and began purchasing vineyards in 1994. The house now owns 33 hectares across 16 villages (almost half of which are rated Grand Cru and located in the best viticulture areas in the region – astounding considering fewer than 10% of Champagne’s vineyards are classified Grand Cru), which supply 65% of production needs – amounting to an annual production of around 500,000 bottles. These vineyards are farmed organically and each harvest in done by hand according to the particularities of each parcel; a rigorous undertaking given the vineyards are subdivided into 40 different parcels.

The house continues to produce multi-vintage and vintage Champagnes in accordance with Bruno’s strong commitment to quality: each Cru is vinified separately, only first press juice is used, wines are aged for 3-5 times longer than the minimum required and consistently low dosages are added to maintain purity. Bruno Paillard also pioneered the carrying of disgorgements dates on the back label of bottles (first doing so in 1983), a quality step now being replicated by other houses. 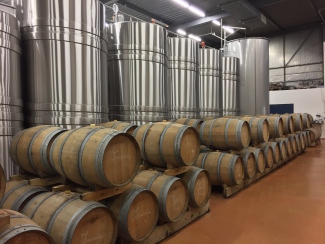 A quite sensational tale of an astute businessman chasing a dream – in just three decades, Bruno Paillard has transformed his eponymous establishment into one of the most prestigious houses in Champagne. Last month, we visited the winery alongside Essi Avellan MW to taste the 2016 Vins Clairs with Bruno’s daughter Alice Paillard, who joined the company in 2007 and now co-manages the firm.

Bruno Paillard’s policy on base wine tasting was different to other houses. “At Paillard, we only sniff the base wines – judging them on the aromatics, not on the taste,” Alice told us. An interesting concept that we thought we should embrace, though after a few minutes it was obvious it is impossible to engage the taste receptors without tasting the wines – so mouth-feel, acidity and other taste experiences couldn’t be measured – a pity we couldn’t properly assess the 2016’s at Bruno Paillard. Our tasting (/sniffing) took a practical approach, with Alice guiding us around the cellar and drawing samples from barrel ad hoc.

As we tasted, Alice gave us a brief insight into the 2016 vintage. Describing it as “a difficult year”, the house were most surprised to harvest the Chardonnay after the Pinot Noir, a common occurrence throughout the region. We began with the Chardonnay’s, of which Bruno Paillard own slightly more of than the other grape varieties. 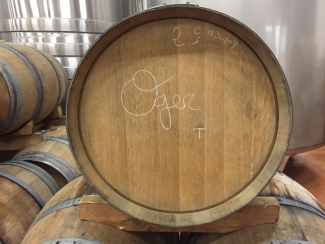 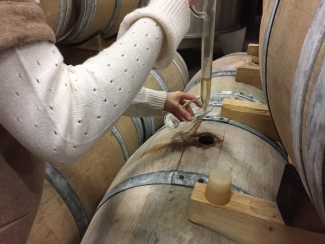 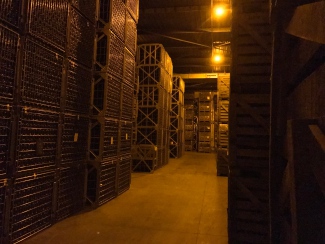 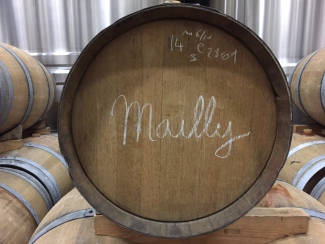 Mailly: a spicy year for this Pinot Noir 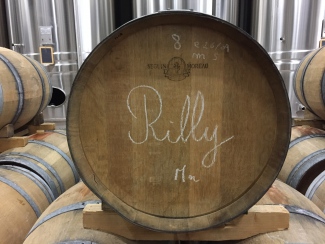 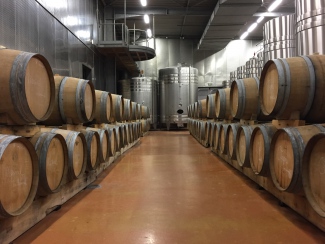 The huge modern winery in Reims

After we had sampled (on the nose at least) a good range of the 2016 base wines, Alice told us the blending process was due to begin soon and would take 5-6 weeks to complete, with the first blends finished in mid-May. As we didn’t get to taste the Vins Clairs, we are hesitant to comment on their potential with only half the picture – but they seemed to have a lot of fruit expression and were very giving on the nose. Commenting on fermentation, Alice informed us that Bruno Paillard use 20% barrel fermentation and 80% stainless-steel. The house hasn’t bought any barrels in the last four years however, and are experimenting with the subdued effect of the older oak.

After teasing us with the base wines, Alice then presented the current range of Bruno Paillard Champagnes. Explaining their philosophy on reserve wines, Alice called it a “perpetual reserve wine system”, which they withdraw from and contribute to every year. The content of reserve wine in their house non-vintage varies greatly, from as low as 25% to as high as 50% in previous years. Talking of base vintages, Alice shared the house view that impact time after disgorgement is much more important than base vintage variation. “It is interesting to monitor development post-disgorgement… comparing 6 months after, with 3, 6 and 9 years after disgorgement, you taste a much different Champagne,” she told us. 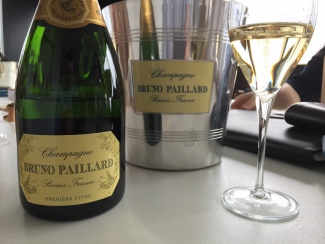 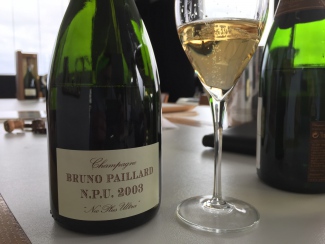 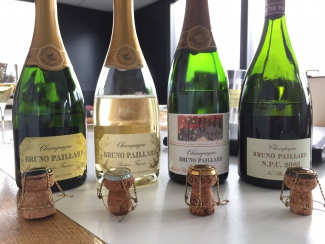 Innovation has always been at the heart of this remarkable house – whether inventing the region’s first “ground-level cellar” or pioneering the open publishing of disgorgment dates. And this legacy continues: today the house are becoming experts in farming, developing better techniques for ploughing their fields to encourage absorption of the character of the soil and produce the best expression of the terroir. A significant proportion of their vineyard management is also going organic, although Alice told us of their hesitation to use copper – a necessity for organic certification. “Copper is the enemy for soil and microbes,” she commented. Bruno Paillard’s respect for both the terroir and the environment is evident in the dedicated care they invest in their vineyards.

Overall, this was an educational visit to one of the most interesting Champagne houses in the famous region. The 2016 vintage appears to be a good, if not great year for the maison and the constant dedication to innovation will ensure this family-run business continues to develop into one of the greats. Hopefully we can return next year and taste the Vins Clairs – without a winemaker’s nose it is difficult to comment confidently on their potential from just aromatics.

Driving out of the gates and looking back on the vast grounds, we fully appreciated the scale of operations at Bruno Paillard for the first time and couldn’t help but feel inspired once again at the physical realisation of a 35-year dream. Perhaps it’s time to sell the Range Rover and start a Champagne house of our own…..