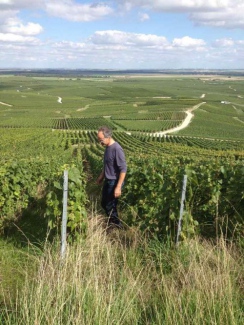 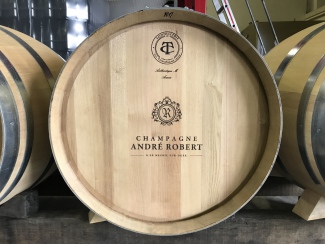 We visited Champagne in March to taste some 2017 vins clairs and learn about this complicated vintage. Whilst there, we stopped off at grower house Champagne AndrÃ© Robert, located in the legendary Grand Cru village of Le Mesnil-sur-Oger in the CÃ´te des Blancs. Here, fifthÂ generation family member Claire Robert and husband Jean-Baptiste generously shared a few vins clairs and a comprehensive range of their finished champagnes.

The Robert family have been vine growers since the 1800s but the current independent estate wasn’t founded until the 1960s, when AndrÃ© Robert established the business in the heart of the village. Today it is owned by Bertrand Robert and in 2013, his daughter Claire Robert andÂ husband Jean-Baptiste joined the business. Claire specialises in marketing, whilst Jean-Baptiste works on viticulture and winemaking.

Champagne AndrÃ© Robert boast one of the largest estates based in Le Mesnil, with 14 hectares of vineyards spread across 53 parcels. More than half of their vineyards are in Le Mesnil itself, including a parcel in the prestigious vineyard of ChÃ©tillon. The rest of their estate is comprised of vineyards in Ã‰trÃ©chy, Oger, Vertus and the Vitrayat – more than half of their land is therefore situated in Grand Cru villages. Although they harvest all three grape varieties, Chardonnay is the essence of AndrÃ© Robert, constituting 95% of their production.Â Around half of their grapes are sold to theÂ nÃ©gociants, including some bigger houses, such asÂ Billecart-Salmon.

We tasted six vins clairs with Claire and Jean-Baptiste: five from different plots in Le Mesnil-sur-Oger and one from Ã‰trÃ©chy. Given that the difficult climate in 2017 generally favoured the southern CÃ´te des Blancs villages and the Chardonnay grape in particular, it was perhaps unsurprising that AndrÃ© Robert managed to produce some of the best vins clairs in the region this year.

The base wine from the famous ChÃ©ttilon vineyard was the first to be harvested last year, with picking commencing on 1st September. “Generally the best plots are the earliest to harvest,” Jean-Baptiste said. Fresh and light with bundles of acidity, the base wines at AndrÃ© Robert hold great promise for an impressive vintage champagne to be produced from a year that will undoubtedly be quickly forgotten elsewhere.

In clear acknowledgment of their fortunate location in one of the most revered sites in Champagne, AndrÃ© Robert focus their efforts on the vineyards in Le Mesnil. “The vineyard is where the action is… which means there is less to do in the winery,” Jean-Baptiste told us. They generally don’t do malolactic fermentation and their philosophy is to give their champagnes time: 4-6 years for the non-vintages. Their top cuvÃ©es are also barrel fermented and they prefer to use mature oak barrels. “The average age is 12 years and the oldest barrels are from 1996,” Jean-Baptiste said.

We concluded our tasting with a range of finished champagnes. The non-vintage, Les Jardins du Mesnil, is a Blanc de Blancs champagne produced solely from Grand Cru plots and sold in both a Brut and Exta Brut format. Of the recent trend for decreasing dosages in Champagne, Jean-Baptsiste commented: “With less dosage, you can reinforce the natural aromas of the terroir. Reducing dosage is a good thing.”

The vintage champagne, Terre du Mesnil, is also 100% Grand Cru Le Mesnil, undergoes complete barrel fermentation without filtration or malo and is treated to a long lees ageing of 6-8 years. Of the vintages we tasted,Â Terre du Mesnil 2008Â was a particular standout, a pure and intense expression of this impressive vintage. “The charming thing is that the weaker vintages make you appreciate the stunning ones,” Jean-Baptiste added.

Our final champagne was a surprise picked straight from the cellar:Â Collection d’Auteur 1996. The Collection d’Auteur champagnes are a kind of oenothÃ¨que range, kept on the lees for much longer than the standard release and given a dosage of just 2 g/L. The 1996 we tasted had been matured in the cellars for more than 19 years and had all the richness you’d expect from a champagne with such age.

We are not currently stocking these champagnes, contact Tim Hall who imports them into the UK 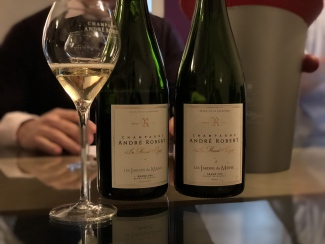 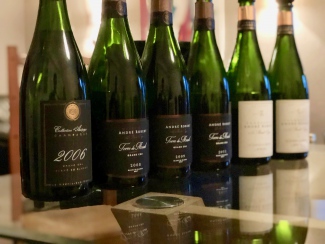