This Wednesday (11th March 2015) saw the return of the annual Champagne Bureau tasting, with a deluge of the country’s Champagne agents, merchants, brokers, retailers and lovers descending with vinous zeal on Westminster, to the historical One Great George Street. Always a special event, the largest Champagne tasting in Europe is described as “a celebration of many of the wines of Champagne that are available in the United Kingdom”; indeed, this year featured a mouth-watering 62 Champagne brands. 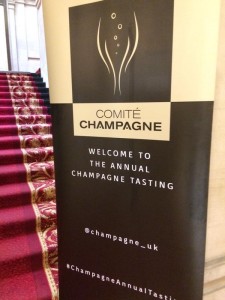 This grade II listed Edwardian building served as the perfect setting for an event of this nature: decadent, steeped in history and quintessentially European. Walking the red-carpeted stairs, we couldn’t help but gaze up at the domed-ceiling; one of the building’s four, as the buzz of the main event room enticed us nearer. This really is a stunning venue, one the Champagnes on offer would have to work hard to match in opulence.

Once the poor girl on reception had searched feverishly for our individual nametags amongst the 700-odd there (surely there’s a more efficient system for identification?), we were allowed access into the main room. With representatives from the different brands stationed around the outside circumference, and two long tables (one for Vintages and one for Non-Vintages) laid out in the centre of the room, it was a daunting task that lay ahead. 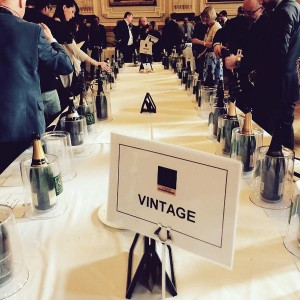 We decided to begin with the vintage table, starting with the most recent release (2009) and working backwards towards the oldest vintage (1996). An early standout was the Louis Roederer Brut 2008; light, refreshing and displaying a structured roundness, with all its elements working well together. This promising start proved accidental however, as a run of poor 2007’s followed. Probably, and hopefully, just the vintage (2007 was decidedly uninteresting), the Ayala Blanc de Blancs was the only one that left any impression. Further around the corner, things took a while to improve with the Moët 2006 surprisingly disappointing. Admittedly, we aren’t the keenest Moët fans, but the 2006 was particularly discouraging; not as much fruitiness as the 2004 vintage. Fortunately, the Laurent-Perrier 2006 soon turned things around: full-bodied and richly complex, this was the first Champagne that really left us wanting more. This is very young, with considerable aging potential – one to watch for the future. The following Champagnes proved quite mellow, with no standouts until we reached the Dom Ruinart 2004 and Pol Roger Brut 2004. Two Champagnes with which we are very familiar, both showed extremely well, the obvious stars of the Vintage table. As we moved further down, the older vintages offered nothing exciting and we were left feeling a little underwhelmed by the Vintages on show, with just a handful proving invigorating. 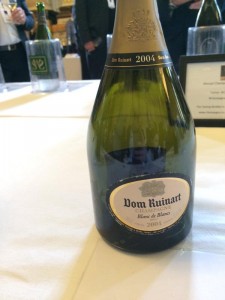 Next up: the Non-Vintages. Bracing ourselves, we began working our way along the table and an emergent theme slowly became apparent. Whilst most were quite ordinary (and only a select few actually distasteful), we noticed similar phrases being repeated in our appraisal and note jotting. “Clean”, “fresh” and “drinkable” seemed to be the words of the day. Whilst certainly not negative remarks to have about a Champagne, there was a repetitive feel to a small group of Non-Vintages; nothing wrong with them, drinkable and quite lively, but would you want another glass? What was missing time and time again was that star quality; nothing jumped out of the glass, slapped us round the face and said, “Buy me now!” Amongst this group of Non-Vintages that ‘did the job’ were Champagnes such as Taittinger Brut Réserve, Ayala Brut Majeur, Perrier-Jouët Grand Brut, Moët Imperial, Piper-Heidsieck Brut and the Veuve Clicquot Yellow Label. 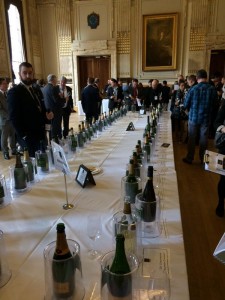 Having said that, there were a few outliers that really shone. Unfortunately, the list appears quite predictable, with the most well known names showing the best. In this elite group we included: Charles Heidsieck Brut Réserve, Laurent-Perrier Brut, Louis Roederer Brut Premier, Pol Roger Brut Réserve and Delamotte Brut (our ‘most-pleasantly-surprising’ drink of the day).

Finally, time having flown by (as always seems to be the case at these events) we were forced to hurtle our way around the outside tables. Picking only a select few to taste, highlights included: Veuve Clicquot’s La Grande Dame 2004, always a favourite and so hard to put down; Pol Roger’s newly released 2006 Rosé, a vintage that seems to keep impressing and Perrier-Jouët’s Belle Epoque 2007, most notable considering the vintage. Fortunately, the undeniable star of the day was yet to come. As a familiar face drew us towards the Taittinger stand, a glass of Comtes de Champagne 2005 was immediately proffered and boy and were we thankful! Rich, creamy, with ripe fruits and flavour in all the right places, this is a structured Champagne, it knows exactly what it wants to do and it does it well. Alongside the Dom Ruinart 2004, this was the best of the day; Comtes never disappoints and with the 2006 set for release in the Autumn, we simply cannot wait.

After ‘tasting’ as much Comtes 2005 as we could get away with, catching up with a few friendly faces and amusingly being left to serve Armand de Brignac to ourselves by a Cattier representative (seemingly unaware or apathetic to the fact we may be potential customers) we decided it was time to get back to the office and do some real work.

Overall, this was an undoubtedly impressive event. With 786 guests, 5,000 glasses used and 3,000 bottles opened, its hats off to the Champagne Bureau, and roll on the 2016 Annual Tasting.