During our vins clairs visit to Champagne in March, we made sure to stop off at some grower champagne houses to learn about the 2017 vintage from their perspective. The first grower we visited was Champagne Corbon, located in the Grand Cru village of Avize. Here, we met with fourth generation family member and current manager AgnÃ¨s Corbon, who generously showed us a few vins clairs and a comprehensive range of finished champagnes.

The history of Champagne Corbon dates back to the 1920s, when AgnÃ¨s’ great-grandfather, Charles Corbon, moved to Avize and acquired his first vines. His son, Albert, had little interest in viticulture, so the company fell quiet for much of the 1900s. It wasn’t until the 1970s, when AgnÃ¨s’ father Claude took the helm, that Champagne Corbon transformed into a producer of its own right. In 1972, fed up with buyers asking if they could pay for grapes a year late, Claude realised that he could “just bottle it and sell it himself by June”, in AgnÃ¨s’ words.

In just three decades, Claude led this single champagne estate to be one of the most respected growers in the region. Nowadays, daughter AgnÃ¨s holds the reins, although Claude still works for the company. After graduating in 1999, AgnÃ¨s moved to the UK, working in Sheffield and Crawley for a number of years. Finally realising that her life was in Champagne, she returned to France, completed a course in oenology and began working for Champagne Corbon in 2006.

The family currently own 6 hectares of land, 2ha of which are in their hometown of Avize. The rest of their vines are in the VallÃ©e de la Marne, inÂ TrÃ©lou-sur-Marne,Â VandiÃ¨res, Verneuil and Vincelles. Half of their grapes are still sold to theÂ nÃ©gociants, the other half are used to produce around 10k bottles of Champagne Corbon annually. They harvest all three grape varieties, however given their location in Avize, Chardonnay is unsurprisingly their dominant grape, accounting for 60% of their production.

“Last year was… something,” AgnÃ¨s said with a characteristic smile. Introducing the 2017 vintage, she told us it was the toughest season since she started making wine in 2006, but admitted that “one really bad vintage every 10 years is not too bad!” AgnÃ¨s has been cultivating the ground in recent years, has phased out the use of all herbicides and pesticides and none of the wines are filtered or fined. That said, she remains pragmatic about becoming fully organic. “You have to be very brave to be organic in Champagne,” she commented.

We tasted two vins clairs at Corbon. The first was from Avize Chardonnay vines planted in 1992. “Normally quite floral and light, this is instead quite citrusy this year,” AgnÃ¨s said. The second was another Chardonnay, this time from Verneuil vines planted in 1999. Badly affected by the weather in 2017, Corbon lost 40% of their vineyards in Verneuil to frost. 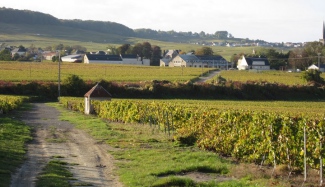 The Champagne Corbon vineyards in Avize 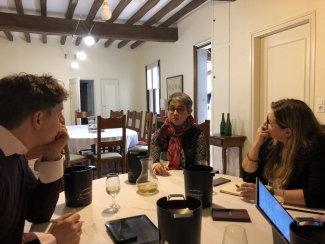 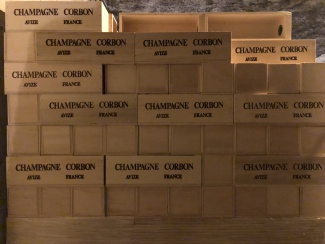 The cellar at the house can store 80,000 bottles 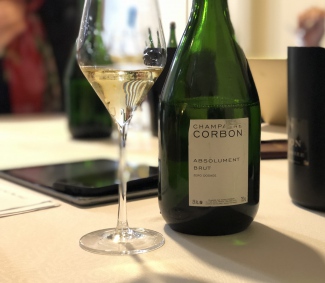 Asked for a vintage comparison, AgnÃ¨s opted for 1984. “That was the worst vintage of my lifetime… but I will show you finished 1984 and what we can still produce in a bad year,” she promised. That said, due to the surprise of 2004 – with its super-high yields, yet generously fruit-forward wines – she is cautious about judging a vintage too early. “Vintage 2017 may surprise us just yet,” she concluded.

Our tasting of the Champagne Corbon range began with Abolsument Brut NVÂ – a zero dosage blend with a proportion of wine from solera, andÂ Anthracite Brut NVÂ (a nod to the family ancestry of colliers) – the exact same wine with a 5 g/L dosage. Both quite full and round with intriguing hints of oak, these are refreshing champagnes and have impressive richness from the solera.

Next wasÂ Brut dâ€™Autrefois NV, the cream of the Corbon crop. The 95% Chardonnay content is from Avize vines planted in 1962. Half of the blend is from the most recent harvest and the other half is taken from the solera – a perpetual cuvÃ©e started in the 1980s and kept in 30hl stainless-steel tanks. We also tasted an experimental champagne –Â CuvÃ©e Perdue No2Â – which AgnÃ¨s produced for the first time in 2008 using stainless steel fermentation and then oak barrel ageing. “It wasÂ very oaky, so we never made it again,” she said.

As we tasted the finished champagnes, we noticed the more recent vintages were closed withÂ Mytik Diam technological corks, which are becoming more and more popular in Champagne as they eliminate cork taint and guarantee bottle-to-bottle consistency. AgnÃ¨s told us that Corbon switched to Mytik in 2006, making them one of the very first producers to do so. “We have had one instance of TCA [cork taint] in 11 years,” she told us.

Finally, we tasted a range of vintages of the single vineyardÂ Grand Cru Avize MillesimÃ©. As the name suggests, it is a Blanc de Blancs from 100% Avize vines and is generally made every year. It undergoes 100% barrel fermentation using 3-7 year old oak barrels and spends around 6-7 years maturing on the lees. AgnÃ¨s has been experimenting with ageing under cap or cork and agrafe for this cuvÃ©e.

The latest creation is namedÂ Les Bacchantes 2009 – “the moustache” – an ode to her father Claude’s facial hair at the time of production. As promised, AgnÃ¨s showed us vintages as far back as 1984 – the worst vintage of her lifetime. Although it had some oxidation and botrytis character, there were pleasant hints of orange, honey, marmalade and lavender. Rather than to showcase the best of Corbon, AgnÃ¨s shared this as a lesson in what can be done with difficult vintages. “It is comforting that we made this in 1984!” she added.

We are not currently stocking these champagnes, contact Tim Hall who imports them into the UK 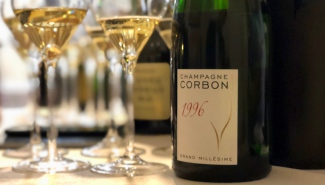 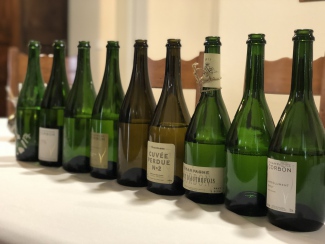