The 2018 Champagne harvest officially began yesterday (August 20th), approximately two weeks earlier than usual and the earliest since records began in 1822.Â Record-breaking weather in the winter of 2017 and spring/summer of 2018 led to rapid and vigorous vegetative growth which has produced an early crop of extremely promising quality.

Around 120,000 grape pickers will descend on the region in the coming weeks, with the earliest contingent arriving yesterday. The picking schedule will see the region’s 300+ villages picked from south to north – the first villages to be picked are those in the southern CÃ´te des Bars region, such as Buxeuil, Polisot and Polisy.

Pickers will then move onto the most southern villages of the CÃ´te des Blancs, such as Bassuet and Couvrot, before heading north to the Grand Crus of Avize, Cramant and Le Mesnil-sur Oger. The Montagne de Reims will likely be picked next, with the harvest finishing in the western villages of the VallÃ©e de la Marne.

Early indications show that the red grapes, Pinot Noir and Pinot Meunier, have generally ripened quicker and will be picked before the Chardonnay grapes in most regions. If the warm weather continues as predicted, then the harvest could be coming to a close as early as September 2nd – roughly when past vintages were just beginning.

Despite the harvest dates set by the CIVC being amongst the earliest ever, some producers decided they couldn’t wait and began even earlier.Â Champagne Beaufort Reol began picking their organic vineyard in Polisy last Friday (August 17th!). Winemaker Jacques Beaufort told AFP:Â “There were already lots of good, ripe grapes on the ground… if I’d waited another week, the harvest would have been ruined.”

The job now lies with the winemakers and vignerons, who will be closely monitoring grape health, potential alcohol content and acidity levels day by day. In a statement to producers, the CIVC reminded the vignerons not to fall foul of the past belief that acidity is the best predictor of future ageing, warning: “The level of acidity of musts does not make it possible to establish a judgement on the potential of future wines.”

Expectations for the 2018 harvest are very high, with many predicting it to be an outstanding vintage year thanks to the ideal weather conditions. Should 2018 meet expectations, it would continue the trend of very good vintages ending in ‘8’ – 2008, 1998, 1988 etc. 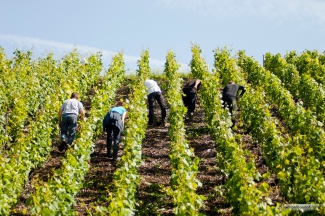 Picking officially began on August 20th, one of the earliest Champagne harvests ever