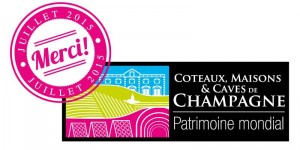 With more than 300 Champagne houses and 15,800 winegrowers operating over 33,705 hectares to produce 337 million bottles per year, we’ve always known there’s something magical about the Champagne region – and now it appears UNESCO thinks so too.

On 4th July 2015, in Bonn, Germany, the UNESCO committee officially granted the “Champagne hillsides, houses and cellars” Patrimoine Mondial (World Heritage) status. This application has been an eye-watering eight years in the making and is a momentous occasion for the region – signifying a well justified recognition not just of the vineyard cultural landscape, the birthplace of Champagne wine; but also all the work that goes into growing the grapes, producing and distributing Champagne and protecting the prestige of the Champagne appellation from misuse.

Frank Leroy, Mayor of Épernay commented: “Champagne is a unique globally-renowned product. UNESCO has now announced that Champagne boasts a living heritage: remarkable landscapes shaped by cultural and production techniques still in use today and specific to the Champagne region. This recognition is also a tribute to the people who have left their mark on our region. I’m thinking of Jean-Rémy Moët and Eugène Mercier. These visionary entrepreneurs helped build the history of a region and notably Épernay’s history.”

UNESCO said that Champagne’s World Heritage status covers “the places sparkling wine was developed using a second fermentation method in the bottle from the beginning of the 17th century until its early industrialisation in the 19th century”.

Specific mention was made of the grand Avenue de Champagne in Épernay, the heart of the industry, and of the historic vineyards of Hautvillers – where, local legend has it, the monk Dom Pérignon invented the fermentation process that gives champagne its bubbles. UNESCO concluded: “The site is an outstanding example of grape cultivation and wine production developed since the high middle ages”.

Whilst the beauty of the region is undeniable and the quality of the wine unquestionable, it should not be forgotten that Champagne is also an immense industry. Champagne pulls in an annual 4.5 billion euros, with 2.4 billion coming from exports, of which the UK is the greatest market, purchasing 32.7 million bottles in 2014. The Comité Champagne reported total stocks (including individual reserve) in Champagne to be a colossal 1,445 million bottles in July 2014.

It is this – Champagne’s huge economic value – that has led some to question UNESCO’s blessing. Whilst irrefutably impressive, are Champagne’s houses, hillsides and cellars “heritage”? And if so, do they need UNESCO’s protection in the way that endangered sites like Mali’s Timbuktu and the Rainforests of Madagascar do? After all, the luxury goods giant LVMH, owner of some of Champagne’s most profitable houses (Krug, Ruinart, Moët & Chandon and Veuve Clicquot to name a few) is worth €82 billion alone.

Well, sites in developed countries do not receive any of UNESCO’s $4 million annual funds, so Champagne stands to benefit only from the incredible esteem of the honour and any increase in tourism. Further, Champagne’s inclusion on this list of blockbusters is symbolic of UNESCO’s recent change of direction and broadening recognition. Founded in the 1970s, with the initial mission of protecting world treasure not just from the “traditional causes of decay” but also the threat of “changing social and economic conditions”, early sites like the Taj Mahal or the Palace of Versailles were incontestable. However, the definition of “heritage” has somewhat shifted with modern times and UNESCO is now preserving not just buildings, but also symbols of

important human endeavours – like the invention of sparkling wine.

And whilst World Heritage listing will no doubt help promote the drink and boost tourism (travel agents are already including Champagne in their programmes), let’s not forget the influx of tourism can be equally as harmful as it is economically expedient, with sites like Italy’s Venice and Japan’s Kumano Kodo often cited as being victim of too many visitors.

Whether you consider Champagne to be “heritage” or not, there’s no denying its natural beauty, its representation of sublime human achievement and its status as a symbol of the art of living and celebration.

We’ll leave it to Pierre-Emmanuel Taittinger, president of Taittinger Champagne and vice-president of the Association Paysages du Champagne, to sum up what this means for Champagne: “The UNESCO inscription is recognition for the work of our ancestors, their know-how, our history, wine growing, production and selling in the region for over 1,000 years, the beauty of our landscapes and of course for the people who prepared and put together this application over the last few years! It’s a message of hope for the work to be done in the future. We will continue the efforts to showcase and enhance our landscapes and sites in order to be worthy of this inscription.”

You can read more about Champagne’s UNESCO World Heritage listing here and watch a video of the decision below. 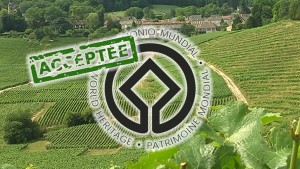