Heidsieck was a popular surname in 19th century France, but there’s no competition between Piper and Charles. Owned and managed by the same luxury firm, like all good siblings they also share a room, both situated within the same grounds in Reims. Standing within the grand reception room of the elaborate golden Piper-Heidsieck HQ building, we were greeted by Dominique, International Brand Ambassador for both Piper and Charles. From here ourÂ experience began, as Dominique led us over to the Charles Heidsieck winery towards the rear of the complex, where our tasting of the Vins Clairs was to take place. And what a complex it is – vast grounds house multiple modern, yet nondescript buildings thatÂ leave one equallyÂ impressed and intrigued.

We visited on Friday morning with Essi Avellan MW and were surprised by how deserted the place appeared to be. “Not many employees work on Friday in Champagne,” explained Dominique. “They prefer to start earlier on the weekdays instead.” We couldn’t help but wonder if we were perhaps in the wrong section of the industry…. 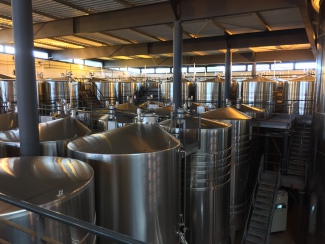 After a brief introduction of the factories where disgorgement, dosage and labellingÂ take place, Dominique opened the doors to the winery itself. An imposing building containing close to 100 stainless-steel tanks varying in size, all connected and accessible by a clever labyrinth of suspended walkways, the scale of operation here is quite grand. Laboratory-clean, each tank glistened with pride, and we were told the centre-piece – two huge stainless-steel blending tanks – hold enough wine to fill half a million bottles of Champagne each.

The two centre-tanks hold anÂ astonishing 500,000 bottles of Champagne each

Having sufficiently whet our appetites, Dominique led us to the tasting room whereÂ we were to sample the 2016 base wines. Chef de Cave Cyril Brun was unfortunately away in Japan, but we were left in the capable hands of his number 2, assistant winemaker StÃ©phane Lipreau. StÃ©phane began with the customary overview of the 2016 season. Highlighting the difficulties in the summer, he commented: “July was scary… lots of downy mildew. But we couldn’t believe our luck when the weather dried upÂ forÂ September.” Describing the harvest as “perfect”, StÃ©phane reflected what we’d been hearing all week – ideal weather in September was a huge relief for winemakers all over the region.

Whilst Charles Heidsieck were unlucky with some of their smaller vineyards, StÃ©phane praised the quality of the Chardonnay grapes from Grand Cru sites. “Pinot Noir was good in most places, but Chardonnay from the Grand Crus was fantastic.”

For our 2016 base wine tasting, StÃ©phane presentedÂ two Chardonnay’s, two Pinot Meunier’s and two Pinot Noir’s from a range of villages across Champagne. 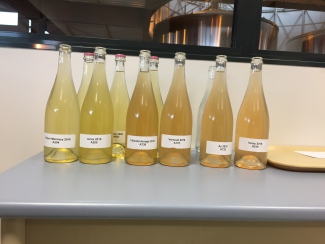 Villers-MarmeryÂ Montagne de Reims
Unusual vineyard as Chardonnay is not normally grown in theÂ north ofÂ Montagne de Reims. This has great fresh apple notes andÂ hints of peach. Good structure with a hint ofÂ bitter and a tangerine edge. Fruit intensity gives impression the acidity is lower than it probably is! 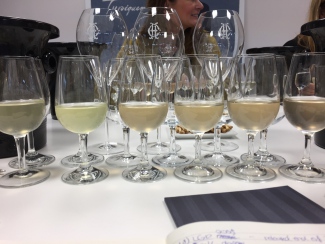 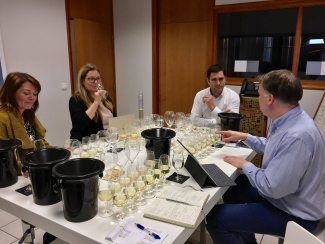 After we had tasted the 2016 Vins Clairs, StÃ©phane informed us of our next experience – we were to sample Charles Heidsieck reserve wines from the same village across a variety of vintages. He had prepared Chardonnay reserve wine from three vintages ofÂ the northern Montage de Reims village, Verzy and Pinot Noir reserve wines from three vintages of theÂ southern CÃ´te des Blancs village, Cramant. This included Cramant from the exquisite 1996 vintage, the oldest reserve wine Charles Heidsieck currently stock and the oldest we tasted on our Vins Clairs 2016 trip. 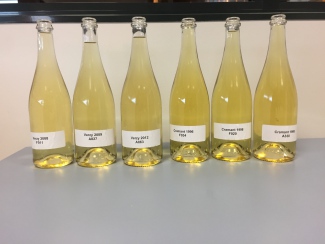 Verzy 2012Â Montagne de Reims
Slightly tighter than others. Lots of apricots and good acidity. Quite delicate but drinkable. 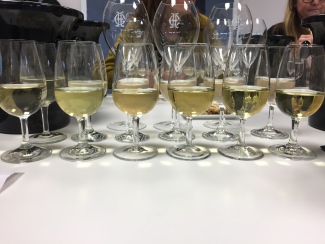 Reserve wines:Â left three are from Verzy and right three from Cramant

Cramant 1996Â CÃ´te des Blancs
Loads of flavour here,Â this isÂ still a powerhouse! The acidity is holding up beautifully, this is justÂ delicious. CouldÂ drink and drink.

After tasting both the 2016 base wines and reserve wines from six different vintages, Essi was again inspired into assemblage! For their annual Brut RÃ©serve NV, Charles Heidsieck use 60% current vintage wines and 40% reserve wines (the maximum allowable amount). In a light-hearted challenge toÂ good friend and cellar masterÂ Cyril Brun, Essi was professionally precise andÂ gathered the appropriate measuring instruments to set about creating a 200ml blend – using 120ml (60%) of the available 2016 wines and 80ml (40%) of the available reserve wines. 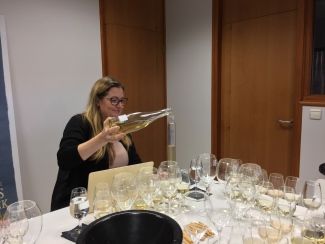 2016 Base Wines
For the 2016 base mixture, Essi decided to evenly divide the grape varieties. Using varying amounts of all of the 2016 vins clairs we tasted, she started with a third each (40ml) of Pinot Noir, Pinot Meunier and Chardonnay: 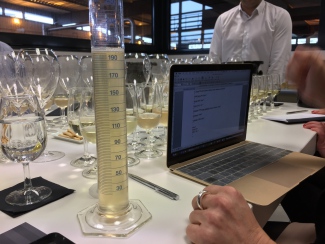 After a quick tasting and collaboration with StÃ©phane, Essi decided the blend needed more character, adding a further 10ml of the incredibly complex Cramant 1998 reserve wine and 10ml of the expressive AÃ¿ from the current 2016 vintage. We have to say that for 10 minutes work, her blend was perfectly balanced and structured. She might not be making Cyril redundant anytime soon, but her expert knowledge of the region and villages was evident in her precision. Modest as ever, Essi commented only: “You can’t really get it wrong with wines of this standard.” 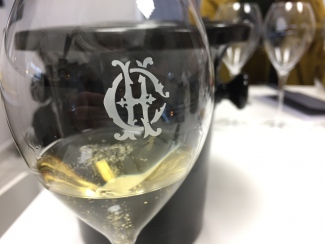 StÃ©phane then guided us through a tasting of the current Charles Heidsieck Champagne range. Starting withÂ Charles Heidsieck Brut RÃ©serve NVÂ (with 2008 as a base vintage) –Â a champagne we are very familiar with but never tire of tasting – itÂ seems the 2008 vintage can do wrong: this was simply stunning!Â Containing wine from over 60 crus, a huge percentage of Charles Heidsieck sales come from this Champagne. A big nose of toasty aromas and great roundness on the palate –Â much power is contributed by the high percentage of reserve wines. After tasting the Cramant reserve wines, it’s much easier to add content to the blend – we started to see real evidence of the reserve wines at work. 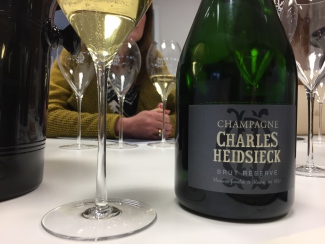 Next up was a Champagne we have a great relationship with:Â Charles Heidsieck RosÃ© MillÃ©simÃ© 2006. This placed second in our blind tasting of fourteen prestige RosÃ© Champagnes (read here); a considerable achievement amongst some formidable competition. Giving us some background on the 2006 vintage, StÃ©phane commented that it was a great year for Pinot Noir, which experienced unusually early ripeness. With just 8% red wines (from Hautvillers and Verzenay) added, the impressive red berry flavours are a delightfulÂ surprise. Given time to develop, delicious spiciness and ginger notes start to shine through. This was as expressive as we’ve come to expect as standard – one of our favourite RosÃ© Champagnes for a reason. 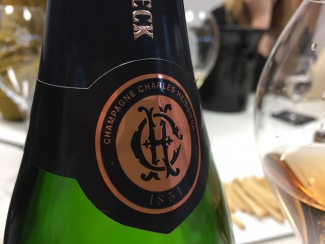 The last Champagne we tasted wasÂ Charles Heidsieck Blanc des MillÃ©naires 1995. Now over 22 years old, this is still the current vintage of the Blanc des MillÃ©naires cuvÃ©e. Pure Chardonnay, this contains wine from just 5 Grand Cru vineyards in the CÃ´te des Blancs, including: Avize, Cramant, Oger and Vertus. This had all the characteristic creaminess and power of the 1995 vintage – loads of lemon and lime flavours burst out on the palate. Incredible length and that wonderful acidity is still present. StÃ©phane also shared his preferred accompaniment – barbecued sea bass… life in Reims is clearly not all hard work! 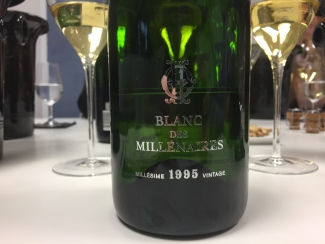 Overall, our vist to Charles Heidsieck was tremendously insightful. The base wines here had an incredible richness and Charles seem to have had great success with the Chardonnay in particular. Before leaving, we did askÂ StÃ©phane what the future holds for the House. Keeping Charles’ cards very close to his chest, he could only reveal that the next Blanc des MillÃ©naires vintage has been decided upon, butÂ couldn’t tell us which as: “only Cyril knows!” 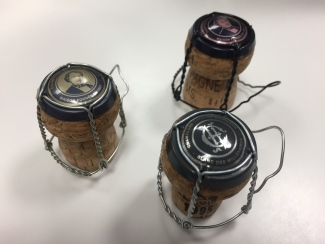 What a trio from ‘Champagne Charlie’!

Exiting along the grandÂ suspended walkway, it was difficult to convince ourselves to keep walking. Sharing with us Charles’ development plans for the future, Dominique explained how the House will be growing vines on the lawn outside the winery to help tell the growth and development story of Chardonnay, Pinot Noir and Pinot Meunier grapes. Innovation like this coupled with Cyril Brun’s experience at the helm,Â Charles Heidsieck are heading in an exciting direction. ‘Till next time! 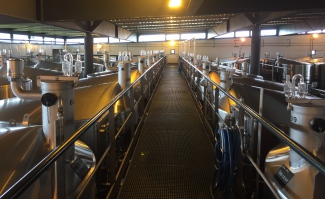 A grand exit from a Champagne House with greatÂ character. We’ll be back…