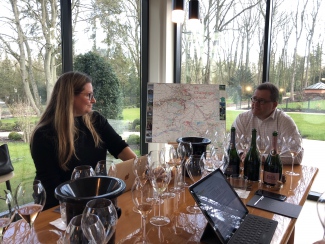 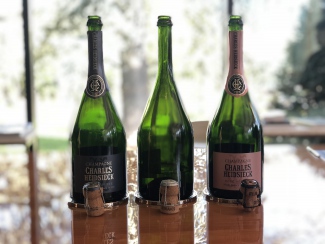 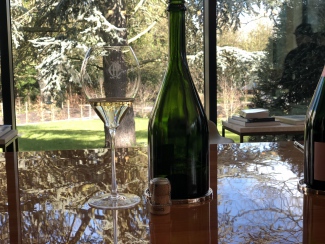 When we visited Charles Heidsieck in Reims earlier this month, the ever charming Cyril Brun – Chef de Cave since 2015 – was unfortunately recuperating from a cold. However, upbeat as always,Â he shared with us his recipe for recovery. “I am using local medicine,” he said withÂ characteristic humour and a twinkle in his eye. Happy to add ‘medicinal’ to our list of Champagne Benefits, we volunteered ourselves for a taste of this provincial remedy. With the help of Executive Director Stephen Leroux and International Brand Ambassador Sophie Kutten, Brun introduced a new member of the Charles Heidsieck non-vintage family, the latest vintage champagnes, a new prestige cuvÃ©e and a resurrected relic from the past.

The RosÃ© NV has seen a big jump in base vintage recently, transitioning from 2008 to 2012. The 80% base vintage content is equally divided between the three grape varieties, whilst the 20% reserve wine content is composed of 50% Pinot Noir and 50% Chardonnay. The 5% red wine from Les Riceys bring the tannins and red fruit aroma that lend it a delightful fleshy character.

As we tasted, Cyril told us of his recent dosage experiments. Charles are exploring the idea of reducing the concentration of sugar in their dosage liqueur and increasing the volume added. Dosage liqueur generally contains around 600 g/L of sugar. By reducing this to nearer 300 g/L and adding older reserve wines, Brun hopes to bring more texture to the finished product. “It will not make magic, but detail + detail counts,” he acknowledged.

Next, we were shown the newest member of the Charles Hedisieck non-vintage range. Officially launched last weekend and available in May 2018, this brand new Blanc de Blancs cuvÃ©e is a tribute to the Chardonnay focus of the house initiated in 1947. It is composed of wine from around ten different villages, including Charles Heidsieck favourites Montgueux, Oger, TrÃ©pail, Vertus and Villers-Marmery.

Very different to the richly mature Blanc des MillÃ©naires,Â Blanc de Blancs NV is all about freshness of youth, more a Chardonnay expression of theÂ Brut RÃ©serve NV, than a mini-Blanc des MillÃ©naires. Based on the 2012 harvest and with 20% reserve wine, the production volume of this first release is tiny and will be initially targeted towards the on-trade.

We completed our non-vintage trilogy tasting with the currently releasedÂ Brut RÃ©serve NV, which is based on 2010. Although a difficult year, Brun remarked on the lack of pollution from the 2010 harvest. The seamless transition from different base vintages without a change in quality is what he describes as “the beauty of non-vintage champagne.”

Later this year,Â Brut RÃ©serve NVÂ will move to the 2012 base vintage, the first time in history when all Charles Heidsieck NV’s on the market will have the same base year. The average age of the reserve wines – a high 40% of the blend – is ten years, adding finesse and aromatic amplitude to what is one of the best non-vintage champagnes available.

As we tasted the two new Charles Heidsieck vintages, Brun talked us through the house policy on corks and their recent switch to technological corks. “In 2017, we were 70% synthetic [technological] and 30% natural, which is going up 10% each year”, he said. In a few years, they will be using technological corks – which guarantee zero-TCA and ensure bottle-to-bottle homogeneity – on every bottle of champagne. Brun is so confident of their prowess, he believes that in ten years’ time, no-one will pay any attention to cork. “The act of sniffing wine as a sommelier will disappear,” he added.

Moving onto the vintages, Leroux spoke of the decision to release RosÃ© MillÃ©sime non-consecutively – RosÃ© 2006Â first, now followed by RosÃ© 2005. “We [Thierry Roset and Stephen Leroux] made the rosÃ© decision in seconds, but it wasn’t the same with the blanc,” he said. The vintage variation wasn’t as obvious as with the rosÃ©s and although initially very youthful and fresh,Â Brut MillÃ©sime 2006Â is now already quite rich and condense, characteristics you’d expect from a much older champagne. Given the chance again it is likely they would have also reversed the order of release for the blanc but, as Leroux noted, “you cannot repeat history”.

RosÃ© MillÃ©sime 2005Â on the other hand is just beginning its life cycle. In 2005, they harvested quite late with a lot of phenolics, which will slow the maturation. Brun commented that RosÃ© 2005 is changing daily: just 48 hours before our visit it was very angular and bold, yet now it was sightly rounding and softer. With 8% red wine, half sourced from Les Riceys and half from the Montagne de Reims, this is a tremendous vintage rosÃ© that is likely to challenge its highly acclaimed predecessor.

The newÂ Blanc des MillÃ©naires 2004Â was officially launched in January 2018, so this was a good opportunity to see how it has evolved since then. Brun explained that the new vintage needed lots of time post-disgorgement. “When originally disgorged back in November 2016, it carried too much of the 2004 vintage and did not taste like a BdM,” he told us. By November 2017, after one year post-disgorgement, it steadily began to open up. Now, six months later, it has so much creaminess, purity and complexity.

As we tasted the previous vintage,Â Blanc des MillÃ©naires 1995, it emerged that Brun had decided – unbeknownst to us – to test another one of his experiments. After a few moments of tasting, Essi Avellan asked Brun if this bottle had a lower dosage than others, citing less acidity and lots more freshness than she has become accustomed to expect from this champagne – which is now over 20 years old. Smiling (no doubt at Essi’s talent for distinction), Brun informed us that the latest batch had in fact been jetted after disgorgement. Apparently, the resulting champagne is often likened to that of a lower dosage, however is simply just the effect of completely removing oxygen, which may – without jetting – vary between bottles.

The difference was genuinely astounding. A champagne that is now just starting to show its age has been completely transformed, given a new lease of life and an extended drinking window of 4-5 years. The finish isn’t any drier and the lack of oxygen gives a broader and rounder experience. Â “Winemaking is not just poetry, sometimes there is some technique,” Brun added. 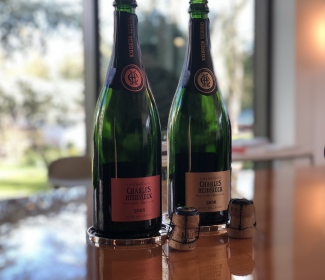 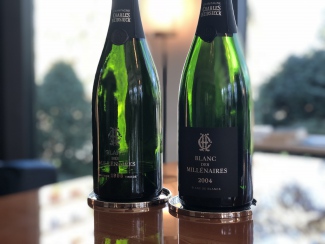 New label as the letters on BdM 1995 kept falling off! 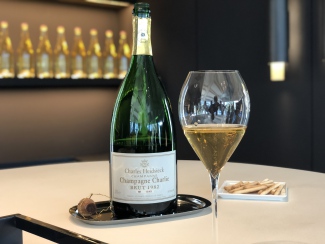 To conclude our tasting, Brun opened a magnum ofÂ Champagne Charlie 1982Â – one of the champagnes re-released last year as part of the excitingÂ Collection CrayÃ¨res. The exact blend is unknown – head winemaker at the time Daniel Thibault was not precise about his recipes – but is likely around 50% Chardonnay, 50% Pinot Noir. The dosage was similarly not recorded, but we were told is probably around 12 or 13+ g/L. Interestingly, this bottle was kept on the lees for nearly two decades and disgorged in 1999, making Charles Heidsieck the first house to disgorge old wines late – a now common trend amongst champagne producers, such as Dom PÃ©rignon OenothÃ¨que.

Unfortunately there were only five vintages of Champagne Charlie – 1979, 1981, 1982, 1983 and 1985 – before the cuvÃ©e was discontinued as Charles Heidsieck was bought by the RÃ©my-Cointreu group and relegated to live under the shadow of Krug for a decade or more. Fortunately, a few hundred magnums still exist. Almost unbelievably fresh and youthful, Champagne Charlie 1982Â tastes like a champagne twenty years its junior – a testament to the slow-maturation magnificence of magnums. Impossible to spit and unbearable to stop pouring, a sentiment summed up succinctly by Brun: “A good bottle is an empty bottle.” 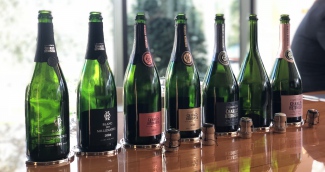 What a line-up! The non-vintage range, new vintage champagnes and the prestige cuvÃ©e Blanc des MillÃ©naires