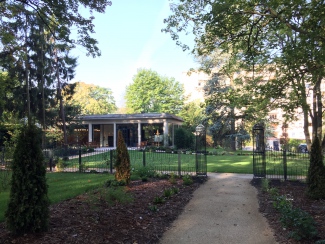 The picture on the right should visually convey that which is much more difficult to communicate in words: Charles Heidsieck’s newly renovated Pavillon des CrayÃ¨res is stunning. We visited with Jancis Robinson MW early on August bank holiday Monday. With the forecast predicting 30Â°C highs for the day, the mid-morning sun had already encased the newly planted garden in a shimmering golden hue. Cyril Brun, current Cellar Master who joined Charles in 2015, greeted us warmly outside the ultra-modern tasting room. 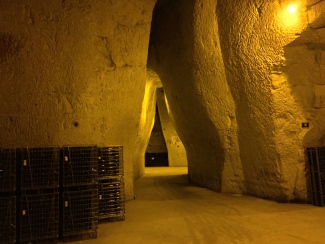 New bottle design in the chalk of the crayÃ¨res

Situated directly above their extensive labyrinth of two-thousand-year-old Gallo-Roman crayÃ¨res, Cyril noted our admiration of the site and offered a quick tour of the cellars. Exploring thirty metres beneath the surface of Reims is always a mesmerising experience but Charles Heidsieck’s vaults are particularly impressive. Featuring forty-seven separate crayÃ¨res (chalk pits, or cellars, built into the natural quarry), Charles purchased these ancient hideaways shortly after their establishment in the 1850s: a wise investment that now houses 90% of Charles Heidsieck’s inventory and even led to a new bottle design in 2013 thatÂ reflects the history of the crayÃ¨res (pictured left).

Cyril began our tasting with a brief insight into the 2017 season. Whilst nervous of some botrytis – found mainly in the Aube region –Â and the effects of heavy rain the previous week, he remained cheerfully optimistic of a good quality harvest, which the House planned to begin on Thursday 30th August. Largely reliant on their suppliers – Charles Heidsieck’s vineyards fulfil just 10% of their requirements; a consequence of the decision to purchase the crayÃ¨res rather than vineyards back in the 1850s – the harvest is more of a spectator sport than a time of manual labour for Charles. 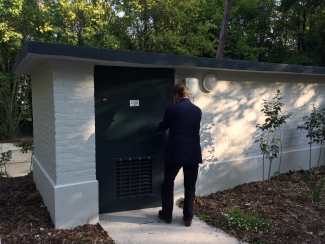 First on our tasting agenda was a comparison of RosÃ© NV and Brut RÃ©serve NV with different base harvests. Commenting on rosÃ© champagne as a whole, Cyril noted that Charles have seen a boom in the last 5-6 years, with exports rising from ~7% to ~10% – an increase that is now tapering off. We compared two RosÃ© NV blends with 2012 and 2008 as a base vintage. The 2008 base vintage blend has been on the market since early-2015 and is still currently sold. There was no bottling between 2008 and 2012, so the 2012 base will be the next on the market. 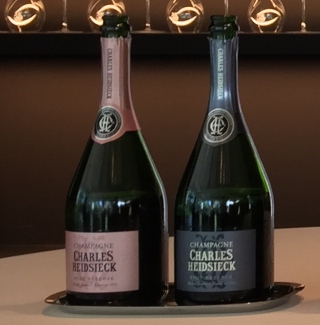 Notably, Charles include 20% reserve wine in their RosÃ© NV blend and 40% in their Brut RÃ©serve NV, in an attempt to create a different stylistic expression: “We want to have a distance between our rosÃ© and our blanc,” Cyril told us. The goal for the rosÃ© is to have a fruit-forward character, so the reserve wine content is lower and younger – with an average age of 5 years compared to 10 years for the blanc.

Commenting on dosage, Cyril said: “I considered reducing the dosage when I joined the House two years ago. But after organising a triangular blind tasting to compare different residual sugar contents, I realised the current dosage is right, so I took the point. When it works, it works.” Indeed, although their current policy – 11 g/l for the non-vintages and 10 g/l for the vintages – is higher than other producers, the finish is always bone-dry and seems just right. “We have other variables to work on first,” Cyril added with a smile.

Cyril shared with us one of his long-term projects at Charles: reversing the trend for the base vintage to be younger in larger bottle formats. Currently, the base vintages found in the different Brut RÃ©serve NV formats is: 37.5cl = 2007, 75cl = 2008, 1.5L = 2010 and 3L = 2012. “This is the opposite of what we want,” he chuckled. “We will reverse this in the coming years.” Charles will switch from the 2008 base vintage blend – currently sold on the market – to the 2010 base vintage blend, at the end of the year. 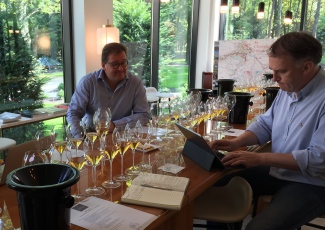 At around 45,000 bottles per year, vintage champagne constitutes just 5% of Charles Heidsieck’s total global production. Whilst tasting the current range, Cyril spoke of the decision to release Brut MillÃ©sime consecutively (vintage 2005 before 2006), yet release RosÃ© MillÃ©sime non-consecutively (vintage 2006 before 2005): “If it could be done again, 2006 [Brut MillÃ©sime] may have come before 2005… but it had never been done before… perhaps my predecessor didn’t want to be the first!”

Cyril’s decision to release RosÃ© MillÃ©sime 2006 before 2005 was one of the first of his tenure as Chef de Caves, setting the tone for a decisive leadership. “The 2005 rosÃ© had a lot of phenolic character… it just wasn’t ready, so we held it back,” he added. Comparing it in style to RosÃ© MillÃ©sime 1999, he believes phenolics provide the backbone for great ageing and is certain RosÃ© 2005 has a long life ahead. Still quite tightly wound, Cyril plans to release RosÃ© 2005 late next year. Brut MillÃ©sime 2006 can be expected to hit the market sometime next month. 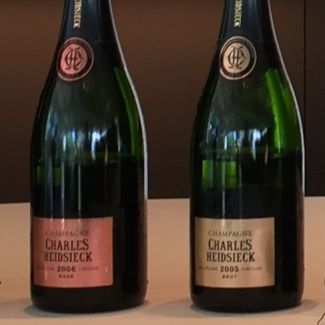 Charles Heidsieck Brut MillÃ©sime 2005
60% PN, 40% CH | Ageing: 10 years on the lees | Disgorged: Spring 2016 | Dosage: 10 g/l
Big mouth-feel and loads of fruit with lots of phenolicÂ character. This really started to open up a year ago and is gettingÂ more expressive with age.

Next came a full vertical tasting of all four Blanc des MillÃ©naires vintages, dating back to the first release: BdM 1983. Responding to Jancis’ inquiry into the “seemingly never-ending” 1995 vintage, Cyril told us that then Cellar Master Daniel Thibault had “fallen in love” with 1995 and produced more than ten times what was necessary. Shortly after, the House decided to hold back sales, resulting in a lifespan of more than a decade for the 1995 release –Â it was first launched in 2006!Â Fortunately, Thibault fell in love for good reason: the 1995 still tastes youthful and fresh and gets better with every annual disgorgement.

With just four vintages since the launch 25 years ago, Blanc des MillÃ©naires is one of the rarest cuvÃ©es produced. Cyril informed us that although 1983 was the first vintage, Blanc de Blancs 1981 and 1982 effectively worked as tests for Blanc des MillÃ©naires. The “easiest champagne to make on paper”, the blend is always an equal 20% contribution from each of the five top Chardonnay Grand Crus: Avize, Cramant, Le Mesnil-sur-Oger, Oger and Vertus. 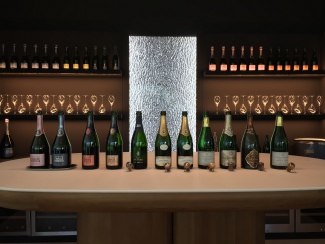 Charles Heidsieck Blanc des MillÃ©naires 1985
100% CH | Ageing: 8 years on the lees | Disgorged: 1994 | Dosage: 10 g/lÂ | Jancis Score: 18.5/20
Mushroom was the signature of the year. This has such freshness and zing. A real toasty character with citrus and orange peel notes. Lovely earthyÂ personality. 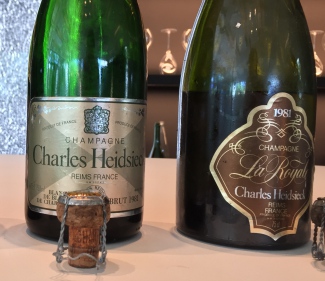 Saving the best for last, Cyril ended the tasting with a showcase of his most exciting new project: the ultra-exclusive Collection CrayÃ¨res. After tasting Charles Heidsieck’s entire inventory upon joining the House (“some days are nicer than others!”), it was decided that they had enough volume available to sell some of the older vintages. However, the entire collection is still measured in the hundreds rather than the thousands. Whilst all of the vintages have not yet been revealed, the oldest dates back to 1966 and the collection includes examples from the 70s, 80s and 90s. Whilst priority will be given to the original disgorgements, in the cases where they have some still ageing on the lees, a limited number will be newly disgorged and packaged for release.

The vintages we tasted all showed incredibly well – perfect examples of how vintage champagne can develop new levels of complexity under ideal storage conditions. Most surprising was the Brut MillÃ©sime 1983: “the most underrated vintage of the 80s” according to Cyril, a phenomenon he attributes to the preceding year. Explaining that 1982 was the year in which America really discovered Champagne, Cyril believes the success of this exhibition vintage largely over-shadowed the “clean, pure and subtle” champagnes that followed in 1983. Consequently, there is more stock of this fantastic vintage available across the region than you might expect. 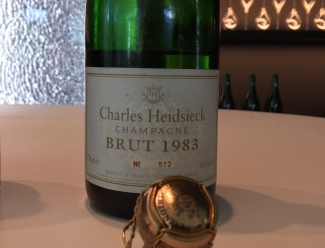 Later this year, limited numbers of the Collection CrayÃ¨res will be released onto the market. Confirmed thus far are: Charlie 1985, RosÃ© MillÃ©sime 1985, Brut MillÃ©sime 1983, Charlie 1982 (in magnum) and Royale 1981. However, the bulk of the collection (around 25-28 cuvÃ©es) will be offered at a Christie’s auction in London on Thursday 30th November. “The objective is to reveal some of the treasures that Charles Heidsieck have in their cellars,” Cyril said.

Frequently referred to as the “World’s Most Underrated Champagne” by those in the industry, the tide is changing for Charles Heidsieck. After suffering under the shadow of Krug during the RÃ©my-Cointreau ownership days of the 80s and 90s, Charles Heidsieck have been steadily growing since Krug was sold to LVMH in 1999. Now under control of family-owned luxury goods company EPI, Charles has the space it needs to flourish. And with charming revolutionary Cyril Brun at the helm, the House is sure to go from strength to strength.