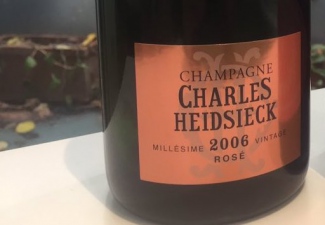 The first Rosé Millésime vintage of the millennium

Released 18 months ago now, Charles Heidsieck Rosé Millésimé 2006 is the first Charles Heidsieck Rosé of the millennium – the last release being the 1999 vintage. Explaining the general Charles Heidsieck vintage gap (the Brut Millésime 2005 was the first release since 2000), Executive Director  of Charles Heidsieck, Stephen Leroux commented: “2001 was an annus horribilis and 2003 was a heatwave year with a very unbalanced harvest and very low acid.” As for the unusual decision to skip the highly acclaimed 2002 and 2004 Champagne vintages, Leroux said: “in 2002 we decided to fill up our tanks of non vintage, which is our bread and butter” and, hinting at a special upcoming release, offered only a teasing: “we did something different” for the 2004 vintage.

The 2006 vintage was a good year all round for many vineyards in Champagne, very unusual sunny weather in the early summer months of June and July meant great early flowering. However, moving into August the weather turned for the worse and plenty of showers and humid weather threatened some mildew. With September’s arrival came sunny days and cool nights, ideal conditions for the grapes. The appellation brought in its maximum allowed yields of 13,000 kilos per hectare.

The competition included a medley of the market’s most highly regarded Rosé Champagnes, such as Laurent-Perrier Alexandra Rosé 2004, Dom Ruinart Rosé 2002, Krug Rosé NV and both Dom Pérignon’s recently released Rosé 2005 and the legendary Rosé P2 1996. Rosé Millésime 2006’s performance is really put into perspective when you consider the Champagnes mentioned above all have price tags of over £200.

Interestingly, three of the panel on the day correctly identified it during the blind tasting – the knowledge of it being Charles Heidseick clearly not negatively impacting it’s high score. Rated 19/20 by The Finest Bubble, it just blew us away with that richness of fruit and cake-like character. Whilst we are not suggesting that £95 a bottle is cheap, Rosé Millésime 2006 does offer comparative affordability considering its high performance against ultra-prestige competition. You can read more on the Rosé Champagne tasting in our write-up here.

The finish is generous, yet subtly restrained, supported by fresh chalky minerality.” 95/100

Nick Baker, The Finest Bubble – “Has strong red amber colour with huge richness of fruit immediately apparent, big nose of peaches and hints of fig. When you taste you get even more complexity, like dried fruits you get a great fruitcake, just delicious! Great length, this one’s a stunner with plenty of acidity giving it ageing potential.” 19/20

Essi Avellan MW  – “Charles Heidsieck have decided to launch the Vintage Rosé 2006 before the 2005, which to them still needs time. Opulent raspberry, fresh peach and caramel nose with stylish spicy complexity but only emerging toastiness. The palate is highly youthful, plump, almost oily in its richness. The finish is tight with pencil shavings notes and slight phenolic feel to it. The dosage has been decreased to well-balanced 9g/l. A generous year suiting perfectly to Charles’ style but should be given time to develop its toasty and coffee complexity typical for Charles Heidsieck.” 93/100

Roger Voss, WineEnthusiast.com – “This is a pale-colored wine with a finely wrought texture and great fruit. It is tight and mineral on the one hand, but balanced with the crispest red-currant flavors that offer a bright line in acidity. Delicious hints of age round out the final fresh aftertaste.” 93/100 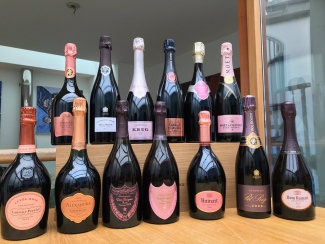