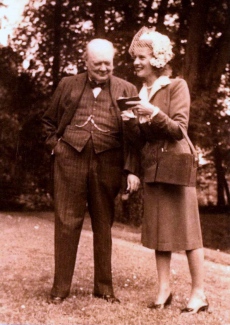 Sir Winston Churchill’s love of Champagne sprang from his youth. In ‘My Early life’ he recounts the story of how Colonel Brabazon, the redoubtable CO of the Malakand Field Force, would complain that the Champagne in the Mess had clearly been sourced from the local chemist, and one senses that Churchill was fast acquiring a similar discernment. “Mr. Churchill’s tastes are simple”, it was later to be said: “he is easily satisfied with the best”.

Churchill further recounts that on the eve of Omdurman (1898) he was thrown a precious bottle of Champagne (by a junior lieutenant called Beatty, later the hero of Jutland) from a gunboat on the Nile, rescuing it from the shallows. We do not know if the bottle was Pol Roger, but we do know that it was about this time that his tastes began to crystallise. Wine merchants’ bills in the Churchill Archives Centre in Cambridge from the first decades of the last century show us that he was buying healthy quantities of the great vintages of the 1890s, and thereafter the 1904, 1906 and 1911. His chosen wine merchant at that time was Randolph Payne of 61 St. James’s Street, now the headquarters of Justerini and Brooks (where one may still find Pol Roger).

If, as we now know, Sir Winston was a customer for Pol Roger well before the Second World War, it was in the aftermath of the Allied Victory that his loyalty was sealed: and that happened, quite simply, when he met Odette Pol-Roger.

This first meeting was the beginning of a long and affectionate friendship. ‘It was’, says Susan Mary Alsop, ‘a beautiful December-May relationship, quite harmless and smiled uponbyMrs.Churchill,whomuchadmiredOdette’. Itwastoblossomwithsucceeding generations and endures strongly to this day between the Churchill and Pol-Roger families. 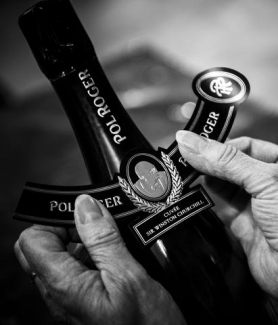 It is not in the least surprising that Churchill was captivated by Odette. She was not only one of the beauties of her generation – one of the three dazzling daughters of the French General Wallace known as ‘The Wallace Collection’ – but she had a style and wit that sparkled as vividly as her champagne.

Following in a strong Pol Roger tradition from the First World War, when Maurice Pol- Roger was Maire of Epernay and came close to being shot, Odette made no secret during the Occupation of the Second as to where her loyalties lay. Her garden was always ostentatiously full of English flowers, and she sported a brooch she had been given with the wings of the R.A.F. Rather more discreetly, she was a courier for the Resistance.

It must have been this spirit of defiance, no less than her beauty, which struck such a chord with Sir Winston. It is said that for him she personified France, a subject on which he can only be described as a romantic.

From that first meeting, when the two were introduced by Duff and Diana Cooper, Churchill was to demand no other champagne, and his wine merchants in London or Pol Roger in Epernay were often to know sooner than Downing Street where Churchill was to be. Pol Roger on ice was to greet him on the Côte d’Azur, in Washington or Marrakech. In 1952 when he received the Freedom of Strasbourg, the Press reported that he had insisted on Pol Roger 1928. 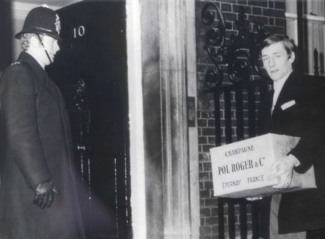 The friendship between Churchill and Odette Pol-Roger can be followed through their correspondence in the Forties and Fifties. She was invariably invited to the Embassy in Paris whenever Winston was in France, and when he named one of his racehorses ‘Pol Roger’ in her honour she came to Brighton races to watch it run.

The filly ‘Pol Roger’ was never as good as the great ‘Colonist II’, but she had a fine sense of timing and won the Black Prince stakes at Kempton Park in the Coronation Meeting of 1953. 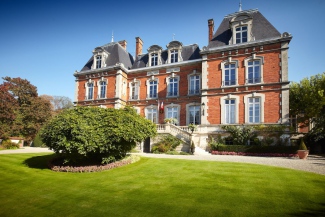 It was to Sir Winston’s regret that he never came to what he described as ‘the world’s most drinkable address’, the Pol-Roger family house at 44 Avenue de Champagne, Epernay, and never carried out his threat to ‘tread the vintage with his bare feet’. Perhaps the Pol Roger cuvée would have changed forever if he had! But he did send a set of his memoirs inscribed ‘Cuvée de Réserve, Mise en Bouteille à Château Chartwell’ which received pride of place in Odette’s library.

When Sir Winston died in 1965, on Odette’s instructions all Pol Roger labels destined for the United Kingdom were bordered in black in tribute to Sir Winston’s loyalty and friendship. Only after 25 years was the band lightened to dark blue, recalling his distinguished days at the Admiralty.

Nowadays there is an even more fitting tribute in the shape of the ‘Cuvée Sir Winston Churchill. Created in homage to Pol Roger’s most illustrious devotee, the Cuvée is appropriately composed of only the best grapes, from only the best vineyard sites to which Pol Roger have access and from only the finest vintage years declared by the House. As Sir Winston himself once declared: ‘My tastes are simple. I am easily satisfied with the best!’

The precise formula is a family secret, but invariably true to the style that Sir Winston himself preferred: robust, full-flavoured and mature (the Sir Winston Churchill Cuvée is always released later than other Pol Roger vintage champagnes).

The first Cuvée made in his honour, and sold only in magnum, was from the 1975 vintage, 10 years after his death. It was launched at Blenheim Palace, Churchill’s place of birth, in 1984.