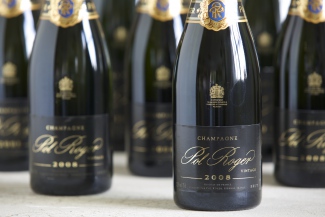 When Pol Roger Brut Vintage 2008Â was launched in February 2017, the house confidently declared itÂ one ofÂ their “greatest ever years”. It didn’t take long for the critics to agree. Jancis Robinson MW awarded it an 18/20 – her highest score for a vintage Pol since Pol Roger Brut Vintage 2002Â – commenting: “Really quite broad and ripe on the nose … very dramatic! Admirably long. Really exciting. Is this a worthy successor to the 2002?”

As more and more 2008s emerge on the market, the vintage’s already-legendary status is being further solidified. Our only hint from Pol regarding their expectations for Churchill 2008 came fromÂ Paul Graham, Director of Business Development, who told The Drinks Business last year: “Our CuvÃ©e Sir Winston Churchill 2008 is the best vintage since 1988 and the most investible Churchill weâ€™ve ever made.”

Although the UK is by far the biggest market for Pol Roger’s prestige cuvÃ©e,Â Sir Winston Churchill 2008Â is likely to be in very high demand. As always, we will have more details here upon release.