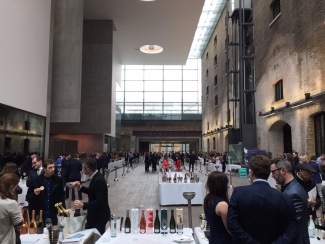 In July 2016, the ComitÃ© Champagne announced that theirÂ popular Annual Champagne Tasting in London would not be staged in 2017. However, this decision was met with industry-wide dismay and prompted several senior members of the UK trade to urge the ComitÃ© to reconsider its decision, whichÂ it finally did earlier this year. TheÂ reinstatement of this event, primarily targeted at buyers from the off- and on-trade, also came with a considerable revamp.

In February 2017, the ComitÃ© announced that it will be rebranded asÂ The Official #Champagne Experience Day, will be hosted at a new and exciting venue, will take place later in March than usual and will include more content such as tutored Champagne masterclasses. We attended the refreshed event at the end of March and were invited to a very interesting masterclass entitled Oxygen in Winemaking.

The lecturer/presenter was Delphine Goffette, a woman whose winemaking knowledge knows no bounds. After a short stint assisting vinification at Champagne Bollinger, Delphine has spent the last six years working as Project Manager of the ComitÃ© Champagne’s prestigious oenology department. A trueÂ winemaking techie, Delphine was all business, explaining the origin of the day’s topic and its rising importance in vinification: “In Champagne, we have always talked about COÂ² because of its relevance to creatingÂ effervescence, but today we are beginning to master oxygen,” she said.

Since the 1980s winemakers have been monitoring oxygen in the winemaking process, but due to a combined lack of both evidence supporting OÂ²’s significance and devices to measure its impact, intensive study has been limited. However, afterÂ the recent rising awareness of Champagne’s propensity to age better in magnum – a phenomenon we have long been proponents of (see article) – more research has been undertaken to assess why. Many producers note that Champagne aged in half bottles (37.5cl) generally displays more oxidative flavour, whereas in magnum the freshness has been preserved.

One explanation for this is the reduced ratio of head space to wine volume in larger formats. The ullage (or head space) doesn’t increase in proportional volume as the size of the container increases – head space accounts for 4% of the volume of a half bottle, but just 2% of a magnum. All three sizes also have an identical neck diameter of 29mm and are therefore subject to the same gradient flow of gases and amount of oxygen re-entry. Consequently, any oxygen entering the bottle and contained in the head space is exposed to a larger volume of wine in a larger format and thusÂ anyÂ oxidative effects areÂ more widely spread.

However, as Delphine then explained to us, this is only partly true. During fermentation, where sugar is transformed into alcohol and the all-important by-product carbon dioxide (giving Champagne its fizz), the impact of oxygen is largely (if not completely) suppressed by the yeast. Most of the superfluous OÂ² produced during the reaction or diffusing into the bottle is consumed by the yeast in sterol synthesis (true Champagne geeks are referred to this in-depth study for more science). Furthermore, this process of oxygen consumption continues beyond fermentation as Champagne is matured on the lees. By the end of second fermentation, the sugars have all been consumed and the yeast gradually die and decompose – a process known as yeast autolysis. All the while, the lees (yeasts that have multiplied and formed a deposit) continues to consume the oxygen for at least 3 years of the ageing process.

Delphine must have noticed the general look of surprised confusion on many of her attentive students faces, as she then took the opportunity to dispel two common myths or ‘wrong ideas’ about Champagne bottles during ageing:
Wrong Idea No 1: The bottle is airtight. The common misconception about bottles and the crown caps they are sealed with (more on this shortly) during second fermentation and ageing is that they are impervious to gaseous exchange. However, as mentioned several times above, a certain amount of oxygen re-entry and carbon dioxide escape does occur.
Wrong Idea No 2: The inner pressure prevents OÂ² intakes. The second general misbelief is that the bottle is further protected from imposing oxygen by the pressure within, a result of the carbon dioxide generated as the yeasts consume the added sugar. This is incorrect; Delphine explained each bottle is approximately 87% carbon dioxide, however the closure permits minutes quantities of oxygen to enter and carbon dioxide to escape.

So how do you control the exchange of gases? Through the intelligent use of crown caps, apparently. Previously unbeknown to us, winemakers in Champagne are presentedÂ a further variable through which to manipulate and express the style they prefer by a choice ofÂ 15 different certified crown cap closures, each offering varying levels of gas permeability. The choice of closure is critical in determining the speed of the Champagne’s development and can depend upon where the winemaker sits on the spectrum of oxidative style and the consistency of the batch of crown caps available. Delphine further revealed that the seal within the crown cap used to be cork but is now plastic, offering greater control. “The challenge lies in finding one that gives consistent results,” she told us. Â The crown caps range in permeability from 0.2Â to 1.6 mg of OÂ²/L/year, so offer fairly substantial variance and are a useful tool in a winemakers arsenal.

The ComitÃ© Champagne place many restrictions on winemakers in this appellation to ensure the continued quality of this beloved beverage and crown cap closures are one such restriction. Although there are fifteen available to choose from, when we met with Dom PÃ©rignon’s assistant winemaker Vincent Chaperon last month to taste the newly released P2 2000, he informed us thatÂ theyÂ “use the least permeable crown cap and wouldÂ go tighter if there was an option.” The houseÂ are well-known for maturing their wine reserved for PlÃ©nitude 2 and 3 release under cork closure rather than crown cap. Whilst the cork itself can contain oxygen, Vincent believes that cork prevents more OÂ² exchange than crown cap and advocates aÂ consequently more complexly developed Champagne. However, he did somewhat frustratedly admit that corks have to be manually disgorged – a process that would take substantially longer were it required forÂ all 5 million of Dom PÃ©rignon’s annually produced bottles.

Impressively technical though this may be, Delphine disclosed that OÂ² exchange across the crown caps can be hard to monitor as the yeasts are busy consuming all the oxygen.Â Research at the ComitÃ© is constantly ongoing;Â currentlyÂ they have reportedÂ a consistent flow of oxygen with crown cap for up to 8 years. As new technology is developed, more interesting study is facilitated – theÂ method of monitoring gas content without opening the bottle presently involves using a laser to determine the mix of gases and how they reflect the light.

So if that’s how to control gaseous exchange during fermentation and maturation to ensure there is no oxygen in Champagne prior to disgorgement, how do we limit oxygen entering the bottle during the disgorgement process if the internal pressure doesn’t prevent this occurring? Oxygen re-entry at disgorgement can vary hugely from 1.2 to 8.5 mg/L – in just a few seconds the bottle could consume as much oxygen as in a few years. The principal factor influencing varying OÂ² intake is the height of the foam. As different bottles have different levels of foam, more oxygen can enter if the wine level is lower. To combat this, in 2005 MoÃ«t began trailing the beer industry’s continuous-stream form of jetting, a technology that swiftly took hold in Reims and is now being filtered onto the disgorgement lines of most Champagne producers.

Â  Â  Thanks to worldoffinewine.com for this figure

The process involves injecting the bottle with a drop of wine at high pressure to trigger foam formation. This foam then acts as a piston, expelling any oxygen in the headspace and ejecting air out of the bottle (see figure on the left). At the precise moment the bubbles reach the lip of the bottle the cork is inserted, compressing the COÂ² and ensuring consistency across all bottles. (If you can excuse the French description, Louis Roederer’s Chef de Caves, Jean-Baptiste LÃ©caillon postedÂ an excellent video of disgorgement, jetting and corkingÂ on Twitter recently). Where other industries may use water for this process, the Champagne region uses still wine. Delphine stressed that the goal is to produce a very clean and pure wine, so adding water is undesirable and potentially unhygienic. 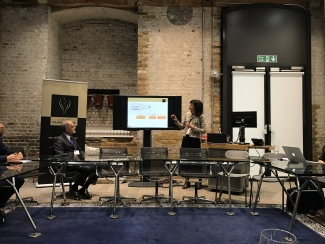 Whilst in theory jetting should eliminate all externally sourced oxygen, in practice bottle oxygen content is only reduced to a (admittedly minute) 0.5 mg/L. We were told this is a direct result of the equipment being calibrated to 90% efficiency in order to prevent ‘overfoaming’. Furthermore, there is oxygen contained in the cork itself to consider. Compressing a cork into the bottle after jetting results in an estimatedÂ 2 mg/L of OÂ² to be released in the first fewÂ days post-corking, according to Delphine. Consequently, one focus of the ComitÃ©’s current research is on modifying the atmosphere within the cork itself by adding nitrogen – a project that is on experimental trial in the laboratory right now.

Overall, this was an enjoyable masterclass and a greatÂ additionÂ to an already educational event – we can only hope these lectures willÂ feature every year. The ComitÃ© Champagne are constantly conducting important research and this opportunity allowed us a rare insight into theirÂ fascinating results. Delphine finished her engagingÂ and informative presentation by reminding us that oxygen is not the absolute enemy and Champagne exposed to it is not necessarily damaged. Instead, the idea is for the winemaker to use this knowledge to produce the style and expression they desire.

We will finish ours with a typically laissez-faire view on oxygen and oenology from one of the most respected names in the region, Jean-Baptiste LÃ©caillon: “In Champagne, every bottle is a fermenter, so every one has a different story. I donâ€™t think we should pursue too much the idea of homogeneityâ€¦ and if we all use the same techniques, then we will kill the story â€“ difference is important.”