Although famous for being one of the most guarded wine regions in the world, Champagne’s biggest secrets are beginning to get out. No doubt driven by millennial-era curiosity, the modern consumer is not just interested in drinking champagne, they want to know its story: how it was produced, why it is unique and how well it will age.

This thirst for knowledge is reflected in the rising trend for more detailed information to be printed on the back label of bottles. Many producers even have smartphone apps (for example, Krug ID) that allow the most dedicated student to discover the narrative of each individual bottle in impressive detail, such as the seasonal challenges of the vintage or the specific villages which contributed grapes to the blend.

One of the most debated and sought after pieces of knowledge for Champagne consumers and connoisseurs is the date of disgorgement. But what exactly is disgorgement and how useful is knowing the date it occurred?

After blending and second fermentation, champagne is left on its lees (dead yeast cells) for a long period of maturation in the cellars. Once ageing is complete, the bottles are rotated (riddling, or remuage) to loosen to sediment created. The purpose of disgorgement is to expel the deposit that collects in the neck of the bottle as a result of this riddling process. This can be completed in one of two ways: mechanical disgorgement (à la glace) or disgorgement by hand (à la volée).

Mechanical disgorgement involves first submerging the neck of the bottle into a refrigerating solution at -27°C. This creates a 4cm long ice plug in which the sediment is trapped. The frozen plug is then ejected under pressure when the bottle is opened, with minimum loss of wine. Modern units can disgorge between 2,000 and 18,000 bottles an hour.

Disgorgment by hand is still used today, but typically only for very small or large bottles and very old vintages. The bottle is first held upside down, and is then opened (using disgorgement pincers) as it is quickly tilted back upwards. A firm hand and considerable experience are essential to ensure only enough wine is forced out to take the sediment with it. A good cellar worker can disgorge up to 400 bottles per day.

(See here for a full summary of the complete Champagne production process).

The Importance of Disgorgement Dates

So why does this matter? Well, Champagne has two distinct lives: one of slow development, relying on the presence of yeast during lees maturation (pre-disgorgement), and another of more rapid development, when the yeast is no longer protecting the champagne from oxygen (post-disgorgement). The evolution of an individual bottle is not solely a question of years since the vintage, but also time since disgorgement. 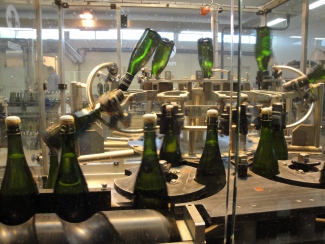 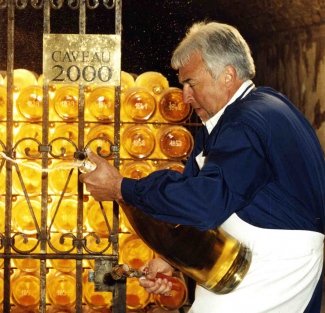 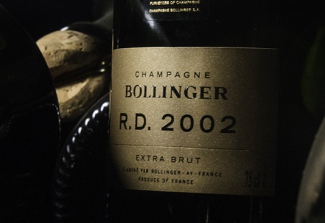 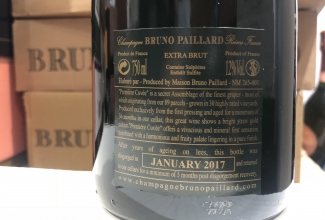 Bruno Paillard were the first to publish disgorgement dates on back labels, back in 1985

As yeast has a unique ability to absorb oxygen for an extended period of time (more than 50 years), champagne kept on the lees will remain fresh for years. However, during the disgorgment process, a small amount of oxygen inevitably enters the bottle. After disgorgement, due to the oxygen that entered the bottle during disgorgement and the oxygen that continues to enter through the cork, the champagne begins the slow ageing process. Therefore, armed with a disgorgement date, the consumer has more information about the true maturity of the champagne, when it began the ageing process and how much life it is likely to have left.

“The date of disgorgement is very important, because a bottle will taste very different six months after disgorgement than it will two years after“ — Didier Gimonnet, Pierre Gimonnet & Fils

For this reason, some Champagne producers release late-disgorgement wines, such as Bollinger R.D., Dom Pérignon Plénitude, Krug Collection and Veuve Clicquot Cave Privée. These champagnes are typically kept on the lees for many more years than the ‘standard’ vintage release (~8 years for original Dom Pérignon vintage vs ~15 years for Dom Pérignon Plénitude 2), during which time they are not only protected from oxygen but develop new levels of complexity and development.

Growing consumer desire to know disgorgement dates is gradually translating into dates being disclosed on the back labels of bottles, with the smaller growers leading the charge. There are even rumours that CIVC, Champagne’s regulatory body, are considering making publishing disgorgement dates on back labels mandatory procedure. For now though, the avid consumer must rely on the information currently provided by the more forthright houses. And for those that don’t have explicit labels or handy smartphone apps, Champagne writer Tyson Stelzer has produced a handy guide to cracking the codes found on bottle and corks.