If you follow us on Twitter, you may have realised that we were quite busy on Friday night (apologies to anyone not interested in our incessant tweeting, but we were having fun!), and were lucky enough to be treated to dinner at Dom PÃ©rignon’s pop-up London maison – a three-floor townhouse in Holborn. As reported last month, ‘Dom PÃ©rignon – Les 3 Ã‰tages’ is the brands latest marketing ploy, offering guests the chance to experience a “journey through time” to discover Dom PÃ©rignon’s transformation and taste the three plÃ©nitudes.

As we were welcomed inside the beautiful Georgian townhouse (we were later told it was actually someone’s home, so if the owners are reading this – thanks), we were immediately aware of Dom PÃ©rignon’s takeover. ExtravagantlyÂ transformed, it was classic DP; masterfully treading the fine line betweenÂ tacky overkill and decadent decor, which extended to neon lights and a contemplation room (more on this later). 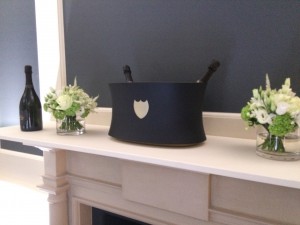 As we took in the opulent setting, we were served a glass of the newly released 2005 vintage. We were keen to try this for a second time and test our theory that the sample bottle we tasted the day before (read our review here) had been subject to slight cork taint; tasting very subdued and with a distinct lack of fruit. Thankfully, we were right – the glass we were served on Friday tasted like a wholly different Champagne! Lively and complex, with aromatic richness, this set the palate alight with fruity flavour, rather than falling flat with premature lifelessness on the tongue.

The new Dom PÃ©rignon ambassador, Tom Harrow (of the brilliant WineChap.com), was our host for the evening. Briefly talking us through the 2005 vintage, with particular reference to its high Chardonnay content – 60%, the highest since the 1970 vintage apparently – Tom highlighted the extremely limited production and interestingly revealed that the next vintage, 2006, will be released later in 2015.

After a brief group discussion of the merits of the new release, and how Richard Geoffroy and his teamÂ have really excelled in producing something special from a tough year, we were ushered upstairs to the dining room. Beautifully decorated (including a mirrored ceiling, marble bar and more neon lights) the 12 of us were seated around a long table, poured another glass of the 2005 vintage and presented with our menu for the evening. 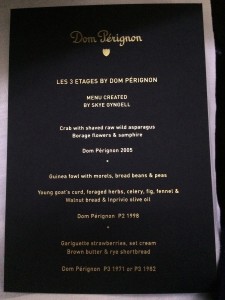 The culinary mastermind behind the food pairings was Skye Gyngell, Australian head chef of Spring Restaurant in Somerset House. Speaking in an interview with The Finest Bubble, Skye explained that the ideology was to keep it “really simple”, commenting that “it’s about the Champagne … the food has to not fight with it, and hopefully enhance it.”

When presented with our first course, it wasn’t hard to see why Dom PÃ©rignon chose Skye; her crab with wild asparagus was the perfect accompaniment to and compliment of the 2005 vintage.Â Her focus was on using spring ingredients, and her attention to detail was evident, the inclusion of borage flowers with the crab, she explained, was that they have a “cucumber-y taste that really goes with DP 2005.”

Next, the significance of us dining on the second floor of the house became clear, as we were poured a glass of Dom PÃ©rignon P2 1998. We had figuratively (and literally) climbed to the second plÃ©nitude of DP, at which point after 15 years of development, the Champagne takes a profound leap to a new quality level. Having not tasted theÂ P2 1998 for six months or so, we were pleased to see that it has developed magnificently already and there’s no doubt this has an exceptional life ahead of it.

Alongside the P2 1998, we were served our main course of guinea fowl with morels, broad beans and peas. Explaining the philosophy behind the main dish, Skye humbly revealed that she “originally suggested pigeon, but Richard [Geoffrey] didn’t want pigeon, as he thought the iron quality was too strong … so I kind of got it wrong on that one!” Her suggestion of guinea fowl as an alternative was warmly received however and boy are we glad! Succulent and moist, this really was delicious: fine food at its very best. Skye elaborated that the focus with the pairings was on the vegetables, and she included sea morels and wild garlic for their “earthy, foresty, spring vegetable” quality and sea kale for its “salty, sea-ness.” 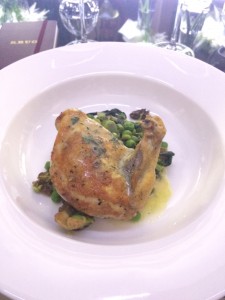 As if we hadn’t already been spoilt enough, next came a very special treat. Calling for silence, Tom announced that he had a surprise in store and informed us in the classically vague terms of a Dom PÃ©rignon ambassador, that he had “stumbled across” a magnum of P2 1993, that he thought would be interesting to try alongside the P2 1998. With absolutely no complaints coming from the guests, the table then fell silent but for the odd sniffing and sipping sound, as we all individually evaluated our latest bounty.

The magnificence of the P2 1993 is hard to overstate. It’s beauty was on the nose – with incredible aromatic depth, it’s a quietly confident Champagne, as opposed to the still quite flamboyant and showyÂ P2 1998. Although lacking a great deal of length, leaving you feeling like the experience was over a bit quick – there’s no denying the P2 1993 is world-class. 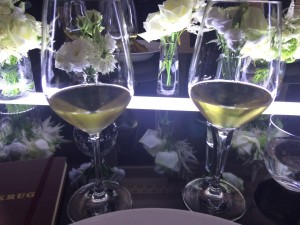 Finally, after we had all fought over the remaining drops from the magnum of P2 1993, we were instructed to progress to the third floor. Knowing full well what this meant, we gladly complied and ascended the stairs into a dimly lit drawing room. As our eyes adjusted to the low light, we appeared to be in what can only be described as a 1940’s gentleman’s lounge, where one might expect the men of the eveningÂ to retire to after dinner to smoke cigars and drink whisky; it was once again classic Dom PÃ©rignon – warm and cosy, if aÂ bit over-elaborate and inessential.

Our focus however, was not on the decor, but rather on the next Champagne. We had already been informed we would be tasting the P3 1971, but this prior knowledge did not dissipate our excitement when it actually came to tasting. As expected due to its age, this was barely a Champagne anymore – a fact that didn’t affect its quality. With little fizz remaining, this was more like a beautifully rich Burgundy. 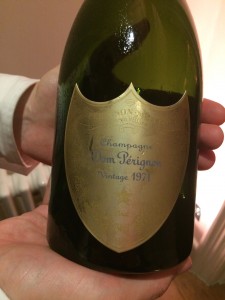 Unfortunately, there was only one bottle available, and after a group discussion of the P3 1971, which involved dropped jaws and gushing praise more than anything, we were back on theÂ 2005 vintage. After our final two courses (young goat’s curd served on walnut bread and a delectable dessert of gariguette strawberries, set cream and rye shortbread), we were invited to try out the “contemplation room.” In one last final exhibition of theatrics it was revealed that Dom PÃ©rignon had converted what must once have been a closet into a perspex-walled-light-show, in an attempt to replicate the feeling of being “inside a Champagne glass.” No comment.

All in all, it was a fantastic evening. The best that fine food has to offer and Champagne of an almost indescribable quality. We were most pleased to see the newÂ 2005 vintageÂ show its true colours; real fruit flavour and a rich complexity. Our thanks must go out to the charming and talented Skye Gyngell (you’ll be seeing us at Spring Restaurant soon!) and of course to Dom PÃ©rignon for an unforgettable evening. Let’s hope all future new vintage launches will be just as luxurious! 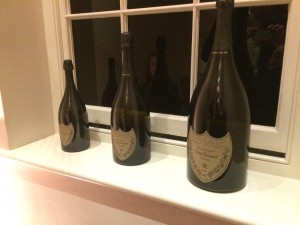