With the recent launch of Dom Pérignon 2006, it is the first time in the brand’s history where it has released five vintages from consecutive years. The run started with the fabulous 2002, a year after the disastrous 2001 vintage, a year you rarely see on a champagne label, since it was one of the rainiest ever recorded in Champagne!

In an interview last week with Dom Pérignon’s chef de Cave, Richard Geoffroy explained that plenty of people had criticised him for releasing five consecutive years of DP, though when you sit and interview Geoffroy you soon get that sense that he takes his role as custodian of the Dom Pérignon brand very seriously. He is pretty scathing about the non-vintage category and there was I writing in my Krug note book; so I made a joke about it and he laughed and said “well of course I know Maggie and team very well and there are always exceptions.” His belief is the expression of the year is what he drives to capture in the DP bottle. He went on and gave me a few examples “2003 was a challenging year, the hot summer created grapes with high sugar and phenolics but the heat meant the grapes had sugar ripeness but a shortened “hang time” meant flavour development wasn’t optimum. Compare that to 2002, flowering was perfect in June and then right through the summer it was never too hot, never too wet and never too dry and the grapes had a long hang time, so all elements in the grape were near optimum, so flavours were great and acidity remained optimum.”

You can see this when you taste the champagnes. They are all great expressions of the character of the vintage. So with this in mind we thought there couldn’t be a better time to taste these last five vintages and do it blind so we can’t be seduced by vintage reputations! I brought the TFB team together and also invited Jancis Robinson and Matt Segar, owner of Fredericks, our local restaurateur with a passion for champagne.

This is the order we tasted, though at the time we blind tasted.

Dom Pérignon 2005
I made comments about the nose with lots of citrus, both lemon and lime, which follows through on the taste and some underlying creamy notes with acidity quite noticeable. 17/20

Dom Pérignon 2003
Seemed similar to the first with those lime notes on the nose, but this had some floral hints and the palate was richer with those creamy notes from the malolactic, but somehow the acidity seemed to dominate and finished quite short. On learning the results I had guessed the 2003 and 2005 the wrong way round! 17.5/20

Dom Pérignon 2006
There was a clue when we tasted this blind, as it had a very lively mousse when first poured. This vintage still had those lemon and lime notes and with hints of jasmine and on tasting you had a sense of purity of fruit and fresh acidity. I made a tasting note that it is sort of calling you for attention and I guess the structure of the champagne is very linear and defined and after learning it was the 2006 then it made sense as it was very young and is just starting its journey towards maturity in many years. 18/20

Dom Pérignon 2002
This had a powerful upfront nose with hints of honey and apple and a suggestion of creaminess. On tasting you got a mouthful of flavours and the trademark brûlée creaminess and at the time I noted it had layers of fruits and I made a comparison to “green gage plums with custard.” I also made a note that it was “a very laid back champagne” which I guess I meant it sort of changes your mood. There is just so much going on in the glass and in your mouth you sort of go into a trance, slow down, sit back and enjoy! 19.5/20

Dom Pérignon 2004
I noted the mousse seemed very soft, lots of citrus and riper fruits on the nose which just developed more on the palate, good balance of acidity and long length. 19/20

Dom Pérignon 1999
This wasn’t blind; but after tasting five consecutive vintages I remembered I had a few older vintages in my cellar, so went and grabbed one! I hadn’t tasted this for years; noticeable rich gold colour, all the earlier vintages had seemed similar colour; this had lots of things happening, bottle aging had allowed the development of secondary flavours like mushroom were appearing, those green gage plums were back and some tropical hints like guava. Was amazingly refreshing and completely different to how I remember it from a few years back. 19/20 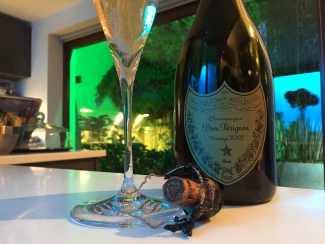 So I had three favourites; the 1999 is another examples of what great champagnes can come from a year that wasn’t considered very good. The 2004 always performs but I still would go for the 2002 which is drinking so perfectly now. I can’t wait until this is released as a P2, though that’s probably 5 years away, since extended lees contact of around 12 years that the P2 receives encourages the fruit to come forward more. Geoffroy comments “that he believes the optimum age for Dom Pérignon to show off its fruit at its peak is with the P2 releases.” It seems another bit of magic happens in those extra years on the lees!

The only person to get all the vintages right in this blind tasting was Jancis Robinson!

To celebrate these fascinating run of consecutive vintages we have worked together with Dom Pérignon to bring you a limited release case, containing one bottle of each of the champagnes mentioned above. These are limited to just 12 cases, so I’d get in early. 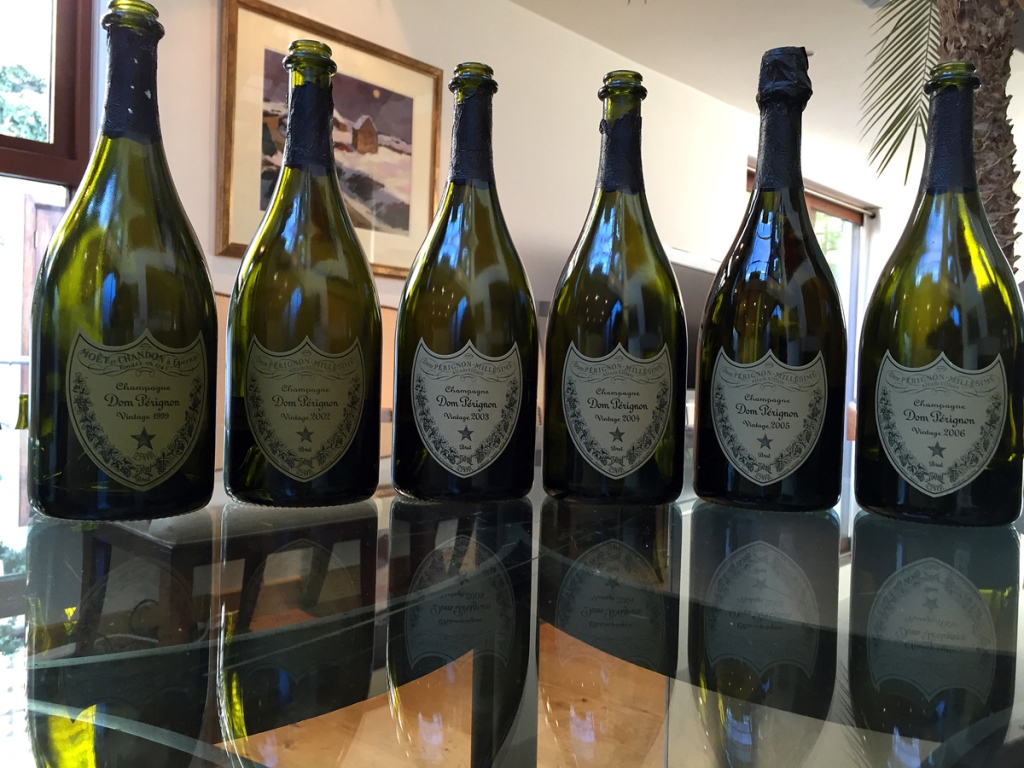