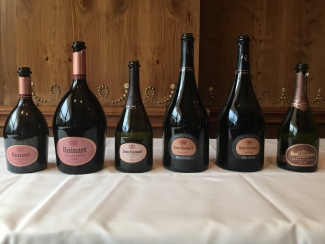 Last weekend, we travelled to The Savoy to meet with Ruinart Champagne head winemaker FrÃ©dÃ©ric PanaÃ¯otis for an educational vertical tasting of four vintages of the prestige cuvÃ©e Dom Ruinart RosÃ©. With a comparison of Ruinart RosÃ© NV from bottle and magnum also on the agenda, it promised to be an enjoyable morning.

Generally famed for its Blanc des Blancs cuvÃ©es, Ruinart was actually the first house to produce a rosÃ© champagne. Archived records reveal that they first shipped a rosÃ© as early as 1764, the shipment log describing it as ‘pheasant coloured’. FrÃ©dÃ©ric told us that rosÃ© champagne was initially made by dyeing white wine with a dark red wine made from elderberries! Apparently the resulting cocktail was quite rustic in flavour and the method was banished in the 1890s, long after Ruianrt had transitioned to the blending technique it still adopts today.

The first Dom Ruinart RosÃ© was produced in 1966 and sold in 1973. The assemblage always uses Dom Ruinart Blanc as the base wine, with red wine from the same vintage blended in – and both are therefore usually made. The dosage varies between 5 g/l and 10 g/l, depending on the vintage. When FrÃ©dÃ©ric joined the house, dosage was typically 12 g/l. Whilst acknowledging that some dosage is needed to prevent oxidation at disgorgement, FrÃ©dÃ©ric prefers Ruinart to be more reductive in style and his winemaking is thus very conscious of avoiding oxygen. 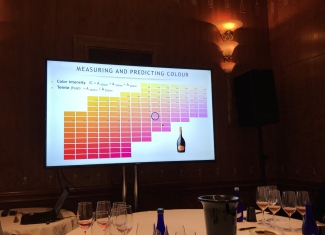 Most interestingly, FrÃ©dÃ©ric shared insight into the importance of the accuracy of colour when creating rosÃ© champagne at Ruinart, stressing: “no colour needs to be the same.” With the use of a sophisticated colour chart (pictured left), he explained how they measure colour intensity and hue as bottles age. Traditionally, the non-vintage may start a luminous violet (G10 on the chart), and soften to the more traditional salmon pink (I9 on the chart) after ageing. “Regular testing really is the key to making consistent rosÃ©,” FrÃ©dÃ©ric told us, and this is achieved through weekly disgorgements. Although he couldn’t reveal exactly how much volume of rosÃ© champagne Ruinart produce, he hinted it was in a similar range to Bollinger and Louis Roederer.

Ruinart RosÃ© NV Magnum
55% PN, 45% CH, inc. 16% Red Wine | Reserve Wine: 20-25% | Ageing: 3 years on the lees | Dosage: 8 g/l
Has gone quite reductive on the nose. Quite noticeable power of fruit and has a robustness to it. Has more weight and longer lees ageing than the bottle. Quite fuller and richer, seems to have more dosage but that is the weight of fruit. 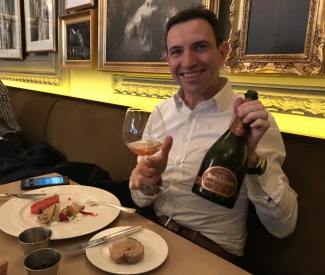 Dom Ruinart RosÃ© 1990 Magnum
83% CH, 17% PN, inc. 20% Red Wine | Ageing: 14 years on the lees | Disgorged: May 2005 | Dosage: 9.5 g/l
Has a hint of oxidation coming through. Strong apple caramel notes and lots of heat. Was a ripe harvest and perhaps this is slightly falling off of its peak. Quite medicinal on the palate and has a menthol,Â eucalyptusÂ character.

Dom Ruinart RosÃ© 1988
80% CH, 20% PN, inc. 20% Red Wine | Ageing: 14 years on the lees | Disgorged: May 2005 | Dosage: 10 g/l
Has a lot more character of age, so old tea and caramelÂ flavour. Showing quite a lot of raisins and seems quite acid dominant. A charming finish, this is surprisingly youthfulÂ for nearly thirty years of age! Very good.

(FAO Ruinart lovers: Earlier this year, FrÃ©dÃ©ric announced an exclusive new late-release champagne on Twitter only. Dom Ruinart Blanc de Blancs La RÃ©serve 1998 is an oenothÃ¨que release that has been aged for fifteen years on the lees, kept (crucially), on cork – a process that decelerates ageing, paving the path for increased complexity and richness. The La RÃ©serve bottles are riddled by hand before being disgorged (also by hand) and left to rest for a further year to achieve maximum complexity. Hand-labelled and individually numbered, these artisanally-produced bottle are incredibly rare. More information can be found on Ruinart’sÂ La RÃ©serve website).