Dominique Demarville, currently Chef de Cave at Veuve Clicquot, has announced he will be leaving the company at the end of the year to join Laurent-Perrier. Demarville is a reputable winemaker, having previously worked as Cellar Master at G.H. Mumm for 12 years, where he successfully restored their reputation as one of the top champagne producers, before joining Veuve Clicquot in 2006.

Demarville was hired to replace retiring Chef de Cave Jacques Peters, whom he worked alongside for several years before taking over as Cellar Master in 2009. He has been influential in the position, gradually revitalising the style of prestige cuvÃ©e La Grande Dame, which is now approaching a Blanc de Noirs, and launching the exciting new multi-vintage cuvÃ©e Extra Brut Extra Old NV.

The news of his departure comes as quite a shock; Veuve Clicquot Cellar Master is typically a lifetime role. Fifty-three year old Demarville is just the sixth man in charge since 1890, the previous five of which all retired in the position, with three of them lasting more than four decade at the helm.

Demarville confirmed he will be leaving at the end of 2019, telling the drinks business: “It is a personal choice taken in complete agreement with LVMH, who I thank a lot for their trust. Iâ€™ve had a great deal of enjoyment all these years in keeping the quality and the style of Veuve Clicquot champagne at the best level. I thank all my predecessors, especially Jacques [Peters], who passed on so many things to me. And I thank Jean-Marc Gallot, Veuve Clicquot President, and the other Presidents before him, for their strong support.”

“All my team is dedicated to the continuity of Madame Clicquot motto: â€˜Only one quality, the finestâ€™. Iâ€™m very grateful for their support along these years. In the coming months, I will concentrate my efforts on the transmission to the person who will replace me and also to the success of the next harvest.”

Demarville will be replacing another legendary winemaker, Michel Fauconnet, as Chef de Cave at Laurent-Perrier. Sixty-seven year old Fauconnet has worked at Laurent-Perrier since 1973, and has held the reins as Cellar Master since 2004. It is worth noting that Fauconnet also produces Salon, the world-famous Blanc de Blancs champagne from Le Mesnil, which is owned by Laurent-Perrier. Doubtless Demarville’s interest in the position was influenced by the added responsibility of taking over this unique role.

The appointment of Demarville is a great scoop for Laurent-Perrier, who have undergone significant transition in the last few years in order to revitalise their image. They have yet to comment on the news. 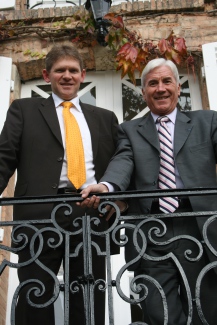