Eric Rodez is a busy man. An eighth generation vigneron, cellar master, husband, father, grandfather and winemaker extraordinaire, he is also Mayor of Ambonnay, and admits to taking a maximum of “10 to 12 days’ holiday” per year. Short in stature and intense in nature, his hardworking character may well be the reason his distinctively bespectacled appearance is so well-known around the Champagne circuit, where he is considered one of the very best grower champagne producers in the appellation.

His eponymous winery is located in the south-east of Grand Cru-rated Ambonnay, a neomodern property with an artistic giant bulldog installed in the front garden, which both somehow seem to reflect the character of the man himself – highly individual and utterly at odds with their quaint surroundings.

It turns out Eric has been an outsider from the beginning, choosing to study in Burgundy rather than Reims (“the Burgundians taught me to maximise the quality, not quantity, of wine”), only coming back to Champagne to start his first job with Henri Krug – not a bad mentor for an aspiring young winemaker.

Despite his first year in charge being the notoriously challenging 1984 vintage – which he described as a “tsunami experience” – Eric persisted. And thank goodness he did. Today, Eric is a leading artisan of his trade. He speaks of Champagne with a philharmonic vocabulary; winemaking is all symphonies, melodies and harmonies. He brims with comparisons between music and wine and the emotions they inspire – something he no doubt developed early in his career under Krug’s mentorship.

That said, Eric is not to be dismissed as another zany old wine eccentric. He is fundamentally concerned with the science of winemaking and shared with us the five dimensions that he feels most shape the style and character of Champagne:

1) CÃ©page – The grape varieties of course play a major role. Although Eric blends just Pinot Noir and Chardonnay (“Pinot Meunier doesn’t age well”), he is also experimenting with long forgotten Arbane and Petit Meslier vines, as their higher acidity is more resistant to the changing climate.

2) Location – Soil characteristics have a huge effect. TheÂ 55-60cm of topsoil that sits above the chalk in Ambonnay plays a significant role in giving the Rodez champagnes their characteristic body and complexity. By comparison, the CÃ´te des Blancs has just 35-40cm of topsoil, giving wines from this southern region a more chalky character.

3) Specific vineyard location – The position of each parcel within the vineyard; where they sit on the slope, and in which cardinal direction they face, are key determinants of grape quality. Most of the vineyards in Ambonnay are south to south-east facing whereas most of the CÃ´te des Blancs is north-east facing. Of the nearly 400 hectares planted in Ambonnay, the most prized are the mid-to-high slopes where the hillsides rise up several hundred metres affording spectacular views over the surrounding communes. Vine age also plays a fundamental role.

4) Vinifcation – Subtleties and nuances in style are created using different tank shapes and materials, such as enamel, stainless steel, oak cask, and concrete eggs. Over the years, Eric has been doing more vinification in oak barrels and less in steel tanks. His preference is for two-year-old barrels from Burgundy and he stores prospective reserve wine from the current vintage in barrels for continuity into the next year.

For a man who has been making wine for over three decades, Eric is refreshingly inventive.Â “It is very important to open the windows to opportunity. [This is] difficult for French people… we do not experiment, which makes progress hard.” A zealous advocate of organic and biodynamic viticulture, Eric is one Frenchman who has no such difficulty innovating.

Since 2006, he has been using aromatherapy in the vineyards, a practice which he learnt from his grandmother. His specific blend of essential oils was difficult to ascertain (something like essential oil of orange + soap + water), however the goal is simple: the aromatherapy forms a film/layer that protects the leaves from mildew, thereby reducing the need for copper. “I am organic and biodynamic certified, however it is impossible to totally get rid of copper and sulphur.” In organic viticulture, copper is used to treat mildew and sulphur to treatÂ oÃ¯dium (powdery mildew), yetÂ copper is toxic for the soil and sulphur is toxic for the wine. “Using oils reduces the need for copper.”

Eric sells 1 hectare of his grapes to the big houses – and not solely for cash flow requirements. He is astutely aware of the competition from other appellations (Prosecco and Cava were, again quite refreshingly, directly mentioned) and acknowledged that the bigger houses do the leg work of promoting the ‘Champagne’ brand, so need high quality grapes to maintain its prestige status as the best sparkling wine.

The Champagne Rodez range consists of ‘author’ champagnes, terroir champagnes and single vineyard champagnes. The author champagnes (tasting notes above) are non-vintages and are all about blending. Where other producers will typically use just 20% reserve wines in their non-vintages, Eric uses, on average, an astonishing 70% reserve wine.Â The terroir and single vineyard champagnes are interfered with as little as possible in order to respect and preserve the expression of individual vintages and terroirs.

The majority of the range are Extra Brut – the highest we tasted was 4 g/l – however they are labelled as Brut, for two reasons. The first is because Eric cannot be certain the next vintage will be Extra Brut and the second is because he does not want to seem fashionable. “I do not use dosage for the fashion, but for the necessity.” Each bottle has a QR code which can be used to ascertain more information about the champagne.

As we drove along the bumpy roads back to the winery, Eric’s work ethic again came to the fore. “For me, it is very important to observe 3-4 single vineyards every day,” he said. One cannot help but think it won’t be long before the torch is passed to his successor, however. Eric, who confessed he is finding it harder every year, will be stepping down as Mayor in 2020, having served in the position for 31 years. “Now, I have no energy. Itâ€™s very, very difficult.” Fortunately, his 36-year-old son Mickael, who currently looks after the vineyards, is in prime position to take over. 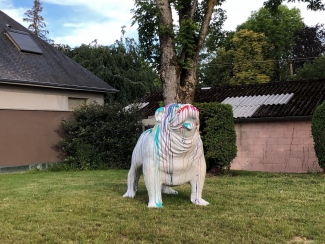 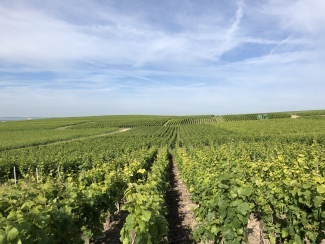 Rodez own 6.12 hectares of vineyards in Ambonnay 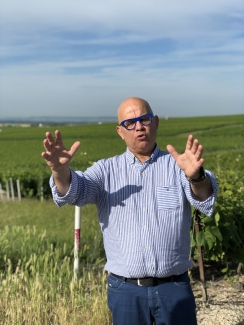 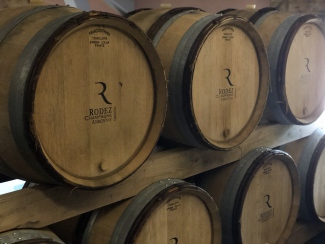 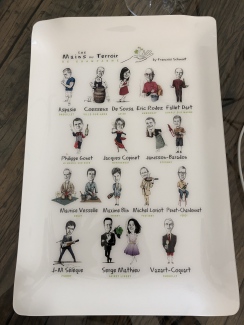 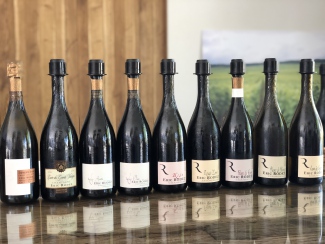