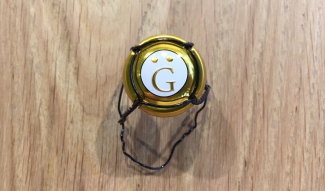 Founded way back in 1625, Champagne Henri Giraud is one of the oldest houses in the region. Loyal to tradition, it is still very much a family-run business and is currently owned by twelfth generation Claude Giraud. Claude’s son and thirteenth generation, Emmanuelle Giraud-Patour manages the company and son-in-law Sébastien Le Golvet is head winemaker. Based in the majestic village of Aÿ, Champagne Henri Giraud has stood out in the last decade thanks to Claude’s obsession with the forest. Creating oak casks solely from the wood of trees grown in the local Forest of Argonne (the famous site of many World War I battles), Claude’s mission is one of ultimate locality, linking casks with the concept of terroir in the forest. 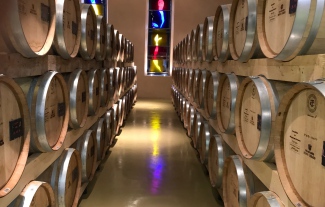 The house bring in 80 new oak casks per year

Claude has been leading this quiet revolution at the helm of his family business for some 25 years. The concept was born in 1990, when he took advantage of the excellent quality of the vintage and created a grande cuvée made entirely in oak: the ‘Fût de Chêne’ (oak barrel) cuvée. Opening a whole new discussion on the relationship between wine and wood, Claude’s revolution was based on a single idea: the Argonne Forest. Until the 1950s, this forest – the largest close to the Champagne region – was the primary source of wood for the barrels used by local winemakers. “Then we started to use external coopers,” says Claude. “We sometimes used several different coopers for a single cellar, using woods from different natures and origins and only one treatment on the wood grain – heat. Things haven’t changed much since the 1960s.”

Claude decided to explore how local oak interacted with local wine. Commencing research on the traceability of oak casks alongside a French staves expert, Claude’s justification was that: “wood can be tasted, same as the grape… it has different notes, affected by age, by soil… soft, round, bitter.” The first milestone in their research was the 2002 creation of an Argonne cuvée, produced exclusively in new casks made from Argonne wood. “This vintage is a super star, the very best in terms of truthfulness,” enthuses Giraud. “Here, the wood isn’t just an ingredient, and certainly not a kind of makeup. Vinification in oak casks gives the wine life like never before. It is interactive vinification, interaction between the lands and soils of Aÿ and Argonne.” Henri Giraud Argonne was subsequently produced in 2004 (see notes below) and the latest 2008 release will be launched later this month. 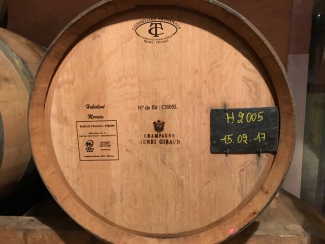 Each cask is labelled with oak origin

Since then, Claude has bought “set up” oak trees in the Argonne Forest. In 2005, he organised a comparative tasting of four “white wine” forests and discovered that the Argonne was perfectly matched with wines from Champagne. Gradually, it became clear that the geology of the soil influenced the character of the oak as well as the vine itself. Such a revelation gave new options and perspectives when it came to blending and vinification. “On tasting, links between types of wood, types of terroirs, types of juices became clear.  We were suddenly able to focus on tones and undertones, on contrasts.” In order to monitor the impact of oak grown in different types of terroir, the house bring in some 80 casks per year – on which they perform a five year rotation, experimenting with the different cuvées. Each barrel is labelled with the plot of the Argonne Forest that the oak originates from (see picture on the left).

Claude’s dedication to innovation is unquestionable – the Argonne cuvée is the culmination of work spanning a quarter of a century – and his investigation is developing continuously: in 2006 he began research on the oak’s DNA. The results of this work are still pending and will be for some time…. it takes between 180 and 200 years for oak to reach full maturity.

We visited the house during our Vins Clairs visit last month to discover the Henri Giraud oak philosophy and learn all about their latest experiment: maturing wine in terracotta eggs. 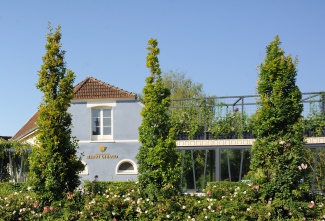 Situated just off the infamous Boulevard Charles de Gaulle, the main road running through legendary Aÿ, the Henri Giraud winery looks relatively nondescript from the outside. However, as the metal gates open automatically to reveal a surprisingly modern estate complete with beautifully kept gardens, Claude’s commitment to naturally produced Champagne paired with a dedication to innovative winemaking techniques is unavoidable. As we were given a tour of the contemporary grounds, Henri Giraud’s entirely natural approach was reiterated again and again, not least when we arrived at the site of their latest endeavour and the prize of the property: the terracotta tanks/jars/eggs.

The link between terracotta and wine has its roots in the Greek-Roman period when clay vessels were used to transport and trade wine. Given the recent market trend towards environmentally friendly viticulture techniques; the increase of biodynamic and organic farming; the widespread abolishment of herbicides and pesticides; and a generally greater sensitivity of winemakers towards the use of natural materials, it is unsurprising that the wine trade is experiencing a return to clay containers. 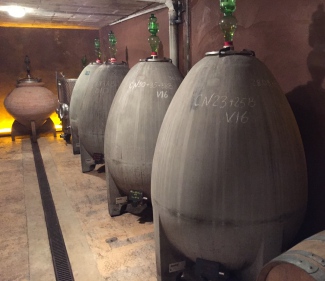 Eggs enhance the motion of the lees

The physical characteristics of terracotta enable excellent results in the fermentation, maturation and storage of wine. From a technical standpoint, the material provides excellent thermal insulation, ensuring all-important protection from excessive temperature changes during storage. The clay’s natural porosity also allows a benign passage of oxygen, particularly useful when determining the optimal maturation of red wines (but perhaps not so relevant to Champagne ageing).

What’s more, there is also method behind the madness of the aesthetic design of the egg-like tanks. As we know, the contact of wine with the lees is very important for maturation and refinement, particularly in white wines. Reportedly, wine fermented in an egg-shaped container undergoes continuous convective motions that tend to maintain the suspension and encourage movement of the lees. Essentially, the egg shape enhances the natural motion of the lees – imagine a continuous bâtonnage, if you will.

Henri Giraud’s transition began in 2009 when the house bought 10 terracotta tanks from Italian potters, Artenova. Generally considered the masters of the trade, Artenova are world-renowned, export globally and their website interestingly also lists Champagne Jacques Selosse, Aubry Champagne and grower Benoît Lahaye as clients. Based in a region of Tuscany called Impruneta, the company worship Impruneta clay, claiming it “has been proven not only to have extraordinary physical characteristics but also chemical ones, allowing it to be used without any worries with regard to exchanges of toxic substances”. 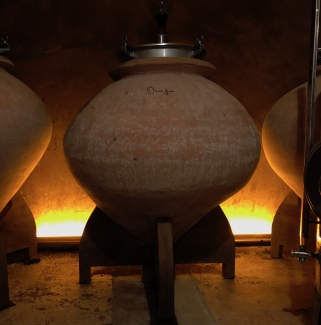 The Dolium: a new ovoid-shaped tank

The house now have over 50 terracotta eggs and are also experimenting with ‘The Dolium’, a spherical or ovoid-shaped container (see picture on the right). Winemaker Sébastien hails the impact of clay on the characteristics of the wine and plans to investigate the varying effects of terracotta sourced from different terroirs – an idea reminiscent of his father-in-law’s oak research. Particularly interesting we were told, is the strength of wine fermented in terracotta and then matured in oak casks, something the house are only just beginning to see the results of.

Unfortunately we could not taste the ‘terracotta wine’ – reportedly an unusual experience due to its orange colour. However, on completion of our tour we were invited to the tasting room – complete with immense oak table made from wood of the Argonne Forest, of course – to taste the Champagnes that wine matured in terracotta can produce. The samples from the current Henri Giraud range we tasted included new cuvée, Esprit Nature and the latest release of the house non-vintage, Aÿ Grand Cru MV10.

This brand new cuvée replaces the old Esprit de Giraud. Confusingly, ‘Nature’ does not relate to the dosage – which is always around 8 g/L in Henri Giraud Champagnes. Rather, the name unsurprisingly translates as the ‘Spirit of Nature’ and is a homage to the house’s commitment to the origins of Champagne and respect for the terroir and wood of the Argonne Forest. The wine has been matured for 6 months in 50% terracotta eggs and 50% oak barrel and marks the end of stainless steel at the winery. 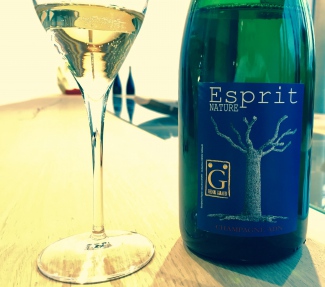 Produced solely from wine sourced from Grand Cru vineyards in Aÿ, the multi-vintage will no longer be referred to as ‘Fût de Chêne’. This re-branding doesn’t stop there; the bottle has been designed to imitate the shape of an upside-down Champagne flute and is closed with a 24-karat gold coated ‘staple remover’. Each bottle ordered is thus supplied with a specially designed opening device called Les Crayères, made from the oak of recycled barrels. 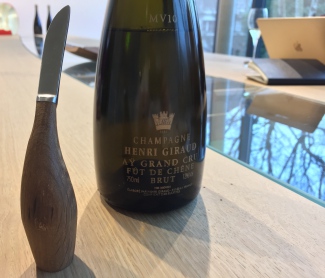 Aged for one year in barrel (30% of which are new) Argonne then spends 8-10 years in bottle before release. The only vintage wine in the Henri Giraud range, Argonne is a unique cuvée produced in extremely limited quantities. For the first two vintages – 2004 and 2002 – just 8,000 bottles were produced. The latest release, 2008 is due to be launched later this month and will be scarcest vintage yet: just 4,000 bottles have been made. Fittingly, for every bottle of Argonne purchased, a donation is made towards the replanting of the Argonne Forest.

Whilst we applaud their use of MV (multi-vintage) – a much better connotation for non-vintage Champagnes which are, in essence, a blend of multiple vintages – Henri Giraud’s attempt on naming their Champagnes seems unnecessarily confusing. The use of ‘Nature’ in the new cuvée and the re-branding of Fût de Chêne (although still labelled on the bottle) seems disjointed and has the potential to confuse consumers. 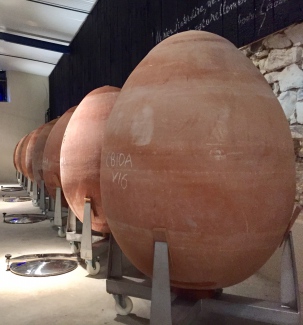 Overall, our visit to Henri Giraud was understandably unique. Still a relatively small producer with just 10 hectares of vineyard and an annual production of 250,000 bottles, their comprehensive transition to terracotta tanks is an impressively bold undertaking if nothing else. The results are relatively inconclusive, though it would be interesting to taste the base wines fermented solely in terracotta eggs. Only time will tell if other houses follow suit.

However, the house still appear to have some issues with effective communication and branding. Positive initiatives such as engraving the disgorgements dates on the side of every bottle are somewhat offset with the house’s refusal to provide technical sheets. “The information is gained by visiting the house,” we were told. That said, with the secure backing of a confident Asian market – a whopping 50% of Henri Giraud’s produce is exported to Japan – no doubt they will continue to flourish.

With their experiment in terracotta ageing, Henri Giraud are stepping into the unknown and attempting something previously undemonstrated. Are they mad? Well, Einstein once famously said that: “If at first the idea is not absurd, then there is no hope for it.” Fingers crossed this development is a stroke of genius, rather than one of insanity.