Although it is the prestigious prestige cuvÃ©es, new experimental blends and hyped-up vintage releases that receive the lion’s share ofÂ attention (and therefore column inches) from wine writers, critics and merchants, it is undeniably the brut non-vintage champagnes that form the backbone of the industry. Accounting for more than 80% of the region’s total sales, brut non-vintage is the chef de cave’s bread and butter. They are the most difficult and time consuming champagnes to create and they generate the revenue that, quite literally, keeps the bubbles flowing.

Perhaps because of their widespread availability, brut non-vintages are often the champagnes most overlooked by journalists and connoisseurs. They are the entry level cuvÃ©es, the ones swirled and tasted countless times, blended and bottled for mass consumption, whose stories have been told to exhaustion.Â However, while heads have been turned to the glitz and glam of the ‘next-best-vintages’, a quiet revolution has been occurring with non-vintage champagne.

For decades the industry has been peddling the myth that brut non-vintage champagnes are created equal, maintaining the same consistent quality and taste year upon year. In reality, while each annual blend may be created to fit a certain house style, they are far from identical. This fantasy was emphatically shattered by Krug in 2016 when they began acknowledging the intricate distinctions between each Grande CuvÃ©e blend and, further, chose to make a virtue out of this variance.

In recognition of their heterogeneity, each newÂ release is now aÂ numbered ‘Edition’ with an ID code on the back label that allows consumers to discover every minute detailÂ online, or via a smartphone app (a similar strategy has recently been adopted by Laurent-Perrier for their multi-vintage prestige cuvÃ©e, Grand SiÃ¨cle ‘Iterations’). However, while Krug and their world famous reputation generated the necessary exposure to bust the myth once and for all, they were actually a little late to the party.

When brothers Jean-HervÃ© Chiquet and Laurent Chiquet took over Champagne Jacquesson in 1988, it was already a well established house. As was (and still is) typical, the range included a brut non-vintage champagne, called Perfection, and a vintage champagne, called Grand Vin Signature. Again, as was and still is traditional, they aimed to create a consistent character and taste with Perfection NV from one release to the next. In the late 1990s however, after creating a blend that was preferable, but different, to the classic Perfection style, they realised the inherent flaw in the system: that blending to match a predetermined homogenous style often meant intentionally producing inferior champagne.

In 2000, with the value of consistency called into question, the Chiquets jettisoned both the non-vintage and vintage blends, replacing them with a new champagne: CuvÃ©e 728 (so named as it was the 728th blend created since 1898, when the house beganÂ keeping records of every wine made). Since then, a single numbered cuvÃ©e has been produced each year – 729, 730 and so on (sound familiar?). With the brothers having just finished assembling Jacquesson’s 746th blend, we met with Jean-HervÃ© at the house in Dizy to learn more.

“If you really want a non-vintage wine to be consistent, you should express the best possible blend every year,” Jean-HervÃ© told us, sitting comfortably in a relaxed yet stylish reception room that overlooks the vineyard at the rear of the house. “If you truly aim to make the best wine, that means not saving the top grapes for the vintage only. In this way, the [non-vintage] wine is better, and it is different year upon year.”

Like other non-vintage champagnes, the Jacquesson CuvÃ©e 7-Series is produced every yearÂ with the most recent vintage constituting the majority of the blend. However, for Jean-HervÃ© the similarities end there. “[CuvÃ©e 7-Series] is not a non-vintage for two reasons. One, it doesn’t aim for consistency, and two, our use of reserve wines doesn’t cover up the vintage.” In keeping with their philosophy of simplicity, the reserve wine content is “just the previous cuvÃ©e” and between 20-30% is added each year.

Rather than constituting a non-vintage style, the 7-Series could be more accurately called a vineyard style. Since its inception, the vineyard sources have remained essentially the same: Grand and Premier Crus in the Marne Valley and the CÃ´te des Blancs, such as AÃ¿, Dizy, Hautvillers, Avize, and Oiry. The blend is always Chardonnay based (typically around 50%), with the remainder roughly equal parts Pinot Noir and Pinot Meunier.

Jean-HervÃ© seemed rightly proud of the fact that he and his brother “have never missed a vintage.” Though the production quantities are often reduced, they always strive “to make something.” We tasted the current release, CuvÃ©e 741, alongside the previous and future releases and a selection of older, DÃ©gorgement Tardif, blends.

The brothers are charmingly hands-on in their approach. Jean-HervÃ©, once the cellar master, now primarily covers the commercial side of the business, leaving younger brother Laurent to manage production in the cellars. Both however, still work closely with their vineyard manager,Â Sylvain Leblanc, paying close attention to even the tiniest details. As an example, Jean-HervÃ© led us to the small vineyard in the garden to show-off their ‘aerated vines’. “We have less botrytis as the vines are aerated, they aren’t drowned in leaves.”

Taking the opportunity to tell us more about their holdings and vinification methods, Jean-HervÃ© revealed that annual production, at 250,000 bottles, is quiteÂ low, “because we want to make better quality wines”. They own 18 hectares in the VallÃ©e de la Marne (and buy from a further 6 ha) and 11 hectares in the CÃ´te des Blancs (and buy from a further 2 ha). They limit their purchases from buyers as much as possible (they parted from their largest buying contract in 2008) as “it is better to focus on our own vineyards.”

Viticulture at Champagne Jacquesson is “semi-organic”. OneÂ third of the domaine is certified, while synthetics are still used elsewhereÂ to protect against mildew. “We do both … we know that life is not that simple.” They start work on the soils very early in the season, either ploughing or cover cropping each vineyard, depending on “the weather, the vines, and ‘your nose'”.

Some of their strictest practices occur at the pressing station. The brothers only only use vertical presses (as horizontal presses are “more abusive”) and put dry ice into the juice as soon as it starts to pour, giving a physical cover of CO2 and thus creating an inert atmosphere free from oxygen.

Touching on the oft-held debate over whether to use taille (the second, inferior pressing of the grapes), Jean-HervÃ© told us, “Grand Cru Chardonnay is supposed to be good, but we don’t ever use taille“.Â Jacquesson typically exchange their tailleÂ for cuvÃ©eÂ (the first, superior pressing) and will even sell theirÂ cuvÃ©e if it doesn’t meet their impeccably high standards. “We do not keep juice which is not good enough … if we don’t like it, we sell it!” As an example, they sold more than 40% of their grape juice after the difficult 2001 harvest.

Malolactic fermentation is never blocked at Jacquesson, for two reasons. Firstly, “because where Champagne is located, lack of acidity is not a problem, even with climate change,” and secondly, “because the process is invasive and you have to add more sulphite and filter.” They typically do some bÃ¢tonnage (stirring of the lees) once every two weeks, aiming to “never let the wines become clear.” For Jacquesson,Â bÃ¢tonnage gives more creaminess and has an anti-oxidative effect, which means they donâ€™t have to add sulphites.

They donâ€™t do any fining, (“not sure why anyone does it [fining] in Champagne … we have dosage and other elements”) and the dosage is always kept low. The brothers blind taste samples between 0 and 3 g/l and choose the best one. The majority of their champagnes (40-45%) go to the French market, with the remainder exported (in descending quantities) to: Italy, Japan, Germany, US, Belgium and the UK.

“The single vineyards are made by Mother Nature. Take a great vineyard, wait for a great vintage and you will have a good wine,” Jean-HervÃ© told us. We tasted the (current) 2008 vintage release of all but the rosÃ©, a preview of upcoming Terres Rouges 2012, and one older bottle, Champ CaÃ¯n 2004.

Jacquesson further helped pioneered an honest and unadorned approach to bottle labels. Great care is taken with the labels to transparently detail all relevant information about the wine (without marketing flourishes), creating a deeper connection between producer and consumer, which is at the very heart of everything they do. 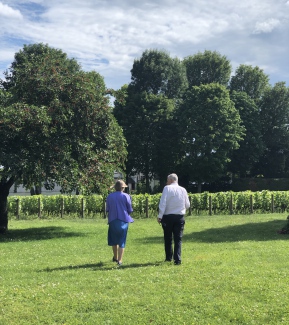 Jancis Robinson and Jean-HervÃ© Chiquet heading down to the vineyard 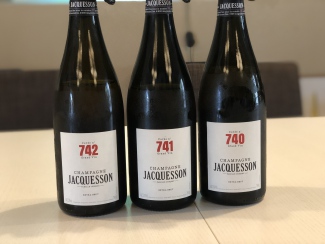 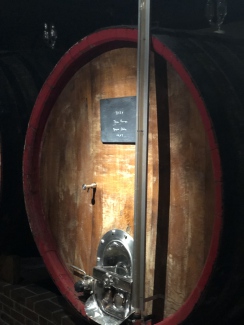 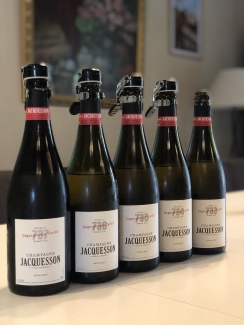 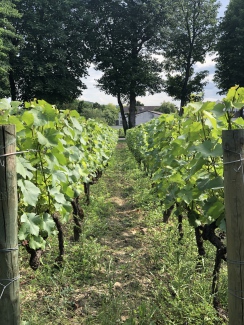 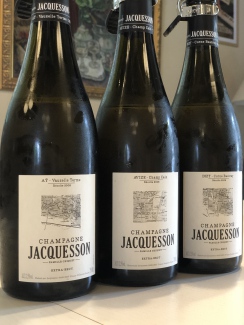 There are four single vineyard champagnes in the current Jacquesson range 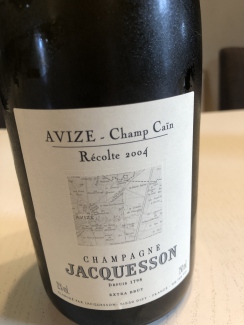