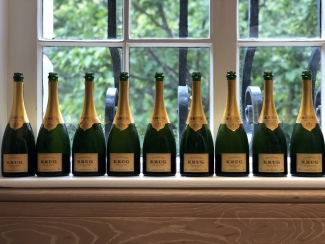 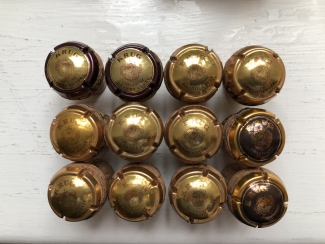 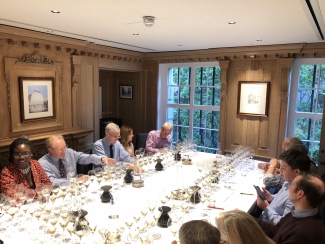 A busy and focused Lutyens Room at 67 Pall Mall 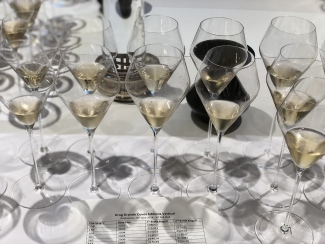 Colour variance was slight, not giving away anything 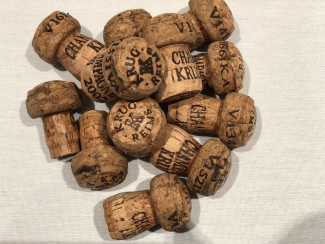 The sign of a good evening? Twelve Krug corks

Last year, we blind tasted Krug Grande CuvÃ©e Editions 159-163 NV (base vintages 2003-2007) with Jancis Robinson MW. Showcasing the very best of Krug and the subtle nuances of their famous non-vintage blend, we found the experience so interesting that we decided to offer it to consumers. And since a few more Grande CuvÃ©es are now on the market, the opportunity to compare a greater range of Editions was too good to miss. As such,Â we assembled nine Krug Grande CuvÃ©e Editions: 158-166 NV (base vintages 2002-2010) and two Krug vintages:Â Krug 2002 and Krug 2004, and headed down to the Lutyens Room at 67 Pall Mall for an evening of all things Krug.

“At Krug, weâ€™re not about consistency but generosity. We donâ€™t work to a rulebook or a formula and want to celebrate the differences from year to year” – Olivier Krug

Further, as Krug handle their multitude of reserves wines in individual batches before vinification (typically one grape variety, from one vineyard and one vintage), they have several hundred blending components to choose from for Grande CuvÃ©e. Well over 100 different wines from more than 10 different vintages are typically chosen. For this reason, Krug prefer the term ‘multi-vintage’.

Given the typically high percentage of reserve wines from such old vintages, Krug manage to produce a very consistent style and quality with Grande CuvÃ©e each year. However, with 50-70% of the blend coming from one base vintage, each Edition inevitably displays subtle differences that showcase the characteristics of that year.

In late 2016, Krug began numbering each Grande CuvÃ©e blend to promote the individuality of each creation and allow the ageing capacity and potential complexity of Grande CuvÃ©e to be understood. Now that Grande CuvÃ©e displays its Edition on the label, the famous non-vintage can be fully appreciated as a series of difference releases – which can now be easily compared and explored.

“We are in the domain of creation, doing something unique, a masterpiece every yearâ€¦ every year there is one creation, one blend, one bottling, and this house has been doing this for 170 years” – Margareth Henriquez, Krug CEO

To our knowledge, this was the most comprehensive tasting of Krug Grande CuvÃ©e Editions to date. It was our job to score the champagnes and identify the Editions and the vintages (if possible!). All eleven champagnes were served blind in a random order. They are presented below in chronological order with the vintage champagnes at the end.

As we tasted, it became quite clear that distinguishing between Krug Grande CuvÃ©e Editions in a blind tasting was going to be a very difficult task. Although there was no doubting that each glass displayed an inherently different personality, any vintage characteristics (such as acidity levels and ‘type of fruit’) were somewhat masked by the high percentage of reserve wines.

Age, or lack of it, emerged as the most useful indicator. The younger Editions clearly had a youthful zest, real show-off champagnes that demanded attention; whilst the older Editions had all the creamy maturity you’d expect from a vintage cuvÃ©e, rather than a non-vintage blend.

Interestingly, identifying the two vintage champagnes amongst the pack wasn’t easy either: likely a consequence of the age and diversity of reserve wines in each blend lending the older Grande CuvÃ©es surprisingly mature characteristics. A few guests spotted Krug 2004 but Krug 2002Â was one of the most elusive, with many confusing it for the older Grande CuvÃ©es,Â Edition 158 NV andÂ Edition 159 NV. Rather than reflecting poorly onÂ Krug 2002, it is a testament to the youthful vibrancy of a vintage now sixteen years old, that will age magnificently for years to come.

Whilst scoring champagne is a worthwhile exercise to determine personal favourites, ranking champagnes of this stature is a somewhat arbitrary process that inevitably reveals more about individual preferences rather than distinguishing good from bad. Notably, the point differential between the lowest and highest scored champagnes was just 1.5/20.

That said, the table below shows the order of rank on the evening. In general, the group seemed to prefer Grande CuvÃ©e Editions with an older base vintage. Edition 159 NVÂ placing as joint favourite came as no surprise to us. Based on the slightly ‘weaker’ vintage of 2003, the philosophy adopted to produce Grande CuvÃ©e means higher reserve wines are typically plundered to keep the quality high in poorer years (in this case, 37%).Â The overall group average score for every champagnes tasted was 18.5/20, a testament to the consistent supremacy of every Krug champagne. 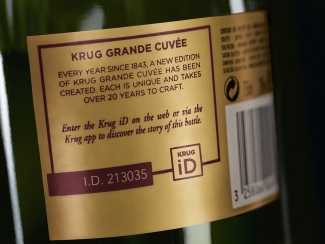 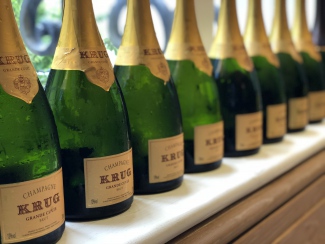 Krug Grande CuvÃ©e NV has beenÂ displaying Editions since 2016, which is your favourite? 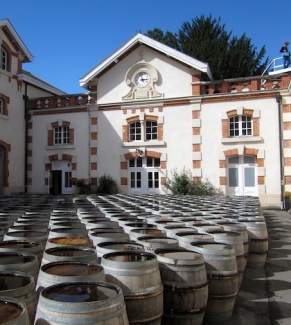 Krug ferments its wines in small & never new oak barrels, some 4000 of them. Post fermentation each parcel is kept separate in small stainless steel tanks.