The elegant gates at Champagne LP 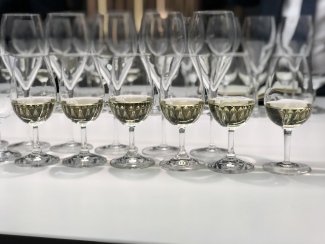 The Chardonnay vins clairs were the making of 2017

Our third day of vins clairs tastings began in Mareuil-sur-AÃ¿, a Premier Cru village in the east of the VallÃ©e de la Marne and home to Champagne Laurent-Perrier. We were greeted byÂ Marketing Diretor Olivier Kanengieser, who led us deep underground to the tasting room and laboratory of veteranÂ Chef de Cave Michel Fauconnet, where we learned all about the 2017 vintage for Laurent-Perrier and conducted a vertical tasting of Vintage and Grand SiÃ¨cle champagne.

“It was an easy harvest until the end of July,” Fauconnet began. “And then the rain came.” Typically, Champagne enjoys 4-5 days of sunshine pre-harvest, however in 2017 the region experienced 4-5 days of rain before the sun arrived. As with other houses, Laurent-Perrier reported that the Pinots had been adversely affected more than the Chardonnays. “[Harvest] was easy and fast for the Chardonnay, but not so much for the Pinot Noir… it was difficult getting the right maturity,” Fauconnet said.

As the white grape is the dominant variety in their blends, vins clairs tastings at Laurent-Perrier always begin with Chardonnay. We tasted a range from villages all over the region: the CÃ´te des Blancs, Montagne de Reims, VallÃ©e de la Marne and the CÃ´te de SÃ©zanne. The first three were an education on the impact of geographical location. The Grand Cru villages of Le Mesnil, Avize and Cramant are all situated within 10km of each other in the centre of the CÃ´te des Blancs, yet the diversity between the three was astounding.

Le Mesnil was straight, pure and gentle on the palate; Avize – normally celebrated for its elegance – was quite round and full-bodied; and Cramant was soft yet surprisingly generous. Fauconnet described all three of them as atypical, displaying characteristics not usually seen.

Fortunately for Laurent-Perrier, they got lucky with their Chardonnay from Villers-Marmery. This Premier Cru in the east of the mountain was subject to a lot of botrytis in 2017, but the Laurent-Perrier vineyards were spared. The final Chardonnay we tasted was from theÂ CÃ´te de SÃ©zanne . A region not normally famed for harvesting great white grapes has this year produced a mature, richly flavoured base wine with impressive tension from the supporting acidity.

“Overall, it was a very complicated year for the Pinot Noirs… there is not as much evolution and structure in 2017,” Fauconnet said as we moved onto the Pinot base wines. Asked if they did any grape sorting during the harvest, he told us it wasn’t immediately obvious which were the bad grapes. “The juice wasn’t obviously diluted – it was only after fermentation that it became clear they were,” Fauconnet added.

That said, they were some promising vineyards. The wines from Ambonnay and Verzy – two consistently high-quality Grand Crus in the east of the mountain – were both clean and well-balanced, although perhaps lacking some of the fruit forward character normally expected (a result of the heavy rain and consequent dilution). One village without any climate problems in 2017 was Les Riceys, the largest village in Champagne, located on the southern border of the Aube. Whereas wine from Ambonnay is usually much warmer and generous than wine from Les Riceys, the reverse was true in 2017 – Fauconnet told us Les Riceys will be instrumental in this years CuvÃ©e RosÃ© blend.

Finally, we tasted two Pinot Meunier wines. The story here was similar to that of Pinot Noir, however the Meunier underwent an unusually fast evolution. This was most evident in the base wine from Damery, which was like a reserve wine already – less intense and tight than other vins clairs and even quite calm and settled, showing incredibly early signs of maturity and evolution. 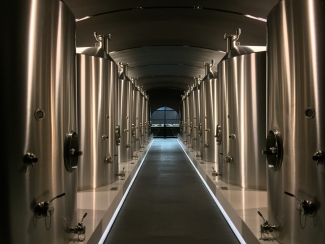 Â  Â  The renovated cellars leading to the tasting room 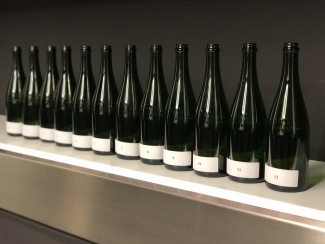 “It was difficult getting the right maturity in 2017” 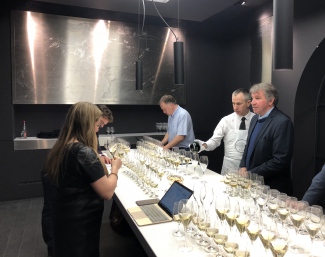 Michel Fauconnet has been at Laurent-Perrier since 1974 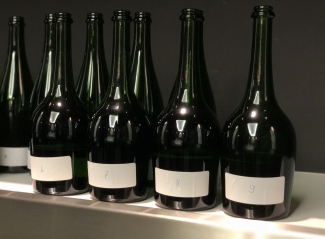 The past, current and future Grand SiÃ¨cle NV blends

Overall, the picture for Laurent-Perrier is a bit brighter than for others in 2017. “The Chardonnay was best and for most of Champagne that is the key element,” Fauconnet summarised. Asked how the CuvÃ©e RosÃ© blend is coming along this year, Fauconnet conceded it had been more difficult than previous years due to the poor quality Pinots, but was surprised at the body and fullness. “We picked early to avoid the weather, so there is less volume but the selection is good.”

To conclude our visit, we tasted some finished champagnes. Our first flight was a vintage vertical, which included a trial disgorgement of the forthcomingÂ Laurent-Perrier Vintage 2008. Not expected to hit the market for another year or two, this was understandably still quite tight on the nose but looks to have great ageing potential.

Fauconnet commented on the rarity of having three good vintages in a row – 2006, 2007, 2008 – and shared his love for the latter. “1976, 1990 and 2008 are my favourite years for vinification,” he told us. We thought the Vintage 2008 was tasting superb already. With another few months on the lees and some more time post-disgorgement, this will no doubt be one of the best Laurent-Perrier vintages for years.

The second flight was a fascinating vertical tasting of Grand SiÃ¨cle blends – past, current and future. All had been disgorged three months prior to our visit in order to facilitate an objective comparison. Fauconnet explained that the philosophy behind the prestige cuvÃ©e Grand SiÃ¨cle is not simply to blend the last three vintages of Laurent-Perrier, but to “create the ultimate vintage… 1 + 1 + 1 = 4.”

Winemaking language though this may be, we could not argue that the first Grand SiÃ¨cle – a blend of 2008, 2007 and 2006 – tasted completely different to the vintages that we tasted above. Even with just three months post-disgorgement, it had a real creaminess and pastry character; this is one to watch when released in years to come.

Before we left, we made sure to ask Fauconnet his thoughts on our favourite topic:Â technological corks. Technological corks guarantee protection against cork taint (TCA), ensuring bottle-to-bottle consistency and have become increasingly popular with champagne producers in recent years. Fauconnet told us that Laurent-Perrier are currently using traditional corks but are conducting trials with technological corks. “Traditional cork is currently best,” he said. “We need more trials on ageing – when we age, we have more porosity. Once we are certain about the ageing potential and elasticity, we will consider changing.” 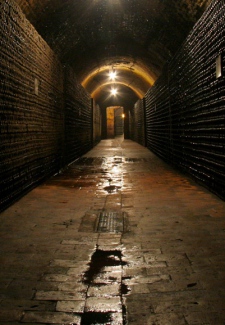 Cool and dark: the underground cellars