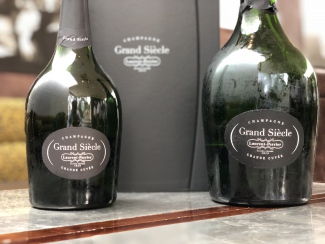 Laurent-Perrier donâ€™t do prestige cuvÃ©es quite like other producers. Rather than the typical superior vintage blend seen elsewhere,Â Laurent-Perrier Grand SiÃ¨cle NVÂ is a non-vintage wine, drawing off Bernard de Nonancourtâ€™s speciality: blending. The idea of Grand SiÃ¨cle was born from a simple observation: that nature would never provide the perfect oenological year, but that thanks to the art of assemblage, Laurent-Perrier could in fact create it.

There are a few rules to understand about this champagne. Grand SiÃ¨cle is:Â 1) Always a blend of three exceptional vintages that perfectly complement each other; 2) Always Chardonnay-dominant; 3) Always a blend of Grand Crus that performed well in the respective vintages (up to a maximum of 11 out of the 17).

One year is chosen for structure, one for finesse and one for freshness, creating a unique combination of power and balance from wines of the very best vintages.Â Although the crus vary blend-by-blend, some villages feature fairly consistently, such as AÃ¿, Bouzy, Le Mesnil-sur-Oger and Tours-sur-Marne.

We recently compared a bottle and magnum of Laurent-Perrier Grand SiÃ¨cle NVÂ and were surprised by the stark difference. Although the bottle was a blend of younger vintages – 2004/2002/1999 vs 2002/1999/1997 – the magnum was packed full of youthful freshness. The magnum had not only slowed down the ageing of the champagne, it had developed some interesting characteristics from extended lees contact, lending it an elegance and complexity not seen in the bottle.

While some of the difference is undoubtedly due to the vintage compositions, the larger bottle format has clearly influenced how Grand SiÃ¨cle NV has evolved. This was a great example of how well magnums – in comparison to bottles – retain all their freshness, lightness and delicacy after time in the glass.