Laurent-Perrier donâ€™t do prestige cuvÃ©es quite like other producers. Rather than the typical superior vintage blend seen elsewhere,Â Grand SiÃ¨cleÂ is a non-vintage wine, drawing off Bernard de Nonancourtâ€™s speciality: blending. Always an assemblage of three vintage years – vintages as declared by Laurent-Perrier only – the blend is a mixture of pure Grand Crus juice, from up to a maximum 11 out of the 18 available. Although the Crus vary blend-by-blend, key Chardonnay villages such as Aize and Le Mesnil-sur-Oger feature consistently.

Laurent-Perrier Grand SiÃ¨cle NV
Vintages: 2004, 2002, 1999 | 55% CH, 45% PN | Dosage: 6 g/l
Quite light colour. Bright lemons and hints of ripe apples on the nose. Nice and fresh on the palate with loads of sherbet and nice balance. Hints of peachiness, some lychee and lees character starting to go creamy and custard with some time in the glass. Nice clean finish and some chalkyness starting to come out more. Quite elegant.

Laurent-Perrier Grand SiÃ¨cle NV
Vintages: 1996, 1995, 1993 | 55% CH, 45% PN | Dosage: 6 g/l
Quite a lot darker, notable age on the nose. Lots of apple richness, custard and pastries. Nice weight of fruit and good ripeness. Loads of peaches and cream, hints of honey and dried fruits. Really quite good, fresh acidity but showing characteristics of age.Â Given time in the glass, the richness comes through, this is likely a perfect drinking time. Quite soft mousse and going a little bit like a still wine. 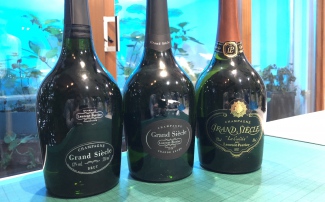 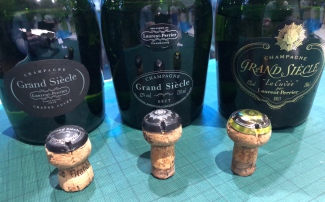