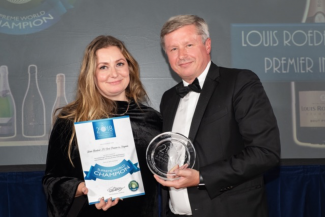 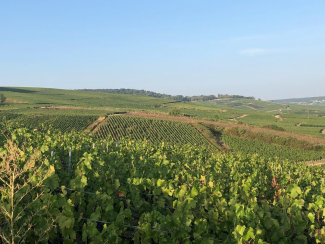 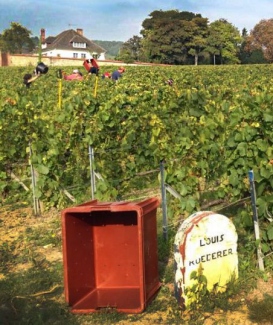 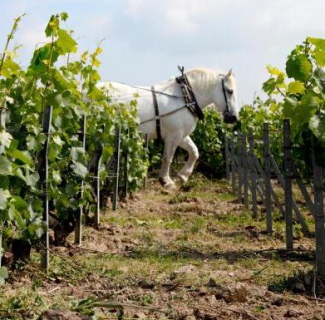 Last year, 125 out of 240 hectares of Roederer’s vineyards were certified biodynamic 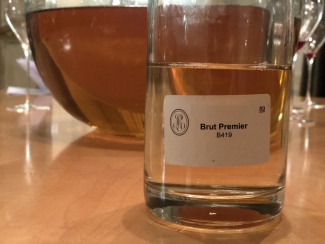 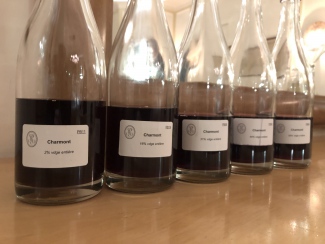 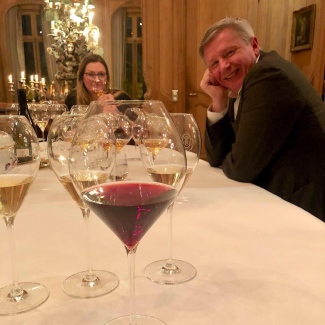 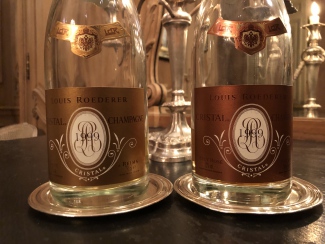 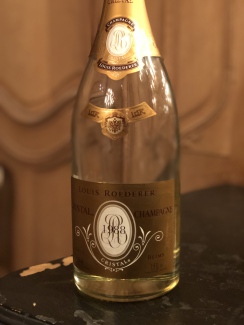 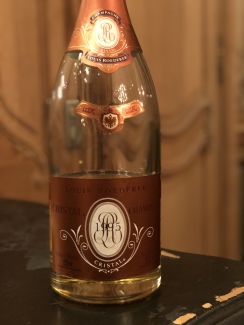 Magnums of Cristal Vinothèque will be available from next year 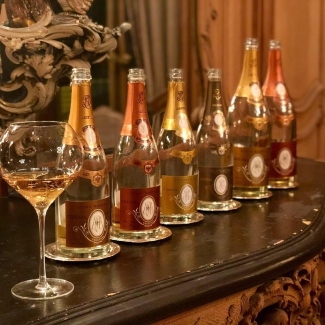 No caption necessary: it doesn’t get better than this!

Louis Roederer’s charismatic leader, Jean-Baptiste Lécaillon, had a heck of a year in 2018. The summer release of Cristal 2008 proved to be the most talked about launch of the decade, and Louis Roederer once again swept the board at the CSWWC, picking up an unprecedented number of trophies. When it became clear that the near-perfect weather conditions experienced during the growing season were going to persist throughout harvest time, it was an idyllic end to a sparkling year.

“We had fun in 2018,” Lécaillon recalled with a smile. “This year has produced the ultimate terroir driven wines – each parcel is really clearly different.” For Roederer, there were two distinct harvests – one in August for the Pinot Noir, and one in September for the Chardonnay. Whilst many producers feared picking too late, Lécaillon displayed characteristic patience in waiting for his preferred ripeness levels, still picking grapes 1-2 weeks later than other houses.

The resulting average alcohol levels reflect his restraint positively: 11.7% for the Chardonnay and 11.4% for the Pinot Noir. The average pH level in the winery this year is an astonishingly low 2.8, similar to the 1988, 1996 and 2008 harvest, and much lower than that of other houses – a result of Roederer’s focus on organic and biodynamic viticulture. The average alcohol and pH figures combined “are even more impressive than 2012”, according to Lécaillon.

Even with such high quality grapes, yields were high: 13,000 kg/ha on average – around 14-15,000 kg/ha for the Chardonnay and 11-12,000 kg/ha for the Pinot Noir. The standard of the juice was such that Lécaillon decided not to do malolactic fermentation on any of the wines. “Every summer with dry conditions, we have strong wines – the winner is the chalk, as it retains the water and expresses the character of the terroir,” he said.

In 2018, all of the 42 Cristal estates (plots that produce grapes/wine destined for the Cristal blends) were bottled, a feat accomplished only twice previously – in 2002 and 2015. “The biggest Cristal year thus far is 2002… this one [2018] will be close.” It wasn’t only the Cristal estates that performed well either. Lécaillon told us that “there are a number of vineyards just outside Cristal classification that are pushing their way in.”

Keen to highlight how each individual parcel had expressed the unique characteristics of the terroir in 2018, Lécaillon had prepared a comprehensive tasting of base wines: more than 30 in total, covering 51 hectares of vines. As Pinot Meunier constitutes just 6 ha out of Roederer’s 240 hectare estate, we tasted Pinot Noir and Chardonnay only, and approached them geographically – starting in the Vallée de la Marne, moving through the Montagne de Reims, and eventually finishing in the Côte des Blancs – with a few of Lécaillon’s favourite experiments thrown in.

The first three Pinot Noirs from the Vallée de la Marne are wines destined for different champagnes: Brut Premier, Brut Rosé and Brut Nature, respectively. The final wine, from Mareuil-sur-Aÿ, was undoubtedly the best of the bunch, described as “super Pinot… almost Burgundy… this is the terroir – high voltage!” by Lécaillon.

The second flight of Pinots presented the results of an experiment Lécaillon had been conducting on the effects of altitude on the vineyard. The wines were from three different plots in Aÿ, each located at different altitude levels with about 70-80m variance between them.

We found there to be more ripeness in the lower altitude wines; a result, Lécaillon believes, of the increased wind protection lower down (wind “shuts the vines down”). Further, the grapes grown higher up each slope displayed more concentration. Lécaillon posited this to be a result of the lower nitrogen levels in the vines further up the slope, as there is less water in the soil.

The next three were from Grand Cru villages in the Montagne de Reims. The first, from a plot called Croisette in the famous village of Verzy, is destined for the Vintage Brut champagne, which, this year, Lécaillon is hoping will be a Blanc de Noirs: “I’ve been aiming to make a Blanc de Noirs but it has never been possible before as I’ve needed the Chardonnay. This year, I’m not sure what the Chardonnay will add.”

This acceptance of letting the terroir express itself was a common theme throughout our discussion. Technically speaking, Lécaillon thinks 2018 should be an easy year for the Chef de Cave. “Don’t try to control it,” he said. “This is the type of vintage where you have to let it be… let it happen. You have no rot, so… no worries!”

The final three Pinot Noirs all originated from Verzenay. The final wine, an oak-fermented vins clairs from the Piscard plot, is “the best of Montagne de Reims this year,” according to Lécaillon. This is at least in some part due to it being biodynamically farmed for so long – it was the first Louis Roederer parcel in the Montagne de Reims to be fully converted to biodynamics, back in 2004.

All three are destined for the Cristal blend which, unsurprisingly, Lécaillon will be producing this year. “Cristal must be fruity, powerful and elegant. We have all three this year.”

The Chardonnays we tasted were from a range of Premier and Grand Cru villages in the Côte des Blancs. The first, from a plot called Noue Tuilières in Chouilly, is the only white wine in contention for the Brut Vintage blend, if Lécaillon decides not to make it a Blanc de Noirs. The best from the first line-up was the fourth wine, a Chardonnay from Volibart (one of the Cristal plots in Le Mesnil-sur-Oger) that has such power, Lécaillon claims he can “always recognise it in a blind tasting.”

We also tasted the results of experiments on wine from Avize. In each pair, both wines were from the same plot and were picked on the same day. In the first pair, one had been fermented with commercial yeast; the other with wild, or indigenous, yeast. In the second pair, one originated from soil farmed organically; the other from soil farmed biodynamically. We tasted both pairs blind.

The winners in each pair were: the wine fermented with wild yeast, and the wine from soil farmed biodynamically. Lécaillon believes that fermenting with wild yeast produces a more complex wine with a more pronounced bouquet, better suited to the current “neoclassical” style of winemaking – a return to more complexity, which was dismissed in the 1960s in favour of wines that were easier to drink.

In terms of biodynamics, Lécaillon has noticed a trend in which biodynamically cultivated soil produces wines that retain freshness (and have lower pH levels) in warmer years, whereas in the cooler years, the organic vineyards seem to produce riper fruit.

Next, we tasted the recently completed 2018 base Brut Premier NV blend. With 58% Pinot Noir and 42% Chardonnay, the white grape content is higher than typical, as Lécaillon believes “the Chardonnay really brings something in 2018”. A quarter of the wines in the blend underwent malolactic fermentation and the reserve wine content this year is less than 25% (15% being the 2017 Brut Premier blend and the remaining 10% a blend of the previous 7 vintages), on account of the strength of the 2018 vintage.

Our final two vins clairs experiments involved wine destined for the Coteaux Champenois (still white and red wine) blends that Lécaillon has been developing for more than a decade. During dinner later that evening, he noted that, “if you really want to showcase the terroir of champagne, it is through still wine.”

The three Chardonnays all originated from a plot named Volibart in the Grand Cru village of Le Mesnil-sur-Oger. The Chardonnay grapes for the Coteaux Champenois white wine are managed differently to those that make champagne. They are pruned to allow just one bunch of grapes to grow per shoot (to enhance the ripeness of the grapes), and they are whole bunch pressed in the winery.

The first was fermented in 320hl stainless steel tanks, which provide the reductive potential; the second in ceramic tanks, which have tiny holes that allow air in (what Lécaillon refers to as “un-oaked breathing”) and bring the core of the fruit; and the third in oak barrels, which give the oxidative qualities and oak characteristics desired.

The five red wines were all from a plot called Charmont in the Premier Cru village of Mareuil-sur-Aÿ. Lécaillon specially planted the one-hectare biodynamic Pinot Noir vineyard in 2002 with a selection of vines from Burgundy, with the intention of one day producing a Coteaux Champenois red wine.

The first wine was produced from almost fully de-stemmed grapes (just 2% whole stem) and each wine thereafter was produced from progressively more whole stem grapes: 16%, 31%, 44%, and 55%. This fascinating experiment showcased the significant difference that small incremental alterations in just one of the vast repertoire of tools available to the winemaker can make. The wines at each extreme were particularly interesting and, when blended, produced an impressive wine of complexity and balance.

Over the course of a resplendent dinner at the family house in Reims, we were spoilt by a quite mesmeric array of Cristal champagnes. After Cristal 2008, which may well be superseded by Cristal 2012 soon, we sampled a preview of the next vinothèque release: Cristal Vinothèque 1999, alongside the previous release: Cristal Vinothèque 1996. Vinothèque 1999, which was aged for 7 years sur latte (horizontal) followed by 7 years sur pointe (upside down), will be released early next year.

Next came a magnum of Cristal 1988, a vintage which, although celebrated as one of the very best today, Lécaillon noted was not considered great for quite some time. “The 1988 vins clairs were not so good when young… they took 20 years to get this good.” It may have taken some time but it was certainly worth waiting for, and to taste a champagne of this standard from magnum is an altogether different experience. Lécaillon informed us that he puts less yeast in the magnums so that the process of fermentation takes longer, creating a unique quality he referred to as “aged reduction”.

Tasting Cristal Vinothèque from magnum (the larger formats will be released next year) is about as good as it gets in champagne. The Roederer winemaking team refer to the vinothèque program as “eternal youth”, and aptly so – despite its 11 years on the lees and 12 years post-disgorgement, Cristal Rosé Vinothèque 1995 from magnum still has so much youthful vivacity; an utterly faultless example of an old champagne that has aged gracefully under perfect storage conditions.