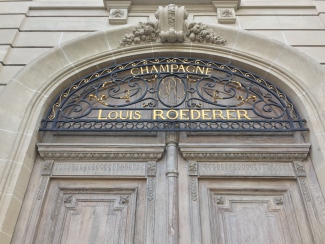 In front of every grand estate lies a grand entrance

We visit Champagne more frequently than most, but for fanatics like us, its still not nearly enough. Hence when we do make the journey we like to pack out our itinerary, filling every available minute with tastings and tours. It should come as no surprise then, that although our latest trip during August bank holiday didn’t see us depart London until early-afternoon on Sunday, our first scheduled meeting was just a few hours later in our home-away-from-home, Reims. Fittingly, it was Jean-Baptiste LÃ©caillon, the godfather of Champagne and Louis Roederer’s leading man who matched our passion and kindly volunteered his time to host a magnificent dinner and tasting.

Greeting us warmly as the sun set over the gardens of the Roederer family mansion, LÃ©caillon could barely contain his excitement for the impending harvest and began with an overview of the 2017 season. Although an unusually cold April brought frost to parts of the region and the continuously wet and warm period from May-July has fostered the growth of botrytis in the Aube, LÃ©caillon is optimistic, likening the year to 2007. Roederer were expecting the arrival of their annual team of more than 600 pickers later that week and LÃ©caillon shared with us their unique approach to this momentous operation. Since sorting tables went out of fashion after WWII, Roederer now use their experienced workers to ensure the best grapes are pressed: “Our pickers sort. Whereas others pay by quantity, we pay by the quality,” he said.

Being the House most closely associated with and committed to biodynamics, you cannot avoid the topic for long when visiting Roederer. “We oxidise all of our Chardonnay,” LÃ©caillon told us. As most of the grapes are now biodynamically grown, the resulting juice tends to be relatively reductive, so oxygen is required to assist development. He uses little to no sulphur at pressing as “it can suppress flavour… we want the soil to shine.” LÃ©caillon is clearly passionate about the positives of biodynamic fruit, reporting enthusiastically on the changing attitude toward acidity and ageing: “Biodynamic methods and lower yields give strong, dry extract; proteins and amino acids.” Where the belief used to be that champagne needed acidity to age well, now that is shifting: “You need extract, and the best way to get that is low yields.” 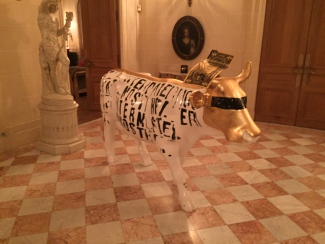 Â  Â  Â  Â  The Roederer cow. If only it produced Cristal…

The first champagne we tasted was the distinctive Brut Nature 2009. Described as a “field blend”, the idea behind this revolutionary wine is to stay as close as possible to the terroir. Produced solely from the soil of CumiÃ¨res, all the grapes are picked on the same day and co-pressed, and the juice is co-fermented and not re-blended. Initially intending it to be an extra brut champagne, LÃ©caillon was so impressed with the maturity and ripeness of this unusual clay area that it became a zero dosage. Difficult to produce as a very warm summer is needed to reach the required ripeness, just two vintages have so far been released – 2006 and 2009 – with 2012 and 2015 to follow.

Louis Roederer Brut Nature 2009
66% PN, 33% CH | Ageing: 5 years on the lees | Dosage: 0 g/l | Jancis Score: 17/20
Has a lovely richness to the nose, loads of peaches and creaminess that goes on and on. Has a hint of nice bitterness and chalkiness on the tongue. A round mouth-feel with a touch of salinity on the end.

We then progressed to our main topic: a comparison of four pairs of Brut Vintage and Cristal from the same year. Introducing the idea that a comparison of vintage and prestige cuvÃ©e is an experiment in style – which originates from terroir – and winemaker vision, LÃ©caillon talked us through some of their differences. Firstly, he attempts to make a Brut Vintage champagne every year, where Cristal is produced just two years out of three. Origin, number of contributing plots, length of ageing, number of disgorgements and Pinot Noir content are all key differences at Roederer. 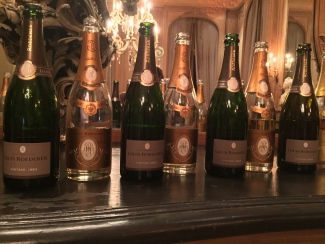 Brut Vintage is typically a blend of 7-10 parcels, is aged for four years on the lees and receives just one disgorgement. LÃ©caillon has gradually been increasing the proportion of Pinot Noir in the vintage blend to as much as 80%. The prestige cuvÃ©e Cristal is ‘estate bottled’, meaning an initial bend using all of the 45 Cristal plots is produced, before LÃ©caillon perfects the assemblage, resulting in a balanced final blend of 32-35 parcels (just two vintages have been produced using all 45 parcels – the outstanding 2002 and highly anticipated 2015). Further, the Cristal grapes are all from mid-slope origin – where favourable weather exposure produces riper fruit – the wine is aged on the lees for two years longer and the House carry out 3-4 disgorgements of each vintage of their prestige cuvÃ©e. 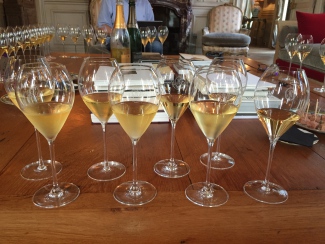 Louis Roederer Brut Vintage 2000
50% PN, 50% CH | Ageing: 4 years on the lees | Dosage: 10 g/lÂ | Jancis Score: 17.5/20
Quite forward, softer acidity. Seems much gentler on the palate, quite ripe and round. Soft and round fruit style but still some grip from the acidity. Long length.

Louis Roederer Cristal 2000
57% PN, 43% CH | Ageing: 5 years on the lees | Dosage: 10 g/lÂ | Jancis Score: 18.5/20
Some creaminess starting to come through on the nose. Bundles of fruit, like dried apricots. Seems less chalky in character. Some of that nice vanilla creaminess on the finish.

Louis Roederer Cristal 1993
60% CH, 40% PN | Ageing: 5 years on the lees | Dosage: 10 g/lÂ | Jancis Score: 18.5/20
Has lots of flinty chalk on the nose. Has started to lose some of the richness of fruit but has a freshness and chalkiness still. Delicious peaches and apricot flavour. 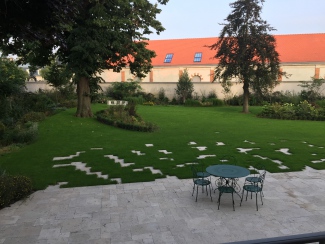 LÃ©caillon had then prepared an insightful workshop centred around a comparison of four blends of Roederer’s famous non-vintage cuvÃ©e with different base vintages. Each creation of Brut Premier is a subtly different blend, with varying grape varietal contributions, reserve wine content and percentage of malolactic fermentation. Typically the reserve wine content is a blend of 7-8 vintages, 7% of which LÃ©caillon described as “really old”. Of the 25% reserves, 18% is wine from the previous year kept in stainless-steel vats. “Reserve wines have to respect the base year,” he added.

As we tasted LÃ©caillon explained his approach to malolactic fermentation, describing it as a year-by-year decision, tailored to the requirements of the vintage. That said, his “malos” are not typical of Champagne, they are “more Burgundian”. As opposed to the normalÂ 20Â°C temperature, they are longer and cooler, carried out atÂ 15Â°C for four months “so as not to touch the aromatic profile of the wine.” 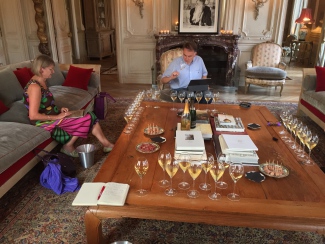 Looking to the future, LÃ©caillon then shared with us some exciting new releases hitting the market soon. First, we tasted the new 2012 vintage releases, due for launch early next year. A vintage that has received much attention already, 2012 is expected to follow in the footsteps of 2002 and 2008. LÃ©caillon talked us through the production of their vintage rosÃ©: long maceration of the Pinot Noir at 4Â°C until the colour is right, then the addition of the Chardonnay juice and fermentation together. Because the colour is inconsistent, Roederer do not make a non-vintage rosÃ©. 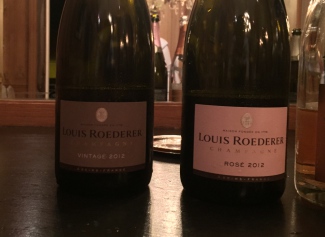 In case he didn’t have our full attention already, LÃ©caillon made certain with his introduction to Cristal 2008. “Potentially better than 2002,” he said, “2008 is the 1996 of our dreams.” He told us that picking commenced a week too early in 1996 and the House should have done more malo, “so we improved on this in 2008.” The bottles we tasted were a trial sample, as LÃ©caillon planned to disgorge the first batch the following month. With 2008 representing the first time a Cristal has been launched at 10 years old and flaunting the lowest ever dosage at 8 g/l, this is set to be a ground-breaking release. Cristal lovers standby – you won’t be able to fill your cellars until Spring 2018. 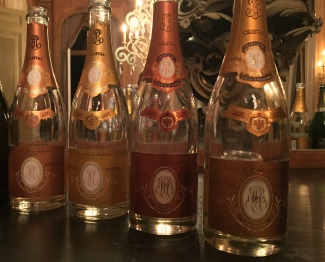 Louis Roederer Cristal 2008
Ageing: 8 years on the lees | Dosage: 8 g/l | Release Date: April 2018Â | Jancis Score: 19.5/20
Amazing freshness, just jumps out of the glass. Has great structure, mouth-feel and a lovely mineral-ness that goes on and on. Bright acidity and fruit explosion. Such youth.

When a winemaker like LÃ©caillon says the next wine to be tasted has been twenty years in the making, you know you’re in for a treat. Introducing: Cristal VinothÃ¨que. This late-release edition is a new feature in the Roederer portfolio, the first vintage of which will be Cristal VinothÃ¨que 1995. Originally released in 2002, less than 1,000 bottles were kept on the lees for a total thirteen years, disgorged with just 7-8 g/l residual sugar added (2 g/l less than the original dosage) and then put back on cork for seven years before release. “Twenty years from vintage is always a nice window,” LÃ©caillon told us, adding that they have been carrying out disgorgement trials every year to pick the optimum time. Cristal VinothÃ¨que 1995 will be launched in November 2017 and VinothÃ¨que will become a regular release – complete with a new, distinctive label – for the main Cristal and Cristal RosÃ© vintages – upcoming releases will be 1996, 1997 and 1999. 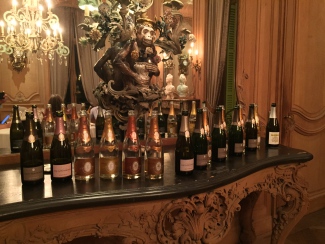 Louis Roederer Cristal VinothÃ¨que RosÃ© 1995
55% PN, 45% CH | Ageing: 13 years on the lees | Disgorged: 2009 | Dosage: 7-8 g/lÂ | Release Date: November 2018Â | Jancis Score: 20/20
Very pale hint of colour. Has that lovely rich red fruit coming through. Roses and subtle aromatics are way up there. Has such lovely elegance and freshness and a length that goes on and on. Seems very subtle but very big.

Drawing our tasting to a close, Champagne’s very own Santa Claus had one last surprise – a bottle of Cristal 1983. As expected, biodynamic methods of farming was a topic we discussed and re-discussed throughout the evening and whilst tasting that stunningly youthful thirty-four year old prestige cuvÃ©e – a champagne produced 100% non-biodynamically – we asked LÃ©caillon if the future goal was to reach 100% biodynamic production. With all the poetic precision we’ve come to expect from the man, he replied simply:Â “I am not a biodynamist, I am not a chemist, my goal is to make my wine taste beautiful.” And in that he succeeds, year upon year.

Each bottle of Louis Roederer Brut Premier NV and Cristal has an ID code on the back label. This can be inputted into a smartphone app to reveal the base year, bottling year and disgorgement dates of that bottle.Â Download the Champagne Louis Roederer App for iOS devices here.