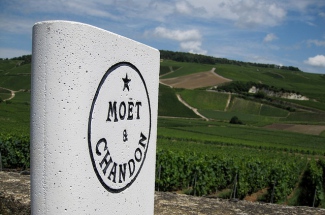 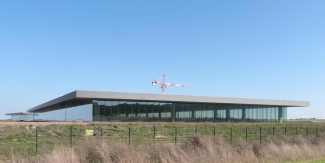 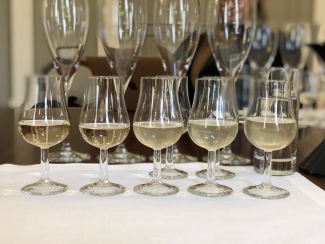 “The 2017 harvest was very challenging,” began Amine Ghanem, winemaker at MoÃ«t & Chandon and host of our vins clairs tasting. The growing seasons started badly for MoÃ«t with spring frosts damaging 25% of the buds in their vineyards. Although continuous warm and hot weather from mid-May to late-July gave them hope of having a good vintage, unexpected hail, rain and high temperatures throughout August caused botrytis to spread.

Due to the ripeness of the grapes, MoÃ«t were forced to start picking much earlier than usual. “Aside from 2003, this was the earliest harvest since the 1950s… our first vineyards were picked on 23rd August,” Ghanem told us. As the botrytis spread, sorting the grapes was especially important in 2017 and many were left on the ground. This, coupled with the 25% loss in springtime, resulted in a very low yield.

MoÃ«t approach the tasting and blending of vins clairs quite differently to other houses. Rather than blend by village, they blend by quality. To achieve this, they use a system that has been in place at MoÃ«t since the 1960s. First, more than ten winemakers taste all of the base wines (over 800) and rate them on an ABC scale. Within the A rating, there is also the option of A+ and A++ grades for particularly impressive wines.

Those rated C are immediately discarded, whilst the A’s and B’s go forward for re-tasting, after which more may be rejected.Â Eventually, the initial 800 base wines are reduced to around 500, which are then used in the blending process (around 120 wines are used in the MoÃ«t & Chandon ImpÃ©rial NV blend alone). In 2017 however, 650 different base wines entered the first round of tasting. Ghanem explained that this rating system is relative to the vintage and is used to compare between wines from that year only – i.e. an A+ rated wine from 2002 would likely be much better than an A+ rated wine from 2017.

We started with Pinot Meunier, a grape variety with unique prominence in MoÃ«t’s non-vintage champagne. “In 2017, Pinot Meunier was the most damaged grape variety,” Ghanem said. “It wasn’t really ripe, there was high acidity and lots of dusty aromas,” he added. Where botrytis was found, the grapes were sorted and the batches were fermented separately and treated with bentonite, a fining agent which cleanses the wine. Although successful in isolating the Pinot Meunier with botrytis character, not all of the wines could be saved and many were still discarded.Â “We will use the Pinot Meunier as soon as possible… it will grow tired with time,” Ghanem told us.

The Pinot Noir was also quite damaged last year, although with some sorting and discarding there were some good batches – those from the south fared particularly well. The first one we tastedÂ was from the Aube, about 50km south of Reims. With a balanced and vibrant acidity,Â Ghanem described it as “easy to use” and indeed it has been put into the 2017 Imperial NV blend. “Our strategy this year is to not touch the reserve wines. We will try to use up the 2017s, as they will mature early,” he said.

The second Pinot Noir we tasted was from the VallÃ©e de la Marne. Very pale, almost like a Chardonnay in colour, this had incredibly complex aromas – a consequence of careful selection in the vineyards, according to Ghanem. “This would be an A/A+ wine,” he told us. Contrary to their strategy, this Pinot Noir – being one of the best of the year – will likely end up in the reserves. “We need some reserves from 2017… they are the first priority,” Ghanem added.

Next, we moved onto the Chardonnay vins clairs. Although the acidity in the white grapes was much lower than in typical vintages, Ghanem said there were “a few good surprises”. The first we tasted contained mainly Premier Cru vineyards from theÂ CÃ´te de SÃ©zanne and was very expressive on the nose, almost quite flashy. The second, mainly Grand Crus from theÂ CÃ´te des Blancs, was much more muted and conservative. Where the other base wines are open now and need to be used, Ghanem noted that the second Chardonnay had intensity and structure. “This is much better for ageing… it could have real potential,” he added.

The winemaking team had recently finished the 2017 base vintage MoÃ«t & Chandon ImpÃ©rial NVÂ blend, which was due to be bottled the following week. Due to its unprecedented production volume (over 20 million bottles are made every year), Brut ImpÃ©rial must be bottled in stages and is therefore blended three times throughout the year. Consequently, each blend is slightly different – the one we tasted was the first of the year.

Typically, the first blend will have more reserve wines from the previous vintages and less of the current vintage, to allow the younger wines from the current vintage to develop some maturity. However, with the 2017 base wines maturing early and showing less ageing potential, the first Brut ImpÃ©rial blend had much more content from 2017 than usual. “The first blend has about 30% reserve wines, the second and third will have more,” Ghanem said. We thought it was showing quite well, lots of clean and fresh green fruit and a pleasant purity. “We were searching for brightness and we ended up going for clean fruits. I can imagine it as a fresh fruit ImpÃ©rial,” Ghanem added. 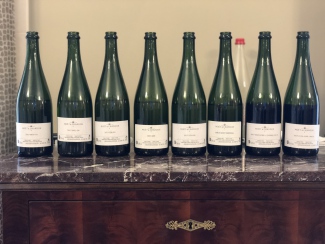 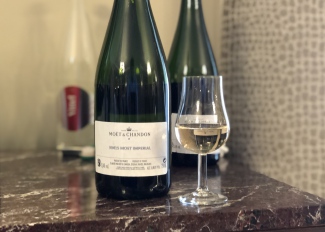 The first blend of 2017 base vintage Brut ImpÃ©rial 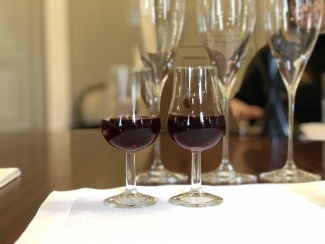 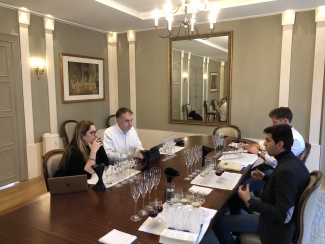 To finish our still wine tasting, we sampled two red wines produced using two very different winemaking techniques: thermovinification and maceration. Thermovinification involves heatingÂ grapes andÂ must to near-boiling temperatures prior to fermentation. ThisÂ promotes the rapid extraction of colour and tannins, creating an intensely aromatic and coloured juice. Although it has been around for decades, thermovinification has recently surfaced in Champagne – MoÃ«t themselves only began experimenting in 2015. The wine itself had an intriguing nose of red roses and banana and Ghanem revealed it was rated B.

The second red wine had undergone the standard 8-10 day maceration process to extract the coloured juice from the grape skin. “The red grapes from the CÃ´te des Bar were of good quality and quantity… the sunshine of the year,” Ghanem said. Due to the intensity of the fruit, MoÃ«t used a large amount of maceration and less red wines in this year’s RosÃ© Imperial NV to get the same colour.

Summarising the vintage, Ghanem said it was difficult but a good learning experience for the younger winemakers. “The older members of the winemaking team had the experience to keep the youngsters calm,” he added with a smile. Given the changing climate in Champagne, Ghanem believes unpredictable vintages like 2017 may become more frequent, although he was quick to acknowledge that MoÃ«t – with the largest amount of land and reserve wines – could survive even the most difficult low-yield and low-quality years. “Having 1,200 hectares is our saviour,” he said.

“We are also the only laboratory to analyse so precisely,” Ghanem told us. By way of an example, the latest scientific innovation at MoÃ«t & Chandon is to use thermal imagery to identify signs of rot and maturation in the grapes. This way, they can sort the grapes into A and B graded parcels before even producing or tasting the wine. Despite all their impressive technology, there will still be no vintage MoÃ«t in 2017. “Vintage is just 5% of our production… there is no need to force it if the quality is not there.”

“Our vintage champagnes are produced from all A+ rated wines,” Ghanem told us. Comparing the vintages, he commented that 2009 and 2002 were very similar in levels of ripeness, the only difference being that Pinot Noir was the signature of 2009, whereas 2002 was more Chardonnay driven. The philosophy behind the Grand Vintage Collection is to leave them ageing on the lees for twice as long as the original release.

The Grand Vintage Collection 1990 we tasted was from magnum (what Chef de Cave BenÃ´it Gouez believes should be the standard size – he, only half-jokingly, refers to 75cl bottles as ‘half-bottles’) and it had an incredibly smoky and leathery texture, not unlike a whisky or cognac. “It conjures an image of an old man with a cigar,” fellow guest Essi Avellan MW said.

Given that Ghanem is the winemaker in charge of cork quality at MoÃ«t, we grasped the opportunity to discuss our favourite champagne topic: technological corks. As technological corks guarantee protection against cork taint (TCA) and ensure bottle-to-bottle consistency, they have become more and more popular in Champagne. “We have no doubts that technological corks completely remove cork taint. Since 2015, we have tested 6,000 bottles [closed with technological cork] and found just one incidence of taint – likely a defect,” Ghanem said.

Although Diam Mytik are the most well-known brand of sparkling wine technological cork, there are others. Just two years ago, around 80% of MoÃ«t bottles were being stoppered with Diam Mytik, however this figure is now already more like 50%. They are trialling two other brands of cork with the future intention of each brand supplying a third of their cork requirements.

That said, Ghanem was keen to stress that natural corks have not been written off completely. “We are working with a supplier to create a natural cork that is 100% taint free. We are not dogmatic… if they can be created, we will go back to them,” he said. Whilst many believe that Diam Mytik is the least permeable cork, this has only been proven up to a certain number of years. “There is evidence that Mytik may be more permeable than other natural corks. The data we have shows that Mytik is less permeable up to 7-8 years… beyond that, we do not yet know,” Ghanem concluded. 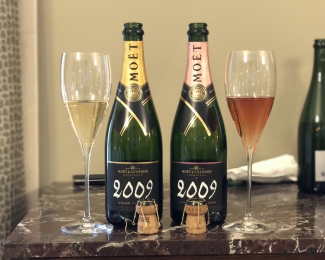 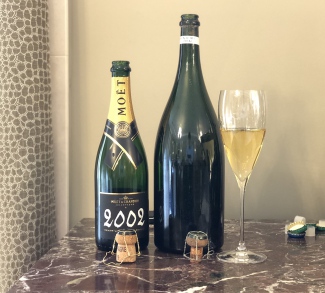