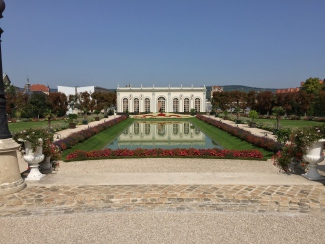 Being one of the world’s most recognised luxury brands and the most famous producer in Champagne, we’ve come to expect a meticulous level of majesty from MoÃ«t & Chandon:Â perfunctory is simply not a word in their dictionary. It came as no surprise then, that our scheduled “working lunch” at MoÃ«t was in fact a delectable four-course meal at the stunning Trianon Residence, prepared by Dom PÃ©rignon’s new in-house chef, Marco Fadiga.

We dined with Richard Geoffroy, Chef de Cave at Dom PÃ©rignon since 1990. A Champagne veteran born in the heart of Vertus, he lives and breathes effervescence. As we ate, discussion turned to the purpose of our visit – research for the upcoming Prestige CuvÃ©e vs Vintage tasting with Jancis Robinson MW – Â and Geoffroy shared his thoughts on the “overlooked” vintage category. “Vintage champagne deserves more recognition,” he told us. Whilst we in the trade spent our time obsessing over the different vintages and their many nuances, the consumer seems relatively uninterested: vintage accounts for just 10% of total Champagne production – a figure that hasn’t changed for decades. Yes, they come with a premium and will always remain a rarity, but as Geoffroy says: “Vintage champagne is very special and is made to be enjoyed.”

That said, Geoffroy is renowned for his unique approach to vintage champagne production. Whereas some producers might make their prestige cuvÃ©es just twice a decade following a consistent style, Geoffroy’s vision is broader. “Making one good vintage is easy, but making lots is a challenge,” he said quite seriously, and without a hint of arrogance. Annual production is a task he embraces, attempting to make a vintage every year, each one a reinvention, expressing the unique characteristic of that particular season.Â This is clearly something integral to the winemaking philosophy atÂ MoÃ«t & ChandonÂ and a point reiterated throughout the afternoon. Geoffroy later commented: “You can either wait for the rare, high-acidity ‘classic’ vintage, or try to make the best of ‘modern’ vintages.” Acknowledging that some of the greatest champagnes in history were made in warm, ripe, low-acidity years, Geoffory summarised his belief succinctly: “Winemakers are meant to make wine.” 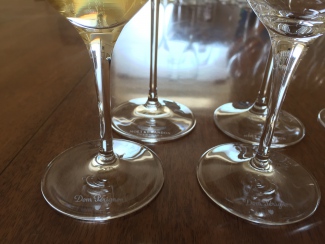 And this winemaker does just that and he does it very well. To showcase this point, Geoffroy led us to a large tasting room where we met with BenoÃ®t Gouez, head winemaker of MoÃ«t & Chandon. The knowledgable duo had kindly prepared a comparitive tasting of eight different vintages of MoÃ«t (four from magnum) and Dom PÃ©rignon (all from bottle). Introducing the MoÃ«t range, Gouez began with a familiar message: “Vintage is not about being consistent, it’s about expressing the year.” He explained that his vintage champagne has evolved from ‘MoÃ«t vintage’ to ‘vintage by MoÃ«t’. A subtle difference, but a key one – MoÃ«t Grand Vintage is no longer an amped-up Brut ImpÃ©rial NV but rather has it own blending ingredients and methods.

As we tasted the range, both Geoffroy and Gouez elaborated on the winemaking procedure of their respective wines and the characteristics of the vintages they found interesting. WhilstÂ they ensured us thatÂ “estate fruit is the core” of both Dom PÃ©rignon and Grand Vintage, we were told that they are made in such high quantities that it would be impossible to depend exclusively on MoÃ«t’s own vineyards. Gouez arrived at MoÃ«t & Chandon in 2005 and since then has been reducing the dosage in the entire range quite considerably – resulting in a more sophisticated style of champagne.

Of the newly releasedÂ Dom PÃ©rignon 2009, Geoffroy said he had “sleepless nights” wondering whether he should have made it. Extremely ample and voluminous, many told him it was simply “too big”, but he believes his bravery was rewarded. Of 2006, he admitted he released too early but added this was his “most challenging vintage.” He described 2004 as a “no-brainer” and 2003 as the introduction of phenolics. Only discussed in the last 15 years, Geoffroy describes phenolics as “acidity, generating freshness” and says he now looks for a bitterness that is fixed.

Interestingly, the Dom PÃ©rignon 2002Â we tasted was not the original release, but was disgorged earlier this year and will become the next P2. A groundbreaking champagne initially, this has now had fourteen years on the lees and is incredibly exciting and tense. Commenting on PlÃ©nitude 2 releases, Geoffroy revealed that P2 2003 may come before P2 2002: “Another three years post-disgorgement will make a huge difference.” 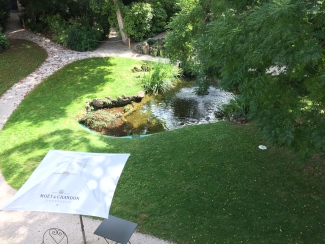 One of several hidden gardens in the MoÃ«t estate

To finish our tasting, Gouez returned after mysteriously disappearing to disgorge bottles of MoÃ«t and Dom PÃ©rignon from 1996 and 1995. With now more than twenty years ageing on the lees, the Dom PÃ©rignon’s will eventually become the P3 releases, although having just been disgorged, the bottles we tasted had zero dosage.

Summarily comparing the two different brands, Geoffroy happily accepts that many consumers prefer MoÃ«t & Chandon to Dom PÃ©rignon. “That’s fine! MoÃ«t has a much more generous, giving style whereas Dom PÃ©rignon is more complex and subdued. They are made as much different champagnes.” 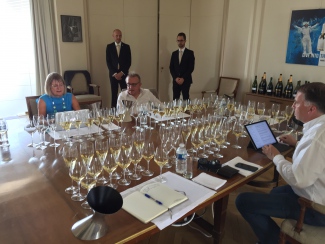 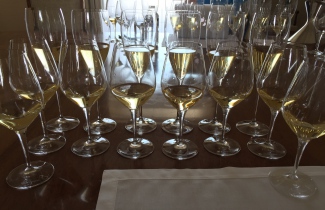 Dom PÃ©rignon 2002
51% PN, 49% CH | Ageing: 14 years on the lees | Disgorged: Early 2017 | Dosage: 6 g/lÂ | Jancis Score: 19/20
Has some lees character on the nose that starts to become really exciting on the palate. Highest glycerol content ever in juice. This is not original release, this is the P2 on its way to its release. So tension and freshness seem to be way up there. 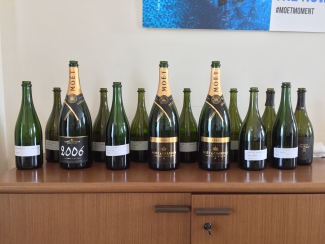