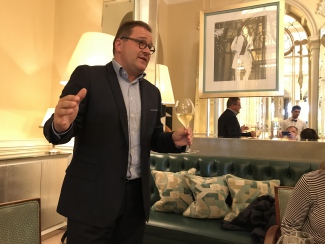 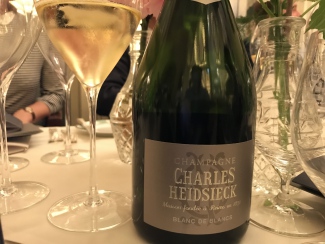 Leroux began by highlighting the pioneering history of Charles Heidsieck in Champagne. “We bought up reserve wine content [in Brut RÃ©serve NV] to 40% in 1976/77 and were the first house to put the cellaring date on the front label of bottles in the 1990s.” he said. They were also amongst the first to focus solely on Chardonnay. “We started making a Blanc de Blancs in 1947… only Salon had done it previously,” Leroux commented. This latest release then, is a tribute to the legacy of Chardonnay at Charles Heidsieck.

Indeed, the emphasis on Chardonnay was one of the things that attracted Cyril Brun to join the house in 2015. “I was born in AÃ¿, so Chardonnay is exotic,” Brun smiled. Joking aside, he acknowledged that the prestige cuvÃ©eÂ Blanc des MillÃ©naires, a Blanc de Blancs champagne, was a significant pull factor in his decision to join. “When the idea of a non-vintage Blanc de Blancs came around… to go back to doing what Charles used to do… it seemed like a good idea,” Brun added.

Charles Heidseck Blanc de Blancs NVÂ is composed of wine from around ten different villages, including Charles Heidsieck favourites Montgueux, Oger, TrÃ©pail, Vertus and Villers-Marmery. Of these, Montgueux is the most expensive and brings the silky and creamy texture to the blend. Villers-Marmery can add a certain iodine element, whilst Vertus adds a hint of salty character and some chalk.

The first base vintage is 2012, which constitutes 80% of the blend. The 20% reserve wine content is a blend of wines back to 2007.Â Very different to the richly mature Blanc des MillÃ©naires,Â Blanc de Blancs NV is all about freshness of youth, more a Chardonnay expression of theÂ Brut RÃ©serve NV, than a mini-Blanc des MillÃ©naires. The production volume of this first release is tiny and will be initially targeted towards the restaurant trade. The next base vintage will be 2016.

We also tasted the current releases of the vintage range, as they have all recently transitioned to new vintages. Since we last tasted theÂ Brut MillÃ©sime 2006 withÂ Brun in March 2018, it appears to have evolved quite quickly. Brun pointed out that this is a characteristic of the vintage, not the champagne. “A vintage is the incarnation of one year,” he said.

TheÂ RosÃ© MillÃ©sime 2005Â on the other hand, is still a true youngster. With huge concentration and phenolics quite typical for wine from AÃ¿ and Bouzy, Brun describes 2005 as both a “bomb” and a “monster”. It is now tasting quite robust, becoming more approachable and should age well for the next 15-20 years.

As we tasted the final champagne,Â  Brun expressed his wish for another year like 2004. “We need a double quantity harvest like 2004 as 2017 was poor,” he said. Talking of 2018, he believes the cold winter just gone won’t affect the quantity as the buds were already set last summer, but the cold might delay bud break and flowering. He noted that the difficult season in 2003 gave the vines more energy and reserve of growth, resulting in the large harvest of 2004. Fingers crossed history repeats itself. 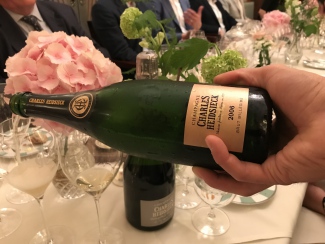 The rich and mature Brut MillÃ©sime 2006