The consensus in Champagne is that vintages dominated by exceptionally hot weather will generally produce sub-standard wines unsuitable for long-term ageing. In France, the 2003 growing season was the embodiment of this stereotype. Often referred to as the ‘heat-wave’ vintage, alcohol levels were elevated and ripeness was pronounced, producing very concentrated wines.

Not only was 2003 remarkably hot, it was a year of extremes. Two destructive frosts in April and summertime hail storms more than halved the potential yields, with very small crops harvested in all regions of Champagne. Consequently, it is remembered as a controversial year: most producers chose not to produce vintage wines and those that were made are considered interesting expressions of an unusual year, but not champagnes to be kept in the cellar for serious ageing.

However, a new limited edition release from Champagne Palmer & Co has set about to challenge that notion. Palmer & Co Grands Terroirs 2003 is a blend of specific sites in the appellation that surprised managing director Remi Vervier and his team with their youthful and fresh characteristics.

“It was a very challenging year with concentrated wines and tiny crops, so we produced a vintage in tiny quantities and in magnums only,” Vervier told us during a visit to the house in Reims last week. Just 1,800 magnums were made and 1,703 are only now being released onto the market.

Veriver explained that the house anticipated the magnums to be ready for release in 2014. However, when the oenology team tasted it 5 years ago, the “explosive wine” they expected to find was instead “very closed and not ready to drink.” Over the following two years, they monitored its progression closely, and were continually surprised by its prowess in blind tastings and the intensity and complexity it gradually developed.

Palmer therefore made the decision in 2016 to honour this unusual creation with a special edition release, named Grands Terroirs as a tribute to the unique east-facing vineyards in the Montagne de Reims that the majority of the grapes hailed from: TrÃ©pail and Villers-Marmery for the Chardonnay, and Mailly and Verzenay for the Pinot Noir. “It is thanks to the special areas of the Montagne de Reims that we can have wines that are so fresh and expressive in such a difficult year,” Vervier said.

Further enhancing its unexpected ageing capability is the fact it was produced only in magnums, a larger format which has a knack for decelerating the champagne ageing process due to the fact that a larger quantity of wine is exposed to the same amount of oxygen that inevitably transfers into the bottle.

“We only have this wine today thanks to these grands terroirs,” Vervier concluded. 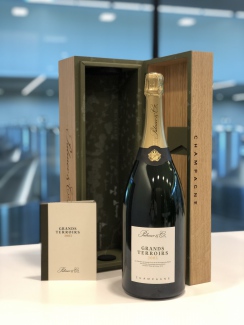 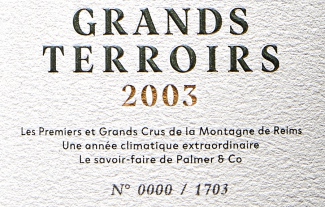 Each magnum is individually numbered 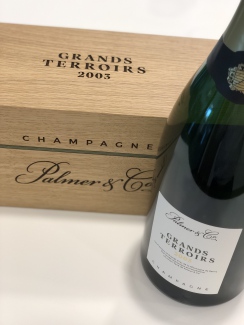 Just 1,703 magnums have been released 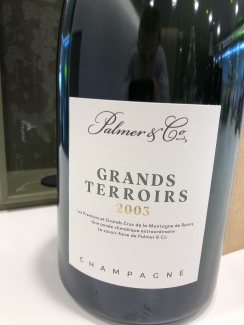 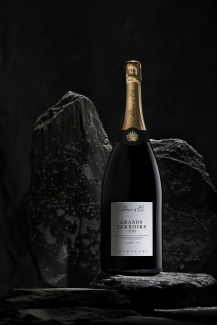 Grands Terroirs was produced only in magnums, which notoriously decelerate the ageing process