Yesterday, Bollinger were at The Ledbury in London to launch their latest vintage champagne, La Grande AnnÃ©e 2008. Considered one of, if not the, best vintage of the century, the recent spate of 2008 champagne releases have all been received with considerable fanfare, and Bollinger’s contribution is no exception.

Produced exclusively in outstanding years, La Grande AnnÃ©e is no stranger to stardom, featuring in the 2006 James Bond movie, Casino Royale. Entirely fermented in oak barrel, the 2008 vintage was produced from just fourteen crus – 91% of which are Grand Cru rated, the remaining 9% Premier Cru – including AÃ¿ and Verzenay for the Pinot Noir, and Avize, Cramant and Oger for the Chardonnay.

The 2008 vintage was a great success for Bollinger.Â After a rainy but mild winter without any prolonged cold spells, spring arrived with only some very localised frosts, which caused little harm to the vineyards. The spring to autumn weather was bright with sunny spells and the long, hot days and cool nights during September ensured the grapes developed excellent acidity during the harvest period. Echoing the vintage’s high regard all over the region, Bollinger consider 2008 to be one of their best ever years.

Chef de Cave Gilles DescÃ´tes explained: “In 2008 at Bollinger we could have started picking in Ay on the 6th September, but because we had warm days and cold nights we decided to wait. We started harvest on the 18th September, the cold nights and warm days allowing long and slow ripening which gave flavour development in the grapes. We finished on 1st October with all the grapes coming into the press in incredibly healthy condition.”

La Grande AnnÃ©e 2008 is the first vintage to be sold in the new ‘1846 bottle’, complete with stylish new label. The curvaceous bottle design replicates the shape of a magnum, with a narrower neck and wider base, and is named after a similarly shaped bottle recently discovered in the Bollinger cellars, which dates back to 1846. The purpose is not just aesthetic either: the ‘mini-magnum’ shaped bottle slows down oxygen exchange, producing a slightly more complex wine with longer ageing potential.

Luckily, Bollinger presented La Grande AnnÃ©e 2008 yesterday in all three formats – 75cl bottle, 1.5L magnum and 3L jeroboam – allowing us to assess the differing effects of bottle format even more accurately, now that they are designed as replicas. The magnum was our favourite, with its reductive, smoky character teasing both the nose and palate. The Jeroboam, although more than drinkable currently, is still so very young and underdeveloped – give this one some time, as it is packed to the brim with ageing potential.

And don’t just take our word for it – Essi Avellan MW has already scored the bottle 97/100 (the magnum and jeroboam received 98 and 99 points, respectively), commenting: “Ripe and fruity yet at the same time elegant nose with stylish restraint promising longevity. Golden delicious apples, biscuits and lemon alongside complex spicy tones. Lovely creaminess on the fresh and linear palate that finishes with a bite of mineral salinity. The tension and playfulness on the palate is its most attractive feature” – her full review can be read here.

The only downside to La Grande AnnÃ©e 2008 is its potential shortage. Due to the financial collapse in 2008, Bollinger produced a reduced quantity of La Grande AnnÃ©e 2008. Compounded by the fact that the house have no doubt kept a considerable amount in the cellars to be released as Bollinger R.D. 2008 in years to come, this one may not be around as look as we would like. 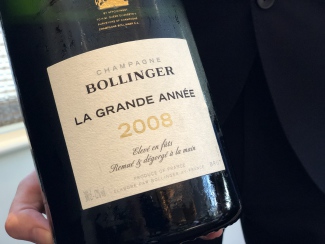 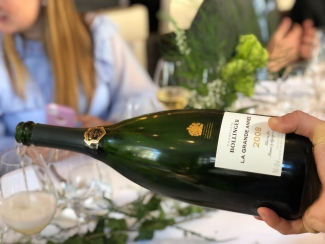 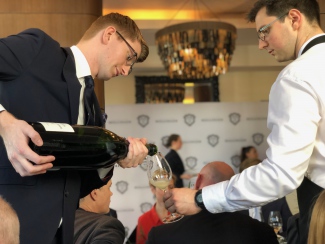 LGA 2008 being poured from 3L Jeroboam 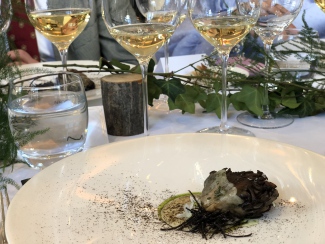 Food pairings from The Ledbury were perfect