2012 was a smaller harvest than 2008 and some will be held back for R.D 2012 which will be at least five years away. This is the second La Grande Année that is in the new ‘1846’ bottle shape, referred to as a ‘small magnum’ since it has a narrower neck and a wider base; first introduced with Bollinger Special Cuvee NV a few years ago.

The launch event was held at St. John Restaurant in Smithfield and excitement in the room was high due to the opportunity to taste both Blanc La Grande Année 2012 and also La Grande Année Rosé 2012, not to be released until later in the year, along with a superb menu including the famous St. John Guinea Fowl Pie to compliment the Rosé 2012.

Adverse weather throughout the winter and spring of 2012 resulted in lower than average yields, a late summer rescued the grapes producing great concentration and purity. 2012 has received a lot less hype than 2008, however Essi Avellan MW gave the vintages, on release, the same score of 95-97/100 mentioning that the 2012 might mature slightly earlier than 2008.

La Grande Année 2012 – 95-97/100 – Feb 2020
“The 2012 marks the second La Grande Année vintage bottled in the new bottle shape, whose narrow neck is to induce something similar to the magnum effect. Upon launch, the 2012 has 10 months of post-disgorgement time and the wine is showing elegantly restrained and youthful. On the nose the old-oak character is less prominent than in most other Bollinger vintages and the deliberate oxidation is well under control and in a supporting role. The fine, cool and pure fruitiness is at the fore with lovely spicy and nutty notes supporting. Lemony fruitiness with yellow apple and ripe apricot as well as some tropical fruit emerging in the glass. On the palate the key word is balance, the wine is very complete with freshness, intensity, refined tension and chalky salinity. 8g/l dosage is spot on. Still young but has the building blocks of longevity. For me similar in quality to the 2008 but this will come around and peak earlier. ”

La Grande Année 2008 – 95-97/100 – March 2019
“Ripe fruity yet at the same time elegant nose with stylish restraint promising longevity. Golden delicious apples, biscuits and lemon alongside complex spicy tones. Lovely creaminess on the fresh and linear palate that finishes with a bite of mineral salinity. The tension and playfulness on the palate is its most attractive feature. Long and intense, yet light-weight palate finishing fresh with its 8g/l dosage (November 2018 disgorgement). Really satisfying already in the 75cl bottle, which benefits from the new bottle shape with narrower neck for “magnum effect”. But as always at Bollinger, the larger formats just sing bringing an attractive, complementary reductive toasty complexity. And of course the mousses in both magnum (96p->98p) and jeroboam (97p -> 99p) are ultra fine. This should have been a bigger quantity vintage for Bollinger and probably plenty will be held back as R.D. So prepare for a shortage of it.”

Richard Juhlin 95/100
“I love the magical moment when I get the chance, as the first journalist, to lighten the cork of the latest vintage of Bollinger La Grande Année…….The wine is made from 21 villages with Aÿ and Verzenay in the driver’s seat backed by elegance from Le Mesnil-sur-Oger and Oiry.  The wine is characterized by vitality and energy more than depth at present. The colour has a brilliant golden glow and the mousse is almost panting in its resilient youthfulness. The scent is beautifully house typical, dominated by apricot, almond, hazelnut and a smoky sophisticated intensity as from a newly lit outdoor fire. The attack is stunningly intense and the weight in the oral cavity leaves nothing left to wish for. Resilient energy and fullness are combined with greatness. Anyone who has patience will be rewarded with truffled flavour layers,chocolate saturated complexity and added exoticism of honeysuckle in the wine’s bouquet.”

Limited quantities of La Grande Année Rose 2005 and 2007 are still available if you cannot wait until later in the year. 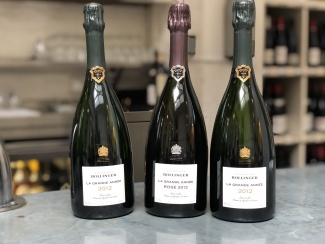 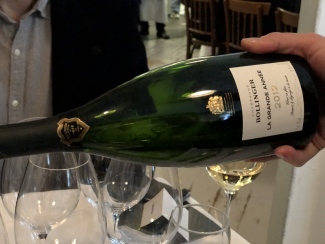 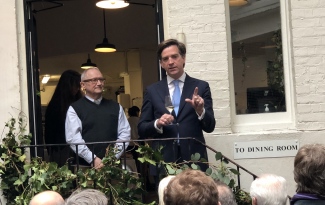 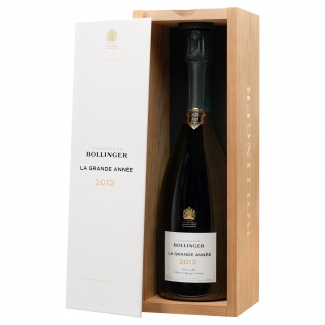