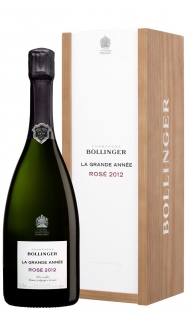 Bollinger La Grande Annee Rose 2012 has been released five months after the Blanc La Grande Annee 2012, it sees the addition of Red Wine (5%) from the Cote Aux Enfants, Bollinger’s famous red wine vineyard. Vinification takes place exclusively in small old oak barrels (20 years old on average), maintained in Bollinger’s cooperage, of which there are almost 3,500. Riddling and disgorging are performed entirely by hand, and take place after ageing on the lees in bottles with natural corks. The 2012 weather has been hallmarked by many as very challenging but has created some stunning Champagne. Relatively low yields due to various weather conditions throughout the year. The winter months brought some frosts and hail which damaged the early stages of bud burst. August and September were very warm and this helped rescue and give the grapes a stunning maturity. Bollinger La Grande Annee Rose 2012 is the first Vintage Rosé that is in the new ‘1846’ bottle shape, referred to as a ‘small magnum’ since it has a narrower neck and a wider base; first introduced with Bollinger Special Cuvee NV a few years ago and is now seen across the range.

Since Champagne is very northerly and it isn’t a red wine area, there are only certain locations that can produce full bodied red and Aÿ is one of the best villages for red wines. Bollinger own a legendary 4 hectare steep hillside vineyard Côte aux Enfants. Here the grapes are on a chalky rich soil exposed South-east and tilted towards the sun at 30 degrees. Its an incredible vineyard with low yields of very concentrated and spicy fruit. You can even buy the wine as a still wine and in the best years it gets close to being Burgundian. The red wine element in rose champagne will typically mean the champagnes will often age longer than their blanc counterparts; the red wine elements help protect the champagne from oxidation. The grapes used from Cote Aux Enfants in Bollinger La Grande Annee Rose 2012 were harvested on 22nd and 23rd September 2012. 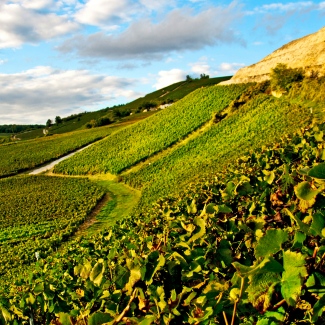 Some say that children used to go there to take shoots from the vines. Others say that only children were agile enough to work on the slope. Another story has it that it was the women, toiling endlessly to recover heavy baskets of soil washed away in bad weather, who named the hillside “la Côte aux Enfers”, the hillside from hell. But everybody agrees that this plot produces one of the finest Pinot Noirs in Champagne. Some even call it “the Romanée- Conti of Champagne” – a reference to the prestigious appellation of the Bourgogne region. Bollinger produces an exceptional red from the best grapes of La Côte aux Enfants.

Essi Avellan MW 96-98/100
“At this point of youthfulness the pink colour is rather rich and bright. Lovely clean and fruit-forward nose with fresh red berry aromas mixing with spice and orange notes. Quite shyly evolved with much more to surface on the complexity front. Today there is attractive exuberant fruitiness and perfect creamy freshness. Promising palate with power and persistence where an overall harmony enhances the feeling of sophistication.”

Richard Juhlin 95/100
“For the first time ever, I enjoyed the rosé edition of La Grande Année in January 2020. Mostly, LGAR has felt a little heavier than the white version. This time there is an extremely charming uplifting juiciness and fruit that makes the wine a winner. My thoughts and comparisons guides me towards historical bottles with their wonderful notes of orange fudge, nougat and white chocolate. The colour is also slightly brighter than before and the added wine from one of the foremost parcels in Aÿ, Côte aux Enfants, gives a delicious elegance and silky texture. Although the base wine is identical to LGA and only 5% red wine has been added, they are as different as night and day. The Rosé has a creaminess and charm that appeals at the moment. It is also exciting to see that the rosé has a strong element of red citrus, with blood orange and red grapefruit as clear components of the harmonic symphony. It will be an exciting journey to follow both LGA and LGAR into the future, but if I recommend a storage of at least five years in my own cellar for LGA, I will start drinking my rosé bottles with great pleasure next weekend.”

Magnums will be released in September.