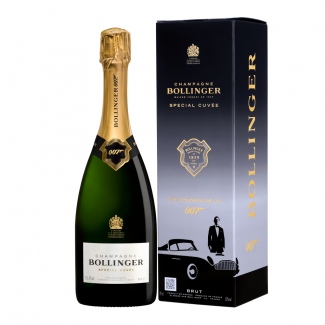 In celebration of over 40 years of partnership as the Official Champagne of 007 and the upcoming film No Time To Die, Champagne Bollinger has produced a limited edition gift box that brings together three icons: Bollinger’s signature Special Cuvée, the Aston Martin DB5 and James Bond.

The colourway of the gift box echoes the silver birch finish of the DB5. The Bollinger lettering and logos are depicted in gold and the iconic Special Cuvée bottle has been adapted to feature a black and gold neck collar with a 007 blazon.

The original limited edition released in November 2019 for the film was the Bollinger 007 Limited Edition 2011, now sold out, paying tribute to their shared heritage and with the 25th instalment of the James Bond series, the House created a limited edition wine dedicated to 007, with a 2011 vintage inspired by the world of Bond. The jet-black 75cl bottle is adorned with the number “25”, formed from the titles of the previous films, which are similarly etched on the glass of the wooden box. We now have this available in magnum in limited quantities. 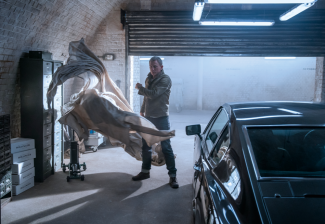 James Bond – No Time To Die

Bollinger’s Special Cuvée champagne is representative of their vineyards. With 60% of the House’s vineyards producing Pinot Noir, this grape is the predominate variety in the Special Cuvée blend. Bollinger allow their non-vintage to mature for three years, which is twice as long as required, as they believe that great champagne needs time to develop its full character. In 1911, Georges Bollinger’s British agent gave him the idea for the name Special Cuvée – “special” written the English way, without an accent. He thought the French expression “brut sans année” was no match for such a subtle champagne.

A golden colour with a beautifully fine mousse. The nose is aromatic and complex with ripe fruit and spicy aromas. On the palate, rich apple and peach notes burst through. Hints of brioche and fresh walnut linger on the lasting finish to enhance this powerful Special Cuvée.