Introducing only the sixth release of Blanc des Millenaires Blanc de Blancs since 1983, 2006 is the latest release, thus spoiling the Charles fanatics amongst us with two releases in two years having had to wait 12 years for 2004 from 1995. Charles Heidsieck’s prestige cuvée is a blend of pure Chardonnay from just five different Crus: Avize for verve and minerality; Cramant for complexity and ageability; Le Mesnil-sur-Oger for balance; Oger for creaminess and weight; and Vertus for floral freshness. An absolute masterpiece from the Côte des Blancs, this cuvée spends more than fifteen years maturing in the heart of Charles Heidsieck’s two-thousand-year-old chalk cellars.

2006 Vintage Report by Essi Avellan MW: A cold winter and some springtime frosts laid the foundations of this vintage of abundant yields (12,997 kg/ha). Uneventful flowering was followed by exceptionally hot and sunny weather, which lasted until August. A dank August left producers fearful but fortunately warm, bright conditions in September redressed the balance. Harvest commenced on September 9th producing grapes high in sugar level but notably low on acidity. The general health of the grapes was sufficient making the wines excel over the preceding 2005 vintage, another warm and ample one. The year’s wines are supple and expressive and despite the richness they escape being overly heavy. Overt and welcoming upon launch, the best come with excellent capacity for ageing. Winey, and richly fruity characters, most Champagnes regrettably miss some tension and finesse. 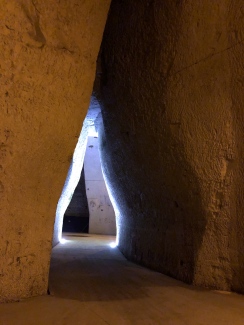 Charles Heidsieck Cellars – Crayeres No.9 of 47

The newer bottle shape with Charles Heidsieck and the gift box is inspired from a part of their cellars; Charles Heidsieck cellars are seven kilometres of tunnels built with a series of 47 Crayères or Cathedral’s connecting between the tunnels and they reach up to 30 meters in height. It is believed these were all dug out in the late Roman times around the 2nd and 3rd century. It is Crayères number 9 where there is an amazing shape in the tunnel, see the photo. It is chalks sponge like property that means it absorbs a lot of water and hence stays cool and damp at 11 Celsius all year round and makes the perfect storage conditions for champagne. A fantastic and very dramatic experience and these exist in all three neighbouring houses, Ruinart, Pommery and Charles Heidsieck who all share the same hillside on the edge of Reims where all three Maisons have these style of “Cathedral cellars”.

Essi Avellan MW – 94-96/100
The sixth creation of Blanc des Millénaires combines fruit from four grand cru villages (Oger, Le Mesnil-sur-Oger, Cramant and Avize) with Chardoonnay from the premier cru of Vertus. True to the sunny and warm year 2006, the wine comes with deep golden hued colour already upon launch. The nose is distinctly tropical with Charles Heidsieck’s hallmark toastiness emerging quickly in the glass. Beautiful coffee tones alongside candied lemon, baked pineapple and complex floral tones. The fruitiness is laudably clean and bright. The palate is round but soon after the initial feeling of richness, the wine’s minerality and high acidity kick in. The finish turns out to be long, pure and seemingly dry. An instantly open and generous Blanc des Millénaires with more complexity arising over time.

Nick Baker – The Finest Bubble – 18+/20
When 2004 was released back in early 2018 it was showing very differently to 2006. The 04 had plenty of fruit on the palate, but the aromatics were still very closed, if you taste it now it is just starting to show its potential, but only just, it needs time and over the next few years it will start to drink well, rewarding your patience. The BdM 2006 is quite different, like most 2006’s it captures the dominant sunny summer sunshine and radiates the vibrance of the long warm summer. Many of the Prestige Cuvee’s from 2006’s are champagnes to drink before the 2004’s and this Chardonnay rewards us straight from release. This doesn’t necessarily mean it wont age, as having tasted all seven of the Blanc de Blancs from Charles back to 1981 they are all still showing very well. As always store your champagne well, in the dark at 10-12 Celsius and it will reward you for decades. 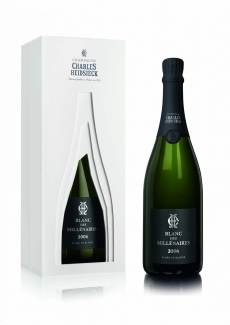 When we tasted 2004 with Cyril in 2017, he explained to us how the rare cuvée is made. “[BdM] is the easiest champagne to make on paper,” Cyril began. “The blend is always an equal 20% contribution from each of the five top Chardonnay Grand Crus: Avize, Cramant, Le Mesnil-sur-Oger, Oger and Vertus.” The final product is therefore a unique expression of the vintage and all five are subsequently quite different.

The Finest Bubble – Lots of creaminess already on the nose and some of that smoky character typical of the vintage. Very fine and beautiful pineapple and citrus notes; impressive steeliness and great length. Very fine indeed. Slightly lighter acidity than 1995.” 18.5/20