Of the three Champagne houses named Heidsieck – all originating from families once related – Charles is the smallest and arguably, the best. Established in 1851 by the nephew of Piper-Heidsieck’s owner, Charles Heidsieck himself was the original ‘Champagne Charlie’. Charles gained the nickname during his travels around America in the mid-19th Century – a country whose introduction to Champagne is credited to Charles. Today, production occurs alongside sister company Piper-Heidsieck in an ultra-modern functional wine-making facility on the southern outskirts of Reims.

After the hype around its Vintage Brut 2008, Charles has revealed the latest version of its Rosé Vintage 2008, in a new bottle known as “Crayère”. This champagne presents an excellent ageing potential, aged on the lees in Charles Heidsieck’s Gallo Roman Crayères (chalk cellars) for more than ten years. It is made from a selection of around fifteen Crus throughout Champagne. The grapes which contribute the red wine content originate from Ambonnay, Bouzy, Hautvillers, Les Riceys and Verzenay.

2008 was dominated by grey, overcast skies – an exception in a decade characterized by bold, generous sunshine. Spring and summer rought the same lack of sunlight and absence of high temperatures. It was September that saved the vintage, belatedly and miraculously. Just when the harvest was getting underway (on September 15), the weather conditions were finally perfect: with blue skies and prolonged north-northeasterly winds. Therefore picking was spread out over a long period in order to benefit from this positive turn of events. The result, grapes were riper than anyone dared hope, and had truly outstanding balance. The vines were in perfect health.

All previously released rose has been in the older style of bottle, this narrower neck in the new “Crayère” bottle should tighten and slow down the ageing and keep the champagnes fresher longer. Red wine makes up 9% of the blend with 50% of that from Les Riceys and 50 % Montagne de Reims from villages of Ambonnay, Bouzy and Ay – The red wine from the north, where they pick early, just before the grapes are too ripe allowing tighter phenolics for longer term aging and the Les Riceys grapes in the south allow riper fruit character as they are picked later. Due to this, the final blend is “tighter and riper.”

“Plush and silky thanks to 10 years of ageing on lees, it is a perfect accompaniment for grilled red mullet, a salmon tartar with citrus and fresh figs, or even just a not too-ripe Epoisses cheese.”

Saline and mineral underlined by toasted aromas and notes of blood orange and red currant. This long awaited Rosé already displays all the elegance and finesse of an outstanding vintage. The finish is long and creamy, with extremely delicate effervescence at the very end. It is paradoxical to find a wine of such great freshness paired with a structure of such restrained power. 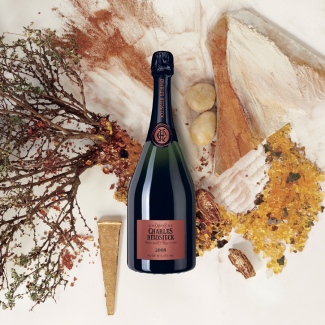 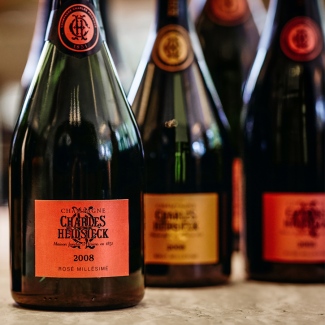 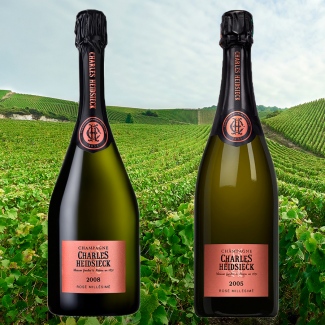 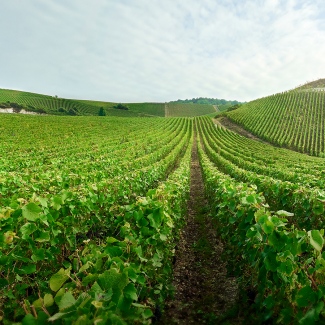 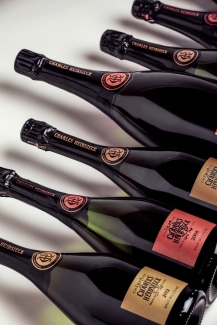